Posted on October 26, 2014 by Remember Singapore

Fountains were originally used to provide drinking water for the public, especially in the early Western civilisations. The ancient Romans were among the first to use fountains as decorative ornaments for their cities. During the 7th century, the Arabs built the famous Islamic gardens with elaborated use of fountains as part of their landscapes.

In Singapore, the first public drinking fountain appeared in 1864 through the donation by English merchant John Gemmill. After Singapore’s independence, fountains were popularly used to beautify new towns, roundabouts and landmarks.

How many iconic fountains in Singapore do you remember? (The list below is not in any alphabetical or chronological order)

Constructed in 1995, the Fountain of Wealth at Suntec City stands 13.8m tall and is mainly made of silicon bronze. Listed by the Guinness Book of Records as the largest fountain in the world in 1998, the iconic structure represents the unity and harmony among Singapore’s various races, with its design inspired by Hindu mandala.

There is also fengshui element incorporated into the fountain’s design and location. The five tower blocks symbolise the “thumb” and “fingers”, and the fountain is situated at the “palm” where the wealth, represented by the inflowing water, pours in.

It took a total of 10 years to build the iconic Sentosa Musical Fountain. Construction began in 1972, the same year Sentosa was officially slated for development. Costing as much as $3.2 million, the star attraction of Sentosa would be located at the northwestern part of the island named Imbiah Bay.

The Musical Fountain was officially opened in June 1982, and was at one time the largest outdoor fountain in Asia. Able to accommodate 5,000 people, the fountain became the popular venue for a series of shows, events and displays. In 1996, the gala dinner of the World Trade Organisation’s Ministerial Conference was held at the Musical Fountain.

For its 25 years of history, the fountain was regularly renovated and restored, with artificial cliffs, colonnades and waterfalls added. In 1996, the gigantic 37m-tall Merlion statue was built, and the laser light beams shooting from its eyes became part of the Musical Fountain’s shows.

Together with the Musical Fountain, the Fountain Gardens promenade was another attraction of the island. Opened in 1989, it was located between the former Ferry Terminal and the Merlion statue, and consisted of many features such as dragon sculptures and European-style gardens that were inspired by French and Italian Renaissance designs. 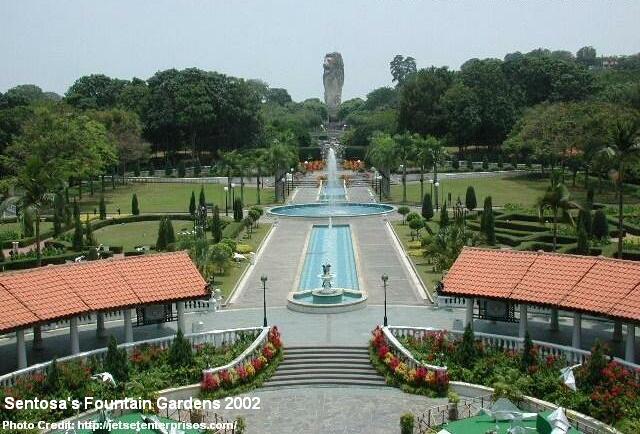 After years of decline in visitorship, the Musical Fountain, Fountain Gardens and Ferry Terminal were shut down in March 2007 and subsequently demolished. They were later replaced by the Resorts World Sentosa.

The 15m-tall Kallang Park Fountain was erected by the Singapore Chinese Chamber of Commerce as a gift to the City Council of Singapore. Designed by Messrs H. Sena, the fountain was an eye-catching attraction when the $50-million Singapore Constitution Exposition was held in early 1959 at the disused runway of the former Kallang Airport.

In the 1960s, the Kallang Park, with its spacious premises, playground and sport facilities, was a popular venue among the locals. It was situated at a short distance away from Dakota Crescent and its iconic seven-storey red-brick SIT flats that were mostly built in 1958.

The Raffles Place Park was a decorative garden on top of the underground carpark where the Raffles Place MRT Station is today. The fountain, along with flower beds, lawns and a giant Seiko-sponsored clock filled up the garden that was extremely popular with the public in the sixties and seventies.

The underground carpark, however, had to give way to the construction of the new MRT station in the eighties, and together with it, the demolition of the garden and its ornamental fountain.

The National Theatre, fondly remembered by the older generations of Singaporeans, was an iconic landmark standing on the slope of Fort Canning Park along River Valley Road. Also known as the “People’s Theatre”, its construction was made possible by the generous donations from people from all walks of life.

The theatre’s distinctive design of five-pointed facade and fountain represented the stars and crescent of Singapore’s national flag. It was the brainchild of local architect Alfred Wong, whose firm won the design competition to build Singapore’s first national theatre.

Opened in 1963, the National Theatre was the selected venue of many important events and performances. Its usage, however, had gradually declined by the early eighties. Its damaged cantilever roof, lack of air-conditioning facility and the plan to build the Central Expressway’s (CTE) underground tunnel close to its site led to the government’s decision to shut down the National Theatre in 1984. It was subsequently demolished two years later.

Now a national monument and landmark at Esplanade Park, the Victoria-styled Tan Kim Seng fountain was first installed at Fullerton Square in 1882 by the Municipal Commissioners to commemorate local Chinese merchant and philanthropist Tan Kim Seng’s (1805-1864) generous contributions to the construction of Singapore’s waterworks and MacRitchie Reservoir.

Specially built by Andrew Handyside & Co from England, the fountain towers at 7m tall and has decorations made up of classical figures. In 1925, it was relocated to Esplanade Park where it stood close to the coastline. Today, the fountain remains at the same position where it has been standing for the past 90 years, but the coastline has now shifted away from it due to the land reclamation.

Tan Kim Seng Fountain was given a massive restoration in 1994, where its water spout, lighting and pumping system replaced. Seven years later, it was gazetted as a national monument.

Singapore’s first public drinking fountain, the Gemmill Fountain was donated by John Gemmill in 1864. An English auctioneer, banker and storekeeper, John Gemmill had lived in Singapore between the 1820s and mid-19th century, and later had Gemmill Lane named after him.

The Gemmill Fountain, made of marble with water spouting from the mouth of its carved lion head, is more of a drinking facility than a fountain. Its original location was unknown, but records show that it had been installed at Empress Place between 1939 and 1947, and Raffles Place in the early 20th century and the fifties. The fountain was damaged during the Second World War. It was later passed to the National Museum of Singapore in 1967. After a brief moment at the Heritage Conservation Centre, the fountain was returned to the museum with a fully restored and functional water spout.

Tourists and visitors arriving at the former Paya Lebar International Airport would be greeted by an pyramid-shaped fountain that displayed the message “Welcome to Singapore”. Standing in the middle of a roundabout, the fountain was sponsored by Philips, which had established in Singapore in 1951, five years before the airport was opened.

In May 1955, the Paya Lebar International Airport became operationally ready. Costing a hefty $35 million in construction cost, the airport’s 2.4km-long runway was capable of handling the largest commercial aircraft then. The airport had served well for more than two decades until the late seventies, when it began to have difficulties coping with the increasing annual traffic in passengers.

A new arrival terminal was built in 1977, but just four years later, the airport’s civil aviation operations were officially ceased, replaced by the new international airport at Changi. The premises of the Paya Lebar International Airport was later taken over by the Republic of Singapore Air Force (RSAF).

Fountains were popularly used as part of the public amenities at the town centres of the new towns built in the seventies and eighties. The town centres of Ang Mo Kio, Toa Payoh and Clementi used to have large iconic fountains, where residents would sit leisurely around the fountains during the evenings and watch jets of water pumped into the air. 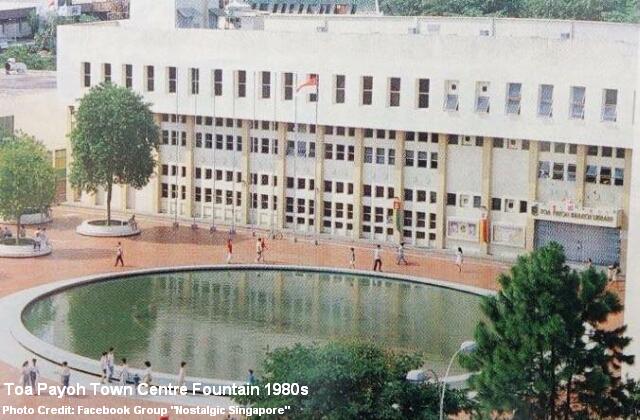 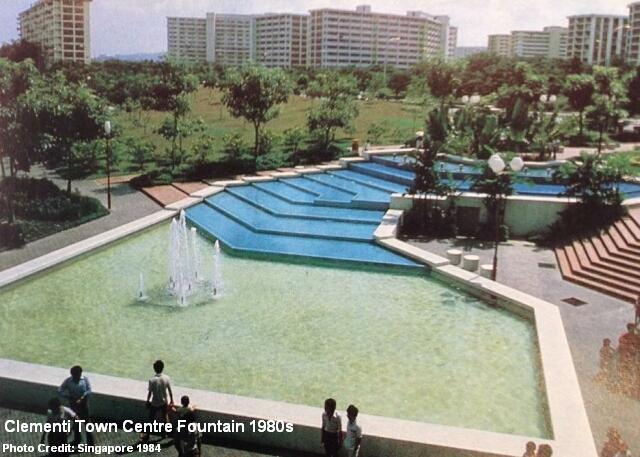 Over the years, however, the public interest waned as the fountains gradually fell into disrepair. The water dried up as the pumps stopped functioning, and loads of dry leaves started accumulating in the empty fountains, making them an unsightly feature in the neighbourhoods. By the late nineties and early 2000s, most fountains at the town centres were eventually dismantled and demolished.

Like a dragon well hidden in the middle of a heartland, the Whampoa fountain is perhaps not as famous as other iconic fountains in Singapore. Built in the seventies, one can only imagine how the oriental-inspired fountain looks like during its glorious days, when streams of water were constantly spouted from the mouth of the majestic dragon. 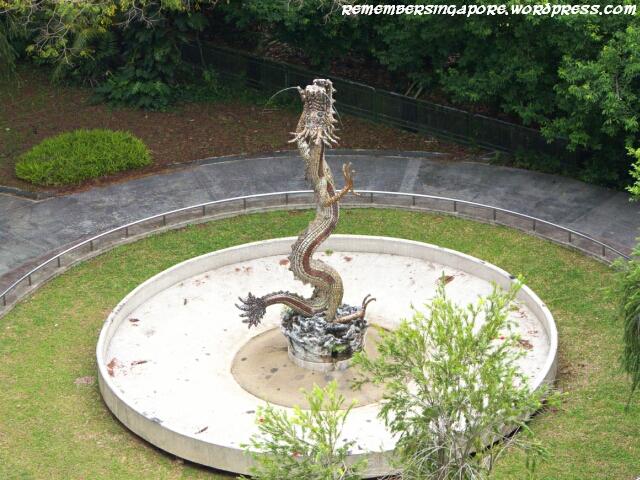 Today, the dragon cuts a sad figure as it is nothing more than a statue in the middle of an empty reservoir. But it remains an important and symbolic icon in the hearts of the Whampoa residents, who had strongly petitioned against the demolition of this defunct fountain during the late nineties.

Like the town centres, roundabouts were once favourite venues for the construction of water fountains. Roundabouts, or circuses, were preferred at the junctions of major roads, before the traffic light system became widely used in the seventies.

Before the Holland Road Flyover was completed in 1996, there was a roundabout at the junction of Holland Road and Farrer Road. Named Farrer Circus, it had a fountain that was opened in June 1966 by then-Minister for Law and National Development E.W. Baker. 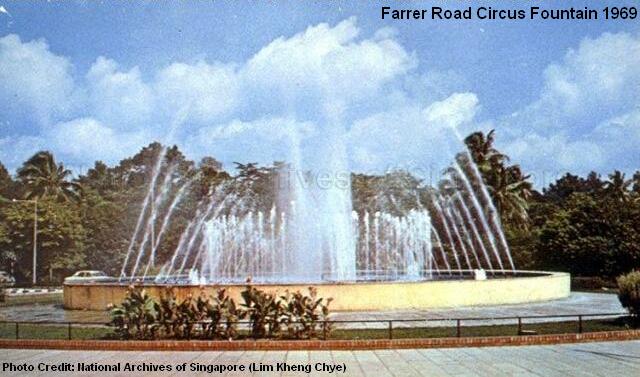 In the same year, another water fountain was unveiled at Tanglin Circus by former Minister for Culture and Social Affairs Othman bin Wok. Built by the Public Works Department (PWD) at a cost of $98,000, the fountain’s central jet of water was able to hit a height of 7.6m. At nights, the 50m-diameter fountain was illuminated with coloured lights that formed a perfect picture with the Hotel Malaysia (later Marco Polo Hotel) in its background.

The Tanglin Circus Fountain was the third fountain commissioned by the Singapore government, after the Farrer Circus Fountain and the crescent-shaped fountain in front of the National Theatre. It, however, only lasted a decade before its demolition in 1977.

Another famous roundabout, the Newton Circus, also had a fountain installed in 1970.

The 6m-tall cast-iron fountain currently standing at the Palm Garden of Raffles Hotel had a significant history. Originally made in Glasgow, Scotland, it was located at centre of the Telok Ayer Market (now Lau Pa Sat) in the late 19th century, where the iron structure of the market was also imported from Glasgow.

In 1902, the fountain was shifted to the Orchard Road Market, built in 1891. After the 80 years of operation, the market was closed and demolished in the seventies, and the iron fountain was kept and forgotten. It was not until 1989 when the fountain was rediscovered, and subsequent found a new home at the newly-restored Raffles Hotel.

The Raffles’ Statue and Fountain (1919-Present)

In 1919, the statue of Sir Stamford Raffles was set up at Empress Place, in front of the Victoria Memorial Hall, to commemorate the 100 years of founding of Singapore. Originally installed at the middle of the Padang in 1887, the bronze statue, at its new location, was decorated with a grand semi-circular colonnade and a marble-lined fountain pool.

During the Japanese Occupation, the Raffles statue was moved to the Syonan Museum (originally Raffles Museum, and today’s National Museum of Singapore). It was returned to its previous site at Empress Place after the war. The colonnade, however, was said to be missing or destroyed. The statue and fountain remain at the front of the Victoria Theatre and Concert Hall till today.