This is a continuation from the previous article Old, Common Names of Places in Singapore, and their Origins.

Other than names of our pioneers, early local merchants or governors of Straits Settlements, many roads in Singapore are  also named after various items, cities or simply one reason or another.

Even Singaporeans are unaware of the existence of some of the roads!

Do you know while there is a Sunset Way at Clementi, there is also a Sunrise Way off Yio Chu Kang Road? Find out more…

Somewhere off Upper Serangoon Road, there are two minor roads which are interestingly named after fruits: Lorong Lew Lian (罗弄榴莲) and Lorong Ong Lye (罗弄黄梨). The reason is unknown, perhaps in the past there were durian and pineapple plantations around the area. Jalan Durian can be found on Pulau Ubin. There was once a Lorong Koo Chye (罗弄韮菜) at Upper Paya Lebar, but it became defunct when Tai Seng-Ubi was developed into an industrial estate.

At MacPherson, there is a network of “fruit-tree” roads which include Lichi Avenue (Lichi is a variant spelling of litchi, or lychee), Cedar Avenue (Cedar trees, native in Southeast Asia and Australia, produce bluish fruits that are poisonous to humans), Mulberry Avenue (Mulberry is native in subtropical regions of Asia, Africa and Americas), Angsana Avenue (common tree found in Singapore with a flat disc-shaped fruit), Kenanga Avenue (Kenanga is the Indonesian name for Ylang-Ylang, a perfume tree with black fruits) and Belimbing Avenue (Belimbing is the Indonesian name for starfruit).

At Bukit Panjang neighbourhood, a series of minor roads, drives and crescents are named after nuts, namely Almond, Cashew, Chestnut and Hazel.

Prince Charles Crescent and Prince Phillip Avenue are two parallel roads along Alexandra Road, while King Albert Park is a minor road at the junction of Bukit Timah Road and Clementi Road, and King George’s Avenue is found at Jalan Besar.

King’s Road and Queen’s Road are not to be confused with King’s Avenue and Queen’s Avenue located at Sembawang. There is a Queen Street in the City but no King Street exists in Singapore. There is a Jalan Rajah (“king” in Malay) at Balestier though. 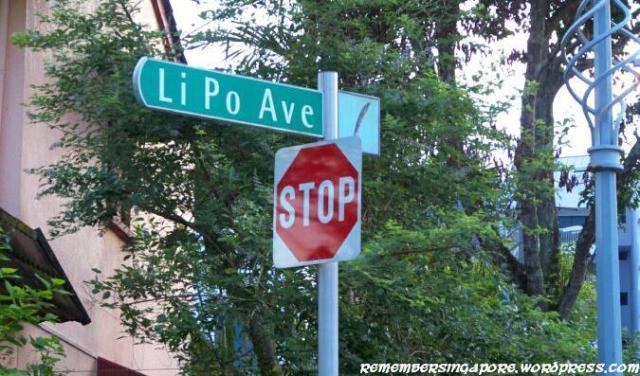 There are many roads in Singapore that are named after cities or places of other countries in the world. 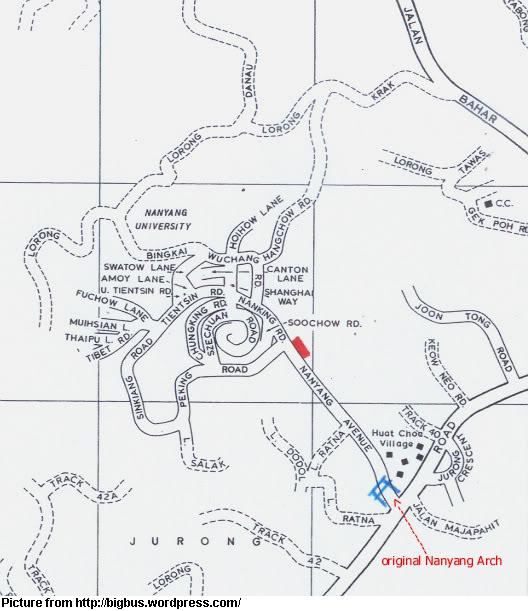 Interestingly, during the days of Nanyang University (1956-1980), many roads inside the campus were named after cities and places of China, as seen in the map above. There were the likes of Peking (北京), Sinkiang (新疆), Tibet (西藏), Fuchow (福州), Swatow (汕头), Amoy (厦门), Thaipu (大浦), Wuchang (武昌), Szechuan (四川), Chungking (重庆), Nanking (南京), Tientsin (天津) and Hangchow (杭州). All these roads were defunct after the university shut down in 1980.

A Ceylon Road can be found along East Coast Road. Ceylon is the former name of Sri Lanka from 1948 to 1972. The name of Kadayanallur Street, which is off Maxwell Road, is derived from an Indian city. So is the nearby Banda Street.

Interestingly, the road connected to Kadayanallur Street is called Erskine Road, where Erskine is a Scottish town. Glasgow Road is in Kovan, where Glasgow is the largest city in Scotland. Ireland’s capital, province and townland are also reflected in Dublin Road, Connaught Drive and Killiney Road. French Road is near Jalan Besar Stadium.

There is also the Hongkong Street between New Bridge Road and South Bridge Road.

The famous Kwan Im Thong Hood Cho Temple stands on Waterloo Street, which was named after the Battle of Waterloo where the Duke of Wellington Arthur Wellesley claimed a famous victory over Napoleon Bonaparte. Waterloo is a municipality in Belgium.

Residents going to the Aljunied Park will probably feel a sense of joy as the network of roads beside the park are named Happy Avenue. Indeed, it is said the area, once part of MacPherson, had a theme of contentment and virtues for happiness. One cannot say the same for the Sembawang folks with its Jalan Malu-Malu (Malu-malu is affectionately shy or modest in Malay) off Sembawang Road.

Meanwhile, people staying at Kay Poh Road will not be pleased if anyone calls them busybodies. Kay Poh Road, however, was named after Wee Kay Poh (黄继宝) who was a former apprentice at A.L. Johnston & Company in the 19th century and later became the owner of opium and liquor business.

Roads of No Names

Many small roads of the early days still exist in the under-developed parts or restricted areas of Singapore. They have no official names and are simply called… tracks. They usually come with a single- or double-digit suffix.

Punggol Road has a Track 24 leading to a fishing pond, while there is a Track 14 off Old Choa Chu Kang Road that enters a Chinese cemetery. Mandai Road’s Track 7 and Track 16 are still around, but the tracks at Lim Chu Kang Road (Track 11 & 13) and Jurong Road are now defunct.

Both Punggol and Ponggol were in use since the early days. Today, the name Punggol is being used officially, whereas the name Ponggol is now only found at the small roads of Ponggol Seventeenth Avenue and Ponggol Twenty-Fourth Avenue.