For years, it has been a common assumption that the new town of Simei (四美) is named after the four legendary beauties of ancient China (Xishi 西施, Diaochan 貂蟬, Wang Zhaojun 王昭君, Yang Yuhuan 杨玉环). It may be one of the misnomers of the names of places in Singapore, as there are few reasons to name a local housing district built in the eighties after some ancient figures in China history.

This was, however, not uncommon in the 19th century, where streets around present-day Raffles Place were named after the hometowns of the early Chinese immigrants, such as China Street, Nankin Street, Pekin Street, Canton Street, Hokien Street and Tew Chew Street.

The name Simei was actually derived from Jalan Soo Bee (惹兰四美), a minor road still existing near Upper Changi Road today. But it remains unknown whether Jalan Soo Bee was named after the four beauties even though its Chinese name suggested so.

Yishun and Sengkang are two other examples in a unique group of new towns with names derived from the streets. Yishun was the hanyu-pinyin version of the old Nee Soon Road, whereas Sengkang was named after now-defunct Lorong Sengkang. The expunged Lorong Lentor, off Yio Chu Kang Road, gave rise to Lentor Avenue and a network of roads within the private residence along the arterial road.

During the peak of the Speak Mandarin Campaign and the hanyu-pinyin‘isation of names, old names such as Nee Soon, Tekka and Bukit Panjang were changed to Yishun, Zhujiao and Zhenghua respectively. The changes did not appeal to the public, and caused much confusions that the authority reversed their decisions of renaming Tekka and Bukit Panjang. On the other hand, the newly-built housing estates of Bishan, Hougang and Simei were named accordingly, discarding their dialect versions of Peck San, Ow Gang and Soo Bee.

The misconceptions seemed to have began during the early development of Simei New Town in the mid-eighties. Art installations were installed at the park depicting the four beauties, leading to the beliefs that the new town was named after them. The installations were later replaced by new portraits at the HDB void decks.

The main streets at Simei New Town were originally named as Xishi, Diaochan, Zhaojun and Guifei Roads. They were later renamed as Simei Street 1 to 4 in mid-1987 after the names were deemed too difficult for the non-Chinese residents living in the vicinity. Some residents also proposed changing the name of Simei to a more localised one such as Somapah New Town, but the suggestion was not taken up.

By 1988, the construction of Simei was basically completed with a total of 8,000 four- and five-roomed units. Due to the nearby Changi Airport, the flats in this eastern housing estate were built not taller than 11 storeys. As for the misnomer, it has somehow become acceptable that the four beauties would continue to represent Simei New Town. 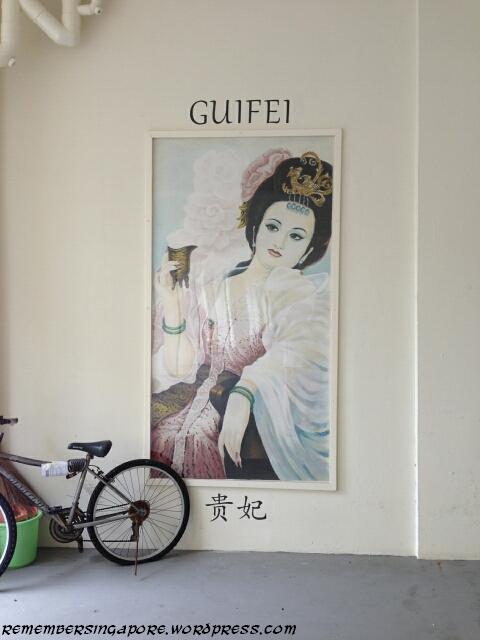 Today, the portraits of Diaochan, Zhaojun and Guifei can be found at the void decks of Block 146 (Street 2), Block 226 (Street 4) and Block 107 (Street 1) respectively, whereas there are two Xishi portraits at Block 116 and 123 of Simei Street 1. Over time, these void deck portraits have become a unique feature of Simei, not seen in any other new towns of Singapore.