A Military History of Singapore’s Pillboxes

A pillbox is a small concrete fort that is built partially underground. Forming the first line of defence, pillboxes were normally located near the coastline, providing protection to soldiers who aim and fire at the enemy ships and troops attempting to land on the shore. Others were constructed on small hilltops due to strategic reasons or in order to defend critical military installations. 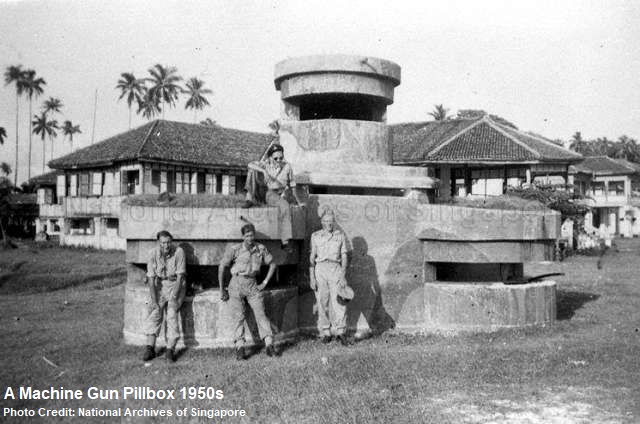 Together with machine-gun outposts, citadel-like gunfire-director towers, concrete gun-pits, underground bomb shelters and bunkers, the pillboxes formed an effective pre-war defensive infrastructure used by the British. Their different sizes and heights also allowed the soldiers to take positions at better efficiency against the invaders.

In 1927, General Webb Gillman of the Royal Artillery, who later had Gillman Barracks named after him, came to Singapore for three months to prepare his report of a new naval base for the colony. One of his requirements was the pillboxes along the coastline, as part of the defensive strategies against aggressors. 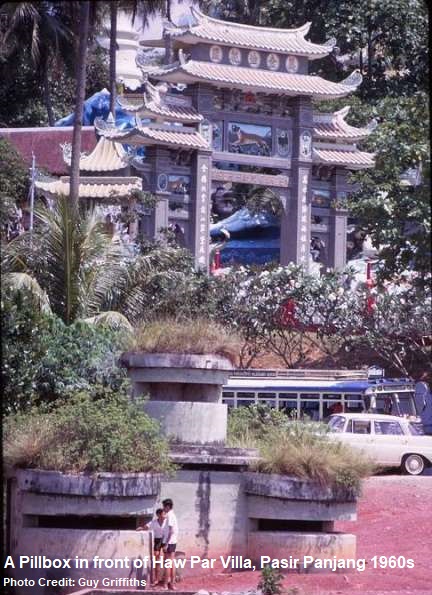 Hence, the British began installing many pillboxes in Singapore, including the island’s northern stretch from Kranji to Punggol, Sembawang and Changi. On the southern side, they were built along Pasir Panjang, Labrador and East Coast.

At Bedok, a number of pillboxes were constructed, including one on top of a hill where Kew Drive is today. Another was built in front of the Bedok Rest House, and several others at present-day Bedok South Road and Kee Sun Avenue. Further east, there were also pillboxes at Ayer Mata Ikam and Kampong Terbakar. 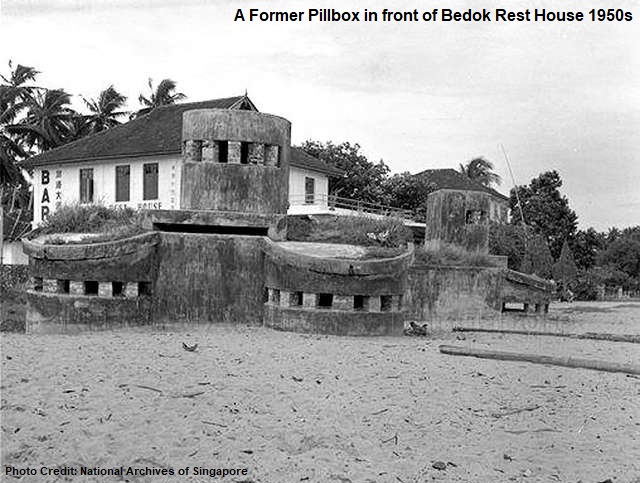 Numerous pillboxes were also deployed at the outlying islands such as Pulau Sajahat, off Changi Point. The military installations on Palau Sajahat were put up to defend the waters between Changi and Pulau Tekong, but they were never been used during the Japanese invasion. Today, the little island has been absorbed into a greater Pulau Tekong through land reclamation.

Pulau Belakang Mati (present-day Sentosa) had a number of pillboxes as well, as more military emphasis was placed at the southern island due to the British’s anticipation of an attack from the south. Most of these pillboxes were demolished in the seventies when the island was redeveloped into a tourist destination. Only a couple of them – a small one located at Siloso Beach and another at Palawan Beach – survive till this day. 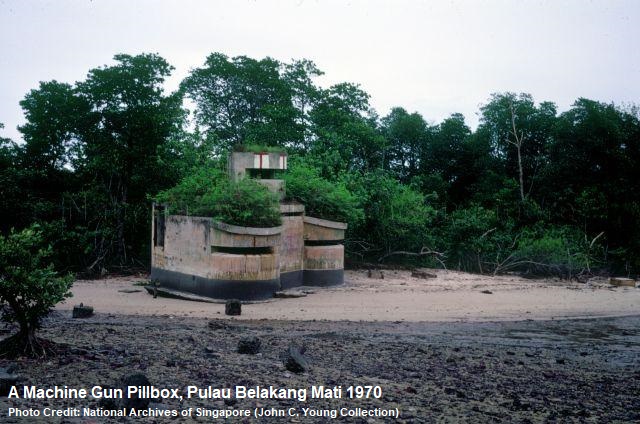 There were pillboxes constructed by the Japanese too, after they annexed Singapore during the Second World War. After the war, these pillboxes were quickly demolished under the orders of the returning British. One such pillbox was at Raffles Place, near the Chartered Bank at Chulia Street. The Japanese prisoners-of-war were given a week to demolish the concrete installation and clear the debris.

Subsequently, the Japanese prisoners-of-war were ordered to demolished several other pillboxes by late 1946, including one that was located at the junction of Chancery Lane and Thomson Road. Another piece at the junction of Tanjong Pagar Road and Anson Road was also torn down to make way for traffic entering and exiting the docks.

Over time, pillboxes became forgotten war relics. Many were covered by thick vegetation; some, like those at Punggol end, were utilised as storage compartments before they were eventually removed in the eighties. 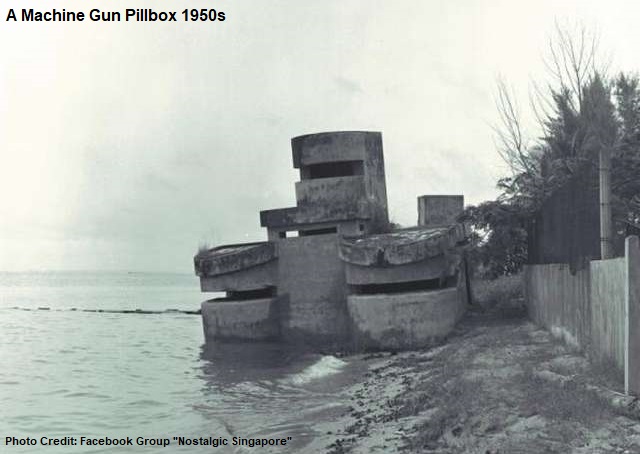 In the seventies, the pillboxes at Changi were removed to make way for the massive land reclamation and the subsequent construction of Changi Airport. Other pillboxes in Singapore were also torn down; most of their demolition were due to road works or other development projects.

At Labrador Park, a temple was built over a Second World War pillbox. Named Mountain Sea Temple, the place of worship faced the sea and housed Guanyin, the Goddess of Mercy, and Tua Pek Gong, the Prosperity God. In the late eighties, there were even heritage tour groups visiting the temple and its pillbox underneath. The temple, however, is no longer present today.

As most pillboxes were demolished over the decades, there are only a few left in Singapore today. Among these rare remnants of the Second World War artefacts, the Labrador Park pillbox has been well preserved till this day. Designed with two levels of machine gun slots pointing at the sea, this pillbox’s main role was to protect the 12-pounder guns mounted at the top of the hill, know as Berlayer Point, situated just behind the pillbox. 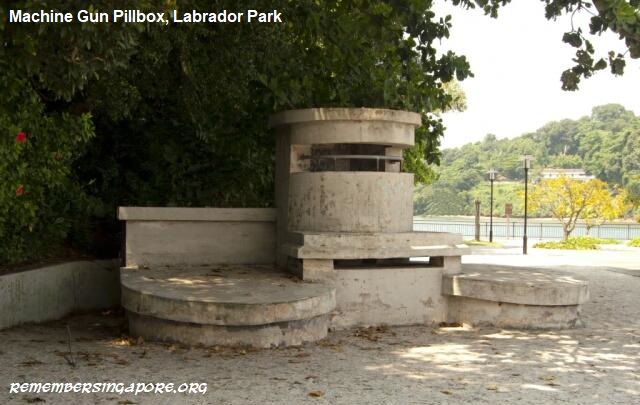 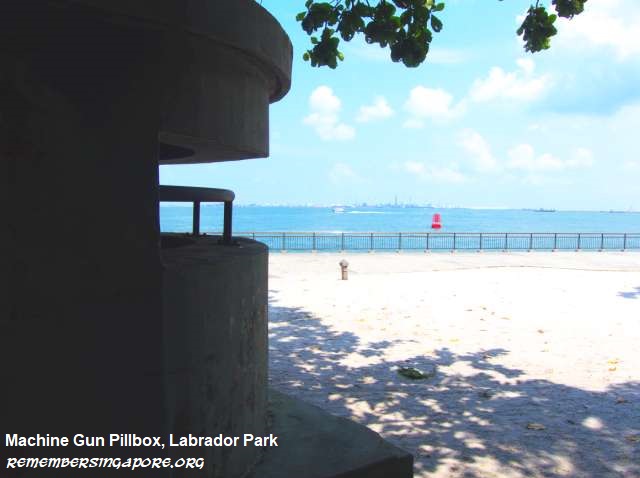 Pillboxes of designs similar to the Labrador Park pillbox were once common but can hardly be found in Singapore today. The pillbox situated along Pasir Panjang Road has a different design – it was built in a box shape.

During the Second World War, it lied within the defensive sector of the 1st Malaya Brigade. The Malay Regiment could have used it during the fierce defence of the Pasir Panjang Ridge in February 1942 against the advancing troops of the Japanese 18th Division.

Designed to fit only one or two soldier armed with machine guns, the small round-shaped Sime Road pillbox was possibly built for the defence of Sime Road Camp prior during Second World War.

After the fall of Singapore, Sime Road Camp was taken over by the Japanese to intern both military and civilian prisoners-of-war, including several high-ranking European government officials and their family members.

The pair of pillboxes at Sembawang’s Bermuda Road is relatively less known as compared to ones mentioned. The squarish pillboxes are located on a small hilltop, partially exposed on the slope and overseeing the Sembawang Shipyard. Not much historical facts have been uncovered for them, but it can be assumed that the Bermuda Road pillboxes were intended for the defence of the former Sembawang Naval Base.

The pillboxes’ machine gun slots have since been sealed up, and the entrances to their ditches are buried underneath the ground. 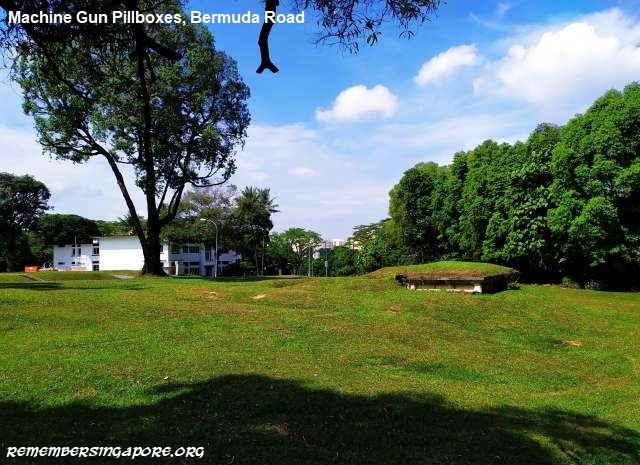 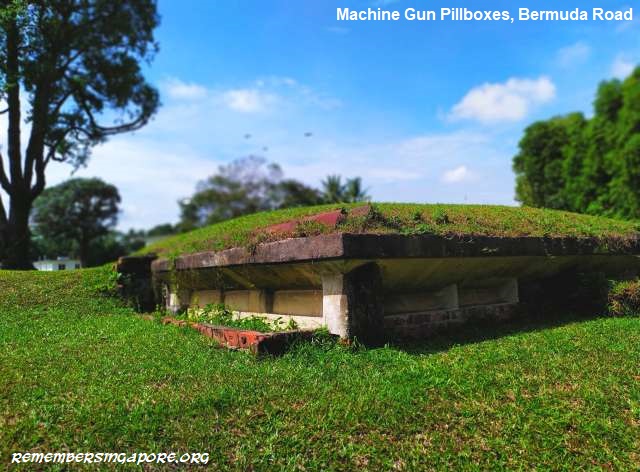 5 Responses to A Military History of Singapore’s Pillboxes