The Vanished Colourful Landmark of Rochor

The colourful Rochor Centre flats, previously bounded by Rochor Road, Ophir Road and Queen Street, had seen their demolition completed. Motorists could no longer see the eye-catching landmark on their ways along the busy Rochor Road and Ophir Road.

The Rochor-Selegie vicinity had seen vast changes in the past 150 years. Largely a land of spice plantations in the early days, it became a transport hub of jinrikisha by the end of the 19th century, where thousands of rickshaw pullers would gather at Rochor Canal Road. In the 1920s, the growing Indian immigrant community made Selegie and Rochor Roads their venues for performance of traditional dances and cultural shows. In fact, the Tamil name for Rochor means “old Hindu theatre”. 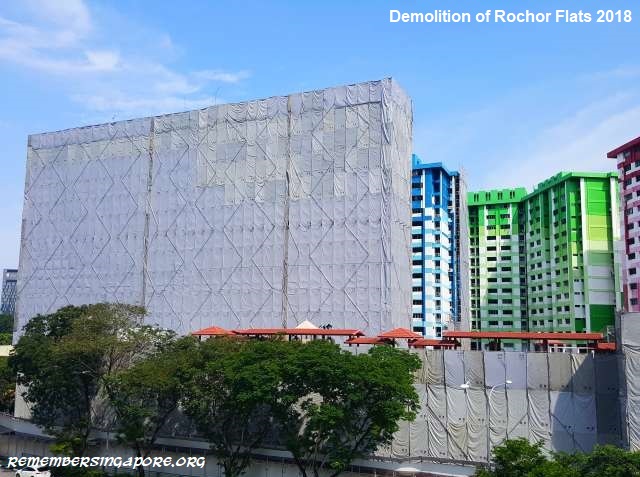 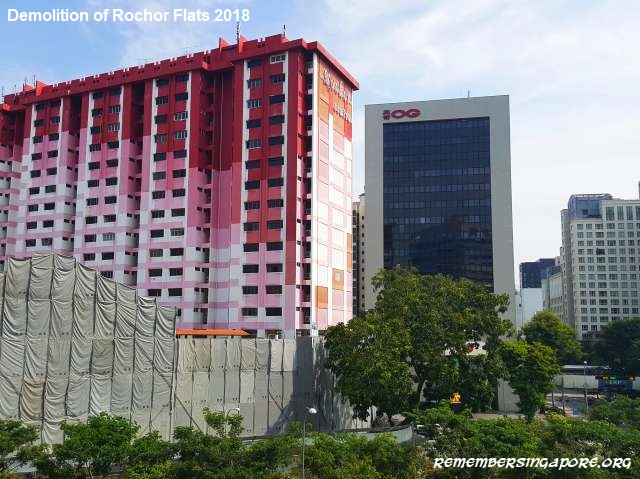 The first double-storey shopshouses at Rochor appeared as early as 1836. Numerous other landmarks, over the decades, emerged in the vicinity; the Rochor wet market at Sungei Road was established in 1872, The Church of Our Lady of Lourdes completed in 1888, the famous Thieves’ Market in the 1930s, and the Singapore Ice Works, Singapore’s first ice-making plant, in the fifties.

After independence, the eighties saw the rapid rise of retail and office towers at the Rochor area, among them were the Sim Lim Tower (opened in 1980), Fu Lu Shou Complex (1983) and Sim Lim Square (1987). OG Albert Complex was completed in 2000.

In the seventies, the Housing and Development Board (HDB) embarked on a massive project to increase the public housings at Singapore’s central area. Public housings were not new to the areas around or within the city. The Singapore Improvement Trust (SIT) flats had already been standing at Tiong Bahru, Upper Pickering Street and Prinsep Street for years. The Selegie House was completed by the HDB back in 1963.

Under HDB’s plan, new multi-storey complexes and plazas would be constructed at Tanjong Pagar, Kreta Ayer, Jalan Besar, Kampong Glam, Anson, Havelock, Telok Ayer and Rochor. The government’s aim was to raise the residential population at the Central District from 220,000 in the mid-seventies to 280,000 in the mid-eighties.

The design for the central area’s flats typically consisted of features such as podiums made up of commercial units, shops, supermarkets, banks and post offices. On top of the podiums would be the residential flats of mostly three-room units. In the late-seventies, these units were priced between $12,800 and $19,500.

Besides the necessary amenities, HDB also incorporated different elements to the various housing projects in order to enhance their distinctive designs, which included children’s playgrounds and pockets of green areas. By 1977, the HDB had successfully completed Rochor Centre (with four blocks of 481 three-room and 91 four-room units), Tanjong Pagar Plaza (924 three-room units) and Kelantan Complex (281 three-room units).

The residents of the Rochor Centre flats enjoyed the convenience of the amenities almost immediately after the completion of their flats. At the podium were hardware shops, electronic stores and music schools. The new post office was opened at Block 4 in 1977, replacing the Kandang Kerbau Post Office. In the same year, the Development Bank of Singapore (DBS) also added its 11th branch at Rochor Centre. The once-popular Oriental Emporium moved in in the early eighties.

Rochor Centre was a popular venue too, for different community and social events in the late seventies and eighties. Rochor constituency’s carnivals, Talentime contests, blood donation drives, unions’ ceremonies and National Day celebrative dinners were regularly held at the podium of the new Rochor Centre.

By the mid-eighties, Rochor Centre became a go-to shopping paradise for the foreigners, especially the Malaysians. It was a golden period for the 200-plus shops at Rochor Centre, which offered a wide range of affordable products from textiles and clothing to leather goods and household utensils. There were also half a dozen of goldsmiths and jewellery shops, profiting from the booming business supported by the Malaysians, Indonesians, Thais, Indians and Sri Lankans. 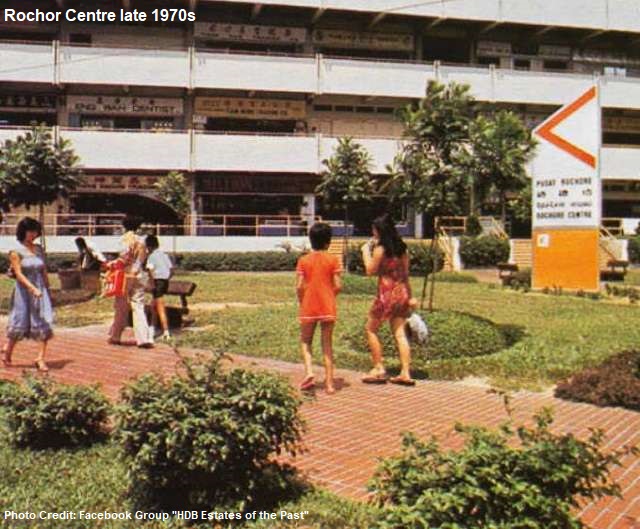 Although the Queen Street Taxi Terminal and Bus Terminal were established only in the mid-eighties, taxis and buses between Singapore and Johor had been plying their trades at Rochor Road for many years, fetching passengers from the other side of the causeway to patronise the shops and businesses at Rochor Centre. By the early eighties, Rochor Centre became popularly known as “Little Johor”.

The good times did not last, however, as some shop owners saw their rental costs jumped from $1,100 to $2,800 after their five-year leases expired. When Singapore fell into its first recession in 1985, many at Rochor Centre were hit hard. Sales slowed, and the shops saw an estimated decline of 30% to 50% in their businesses.

Rochor Centre also faced other social issues in the eighties. Lift robberies and thefts at the shops and carparks happened every now and then. But none of the crimes shook the headlines as much as the $1.2 million break-in burglary of a goldsmith shop in 1986. The burglars were said to have broken into the shop through a hole they created in the toilet floor of a company directly above it. Using ox-acetylene torches, they cut open the vault doors and safes, stealing all the jewellery and cash.

In 1988, another goldsmith shop at Rochor Centre suffered massive losses from a robbery, committed in blatant audacity. This time, four robbers, in red masks, barged into the shop when it was about to close. Armed with hammers and parangs, they smashed the showcases and scooped the valuables, before getting away in a stolen car with $500,000 worth of jewellery. 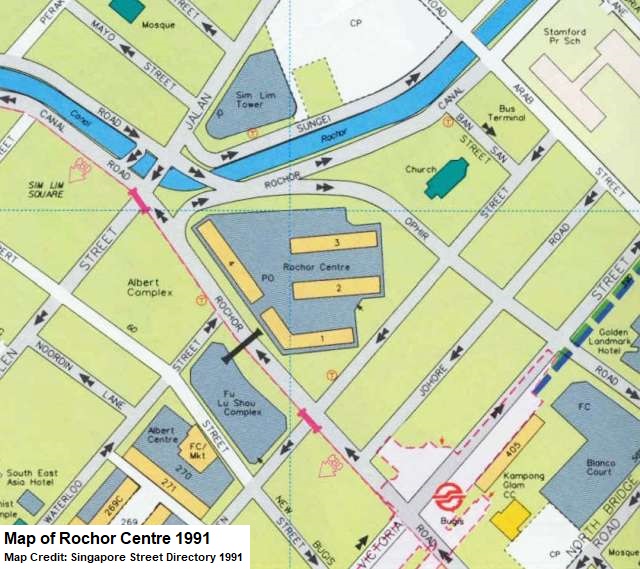 In 1994, 99% of Rochor Centre’s residents voted for the $5.5 million Interim Upgrading Programme (IUP) which would enhance their estate’s appearance and amenities. Each of the four blocks were given fresh paint coats in vibrant blue, green, red and yellow, transforming them from the normal-looking flats into the appealing colourful Rochor icons for the next two decades.

In 2011, it was announced that Rochor Centre would have to make way for the upcoming North-South Corridor. The residents moved out by end-2016, and demolition works began in June 2018. By April 2019, the 40-year-old multi-coloured trademark blocks of Rochor were gone.

A walk down the memory lane of Rochor Centre: 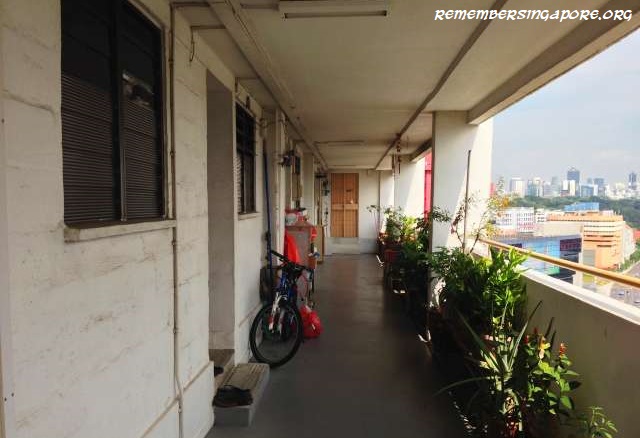 1 Response to The Vanished Colourful Landmark of Rochor