Emerald Hill – A Gem at Orchard

Posted on February 26, 2021 by Remember Singapore

The beautiful Emerald Hill area today was originally a jungle when the British first arrived at Singapore. The trees were cleared between 1819 and 1836 to provide fuel for the boiling of gambier leaves. After decades of exploitation, Emerald Hill became a barren wasteland, and was leased in 1837 to William Cuppage (1807-1872), who was originally a postal clerk in Singapore in the early 1830s and had worked his way up to become the Acting Postmaster-General in 1856.

In 1845, William Cuppage was granted the permanent ownership of Emerald Hill, where he planted vast nutmeg plantations and built two villas for himself called Erin Lodge and Fern Cottage. The nutmegs, however, failed in the 1860s due to diseases and falling prices.

When Cuppage died in 1872, he left the plantations to his three daughters. One of Cuppage’s son-in-law Edwin Koek, a lawyer and Municipal Commissioner, purchased the estate. Both Cuppage Road and Koek Road were named after William Cuppage and Edwin Koek respectively.

In the following decades, Emerald Hill had changed ownership several times. In 1900, the estate was purchased by local Chinese businessmen Seah Boon Kang and Seah Eng Kiat, who then carved up the land into smaller lots and sold them to individual owners who built the first terrace houses and shophouses at Emerald Hill. Many of these early terrace houses of Emerald Hill were designed in Georgian and Regency styles, with added touches of Chinese Baroque elements especially in their façades, wall ornaments and ceramic floor tiles.

The Emerald Hill of the early 20th century soon became a residential enclave for the wealthy local Chinese and Peranakan businessmen and their families. During this period, a typical Emerald Hill terrace house would cost about $3,000. It was a bustling place then, where many rickshaws and horse drawn carriages plied the roads.

The Orchard Road Market, situated between Cuppage Road and Koek Road, was the go-to place for the Emerald Hill residents to get their fresh produce and groceries. There was also the Singapore Cold Storage that catered mainly to the European residents living in the Orchard area. Opening in 1905 at the site of present-day Centrepoint, it was Singapore’s first supermarket.

The increasingly crowded Emerald Hill saw more street hawkers moving into the area to sell food and other stuff. The poor hygienic conditions of the hawkers and street eventually led to a typhoid outbreak in 1934, affecting as many as 11 adults and 13 school children, some of whom died. 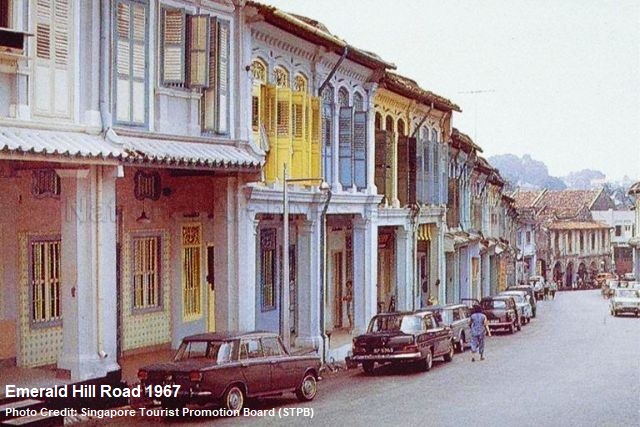 To the local residents, Emerald Hill Road was fondly known as tang leng tiam yia yee hang (“Tanglin Cinema Street” in Teochew). The cinema referred to the Pavilion Theatre (previously known as Palladium Theatre) that operated between 1914 and 1971 near Emerald Road Hill. The location of the cinema today is occupied by Orchard Gateway.

In 1925, the Singapore Chinese Girls’ School moved from Hill Street to the Orchard area, where its new $65,000 campus was located in the parcel of land bounded by Orchard Road, Emerald Hill Road, Cairnhill Road and Hullet Road.

The Singapore Chinese Girls’ School stayed at the Emerald Hill area until 1994 when it moved to Dunearn Road. Its old school campus was then taken over by Chatsworth International School in 1998.

The Second World War impacted Emerald Hill just like any other places in Singapore. After the war, the wealthy Straits Chinese’s exclusive residential enclave had lost its upper class shine; the terrace houses and shophouses had become dilapidated and some were left vacant. Robberies and house break-ins were rampant at Emerald Hill in the fifties.

During the post-war period in the late 1940s, supplies of the basic necessities were extremely tight. In 1946, hundreds had to queue along Emerald Hill Road to get their milk at the Singapore Cold Storage, where the controlled quota was fixed at nine tins of condensed milk per person.

Some of the more prominent former residents of Emerald Hill Road were former Municipal Commissioners Seow Poh Leng and Chin Chye Fong (1892-1965). There were also Heng Pang Kiat, a Justice of Peace, and Chan Sze Jin (1886-1948), a Straits-born Chinese lawyer and member of Executive and Legislative Councils. More than 500 people attended Chan Sze Jin’s funeral when the procession left his Emerald Hill Road house on 27 September 1948.

The Tai Suah Ting cemetery at the Orchard area was exhumed and cleared in the mid-fifties. Orchard, due to its excellent location and close proximity from the city area, gradually became a bustling place, with C.K. Tang Department Store opening in 1958. Supermarkets, malls and hotels began filling up Orchard from the sixties to the eighties. Despite the rapid pace of development, Emerald Hill remained a hidden and quiet sanctuary from the increasing busy main streets.

In 1982, the century-old Orchard Road Market was demolished to make way for the further development of Orchard Road into a shopping belt. Peranakan Corner, at the junction between Emerald Hill Road and Orchard Road, was renamed Peranakan Place and was leased out by the Urban Redevelopment Authority (URA) to a private entity for the promotion of Peranakan culture to both locals and tourists.

In 1985, URA announced the plan of an Emerald Hill Conservation Area to be established at a cost of $2.2 million, inclusive of the restoration cost for some of the terrace houses.

In the late eighties, a section of Emerald Hill Road, the short stretch that led to its junction with Orchard Road, was pedestrianised and closed off to vehicular traffic. Likewise, part of the neighbouring Cuppage Road was also converted into a pedestrian walkway.

The Emerald Hill area was officially gazetted for conservation by URA on 7 July 1989, together with Peranakan Place and Cuppage Terrace. Most of Emerald Hill’s terrace houses were designated for private residential usage, except for a few that were granted for commercial purposes.

While the owners were required to maintain the front façades of the housing units, in order not to compromise the overall aesthetics of the Emerald Hill’s stretch of conserved terrace houses, they were allowed to add extensions at the rear of their units to create more spaces. These extensions, however, were not allowed to be taller than the front façades. 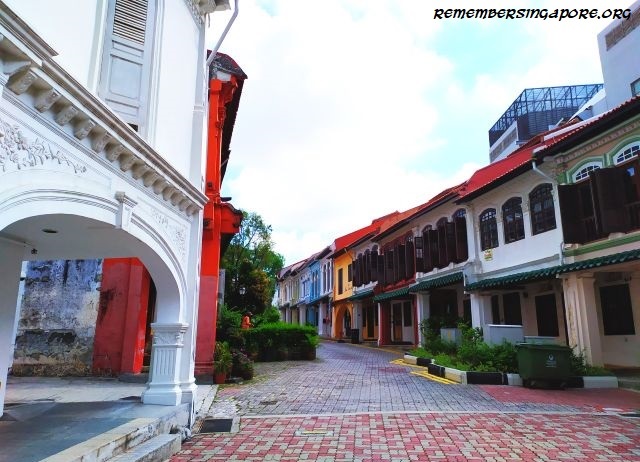 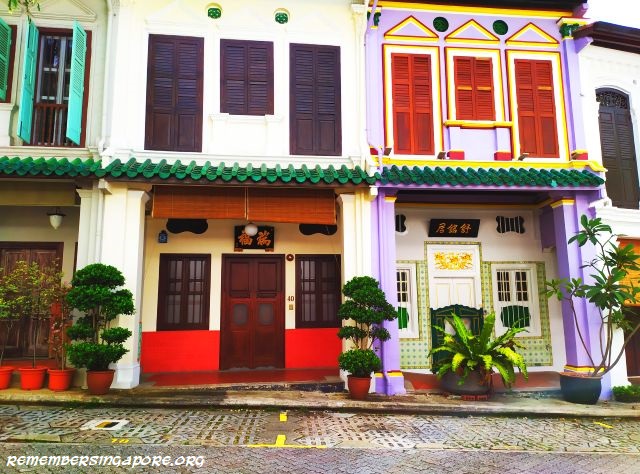 2 Responses to Emerald Hill – A Gem at Orchard