The Mystery of a Deserted Japanese Tomb at Mount Faber

Posted on March 6, 2016 by Remember Singapore

The “rediscovery” of Keppel Hill Reservoir hit the newspapers’ headlines in 2014, but there was another forgotten relic at the southern slope of Mount Faber not known to many people. 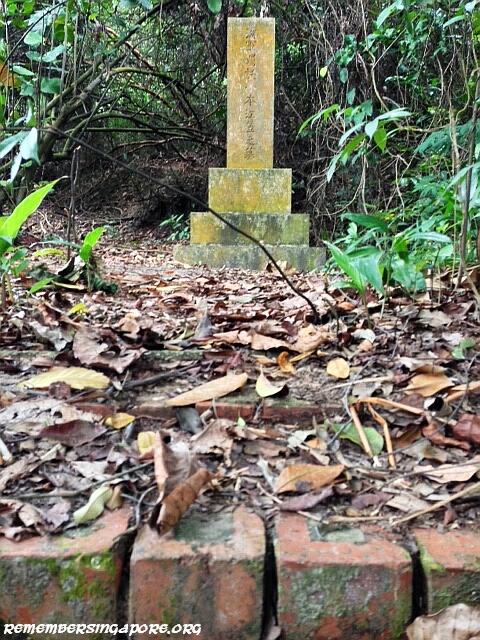 Hidden in the forested slope, at almost the top of the hill, is a tombstone commemorating a Japanese who worked in Singapore during the 1940s. According to the inscriptions on the tombstone, his name was Komoto Ekasa (小本江笠), and he was a civilian naval engineer who had worked for the Mitsubishi Heavy Industries.

Komoto Ekasa was said to be sent to Singapore in March 1942 (17th year of Shōwa period), shortly after the fall of Singapore. He was graduated from the Tokyo Imperial University (present-day University of Tokyo) and had studied ship building. Four months after arriving at Singapore, Komoto Ekasa died, at an age of 47, due to overwork.

Acknowledging his diligence and tireless efforts in working days and nights, the Imperial Japanese Navy commissioned the building of his tomb in December 1943 at the top of Mount Faber, with his tombstone facing southwards to the Keppel Harbour. A platform with steps was also constructed using red bricks supplied by the Alexandra Brickworks.

There are several unknowns to this deserted tombstone at Mount Faber. First, why would the Imperial Japanese Navy commission a tombstone specially for Komoto Ekasa and not for other Japanese civilians who died in Singapore? Second, why was Komoto Ekasa not buried at the Japanese Cemetery at Yio Chu Kang Road?