The Idyllic Days of Changi Creek and Villages

Posted on January 27, 2019 by Remember Singapore

Singapore has many rivers and waterways, one of which is Sungei Changi, also commonly known as Changi Creek (creek refers to a narrow, sheltered waterway), a short river situated at the northeastern part of Singapore.

The Changi area, by the pre-war period, was already an established British military base with airfield, colonial barracks and a wide network of roads served by the Changi Bus Company. Pockets of small villages, existed before the British turned Changi into an airbase, continued to flourish by providing supplies to the troops. Most of them would, however, vanish by the late seventies caused by the redevelopment plans and massive land reclamation projects for the construction of the new Changi Airport.

Changi Village was one of those areas that were affected, but managed to survive after its transformation into a small bustling housing estate and recreational centre in the mid-seventies.

With the impending withdrawal of the British, Australian and New Zealand troops in the early seventies, the Singapore government announced the redevelopment plans of the old Changi Village. This was due to the sizable demand for Changi Village’s goods and services by the Australian battalion living at the nearby quarters. Their departure at the end of 1973 would severely disrupt and impact the shops and businesses at Changi Village. 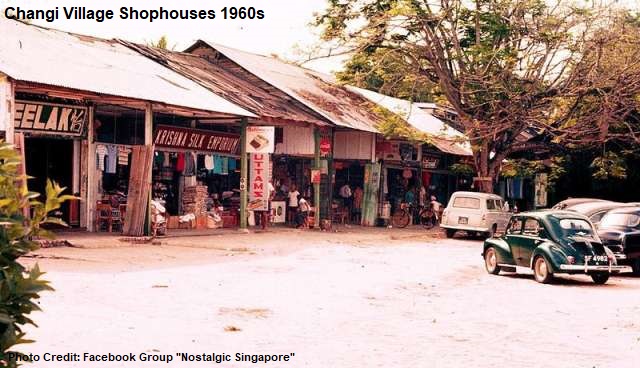 The government also took the opportunity to alter Changi Village’s business model for lesser dependence on foreign demands and more focus in the domestic and recreational sectors. Its rows of wooden shophouses were demolished, and in their place, a small housing estate of more than 350 units of flats, in low-rise blocks, were built.

Completed in 1975 with flats, shops, eateries, a bus terminal, hawker centre and market, the newly-looking Changi Village not only welcomed back many of its original residents and shopkeepers who were initially affected by the redevelopment, but also attracted other Singaporeans to visit it as a stopover point to Changi Beach or Pulau Ubin. 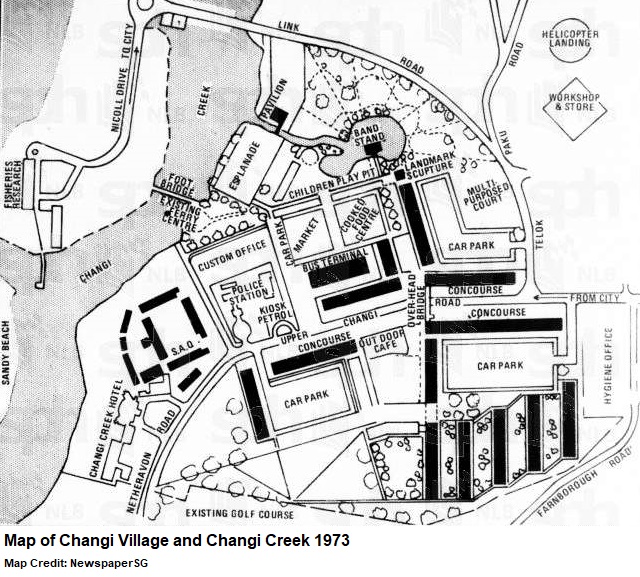 Changi Creek was also transformed. Its banks were turned into a small esplanade with a landscaped park and children’s playground. The narrow waterway, previously filled with dozens of squatter huts, litters and dead animal carcasses, was cleaned up and, at the end of it, a reservoir was built.

The Changi Creek Reservoir, at 2.8m deep and a storage capacity of 80,000 cubic metres, acted as a water collection system for the new Changi Airport premises built in the early eighties. The reservoir’s pumping system, pipping and hydrant lines were completed in 1981 by the Public Works Department (PWD), enabling the reservoir to support the airport’s fire-fighting capabilities. 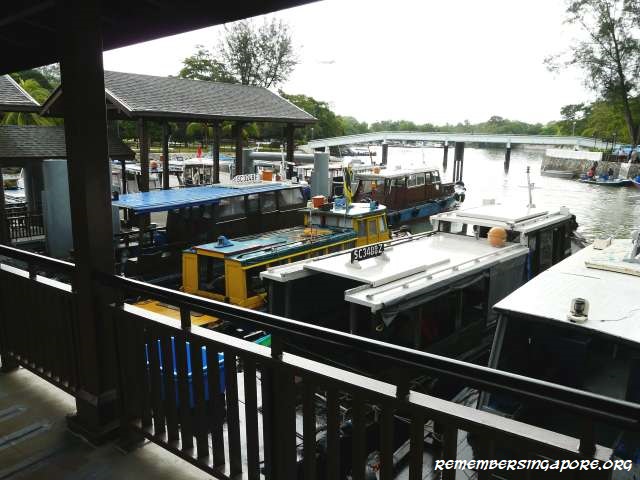 Leading to the opposite Changi Beach, the iconic foot bridge at Changi Creek has been around for more than half a century. It has been marked in the local maps dated back to the mid-fifties. The boarding and alighting point of boats, the predecessor of the present-day Changi Point Ferry Terminal, also existed back then to provide ferry services to Pulau Tekong, Palau Ubin and Johor.

In 1979, an unexpected visitor – a Vietnamese trawler with 32 refugees – ran aground at Changi Creek due to receding tides. The refugees, made up of Vietnamese men, women and children, were brought by the police to a nearby sailing club while the boat was being repaired for its damages, after which the refugees continued their journey to an undisclosed destination.

Beside the foot bridge is the docking point for the unloading of live seafood by the Singapore and Malaysia fish farmers. Numerous boats, filled with fish, prawns and crabs, arrive daily at the dock for their goods to be hauled and transported to the local seafood restaurants.

In 2016, however, the authority considered the permanent closure of the Changi Creek dock due to safety and security concerns. There were also reports of illegal smuggling of cigarettes, narcotics and pets. Plans of the closure of the dock were put on hold after the appeals of the fish farmers and ferry operators.

There are a few old roads at the Changi vicinity. Nicoll Drive, between Tanah Merah Road and Changi Village, was built in the fifties as a coast road with a splendid picturesque view of the Changi beach. The road, at its beginning, was a quiet drive without street lamps and a few houses along its 6.5km-long route, a large difference from what it looks like today. After its completion, Nicoll Drive was named in 1955 after Sir John Nicoll (1899-1981), the Governor of Singapore between 1952 and 1955. The Nicoll Highway in the city area was also named after him.

Telok Paku Road, on the other hand, was better remembered for the government bungalows that functioned as holiday resorts by the sea until their demolition in the late seventies. The quaint-looking pre-war bungalows, some of which were named Annexe, Brighton, Clifton and Hove, were made available for rental to the public since 1962.

In 1948, an airstrip extension at the Changi airfield led to the British’s acquisition of the nearby lands As a result, two affected villages  – Kampong Beting Kusa and Kampong Tenah Merah Besar – were resettled with a $30,000 compensation. The villagers were moved to Kampong Ayer Gemuroh, another coastal village located near the southeastern coast of Changi. Some Kampong Beting Kusa fishermen continued their trades by moving to the easternmost beach, setting up kelongs and coastal houses near to the Telok Paku government bungalows. 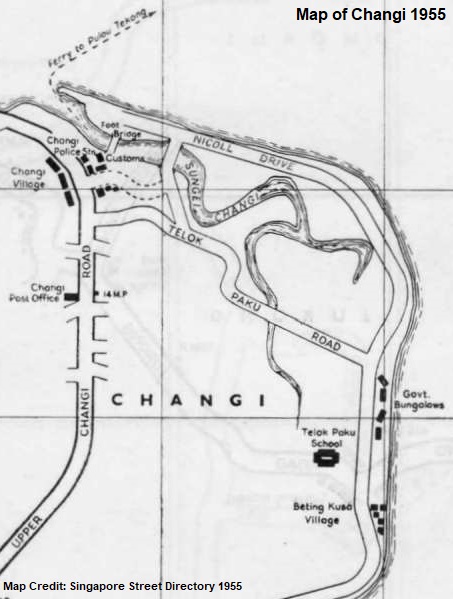 While most of Kampong Beting Kusa and Kampong Tanah  Merah Besar villagers relocated their homes closer to the Changi coast, a number of affected kampong residents chose to move inland by resettling at Kampong Tengah and Kampong Darat.

Most of the kampongs had vanished in the mid- and late seventies when the construction of the new airport took place. Changi and Tanah Merah’s villages and the Telok Paku government bungalows were not the only ones affected; the redevelopment works led to the closure of Telok Paku School (1950-1975) and Ayer Gemuroh Malay School, acquisition of private residences, such as David Marshall’s bungalow, and the relocation of several elderly and children’s homes, including the Cheshire Home (established in 1957 by Captain Leonard Cheshire of the Royal Air Force), Chen Su Lan Methodist Children’s Home, Crippled Children’s Home (established in 1953 by Red Cross Society) and the Children’s Society Convalescent Home (established in 1956).

2 Responses to The Idyllic Days of Changi Creek and Villages