The flats located at Silat Avenue were mostly built between 1949 and 1952 by the Singapore Improvement Trust (SIT), the predecessor of the Housing Development Board (HDB), making them the second oldest surviving public housing estate in Singapore after the Tiong Bahru pre-war flats. 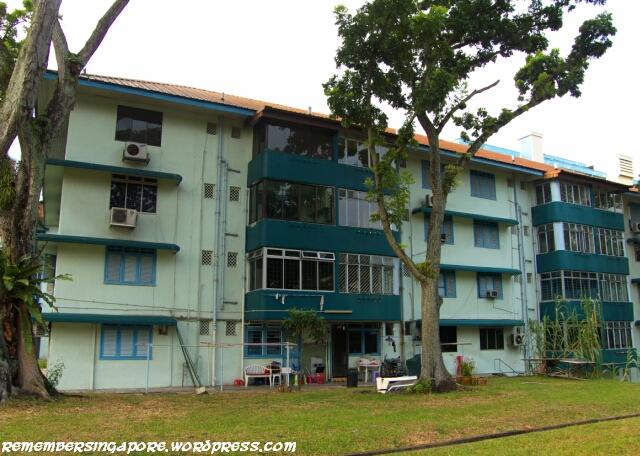 The neighbourhood used to be known as Kampong Silat, with its name probably derived from the Malay martial arts. A Silat Community Centre once stood along Silat Avenue, only to be replaced by a point-block flat and a nursing home after the late nineties.

The squarish Art Deco-styled flats, mostly three- or four-storied tall, have wooden window panes, large balconies and a huge red-tiled roof with chimney-like structures. Such designs were also used in the construction of SIT flats elsewhere in Singapore, such as Princess Elizabeth Park at Upper Bukit Timah.

There were originally 15 flats built, with their block numbers ranging between 17 and 31. Two of the front blocks that stood facing Kampong Bahru Road, numbered 20 and 21, were demolished in the late nineties.

An interesting and unique feature about these SIT flats is that, despite standing close to each others, the blocks’ addresses are categorized by the three roads that run around them, namely Silat Avenue, Silat Walk and Kampong Bahru.

In 2007, all the 13 SIT flats were announced to be part of the Selective En Bloc Redevelopment Scheme (SERS) program. By the first half of 2012, most of the flats were vacated.

On the opposite side of Kampong Bahru Road stand two high-rise HDB flats (Block 1 and 2) that once housed the personnel of the Royal Malaysian Customs and Malayan Railways Limited, or Keretapi Tanah Melayu (KTM).

Built in the eighties by HDB, the two flats are called the Kemuning Residential Block and Melati Residential Block. The blocks are also commonly known as the Spooner Road flats, where Spooner Road is the minor road that leads to the small estate and was named after Charles Edwin Spooner (1853-1909), the State Engineer of the Public Works Department during the British colonial era. The road to the former property of KTM was appropriately named as Spooner was also the head of the Federated Malay States Railways in 1901.

In 2011, the flats, as part of the KTM railway premises, were handed over to the Singapore Land Authority (SLA). The former KTM workers’ quarters were then converted into rental flats with 10 years’ leases.