“Changi Village is quickly being transformed into a resort town. The rubble of the old flattened huts and shops has long been cleared and now the first blocks of uncompleted new flats look across towards the sea.

I had not been into Changi Village for well over three years, and the changes that have taken place tend to boggle the mind – am I or am I not in Changi Village was the first question that leapt into my mind.

Driving along the last stretch of Telok Paku Road, the only familiar sight I noted was the murky, clay-coloured waters of Changi Creek.

On negotiating the bend into Upper Changi Road, my eyes were immediately riverted to a block of flats. It took a while to register for I was still expecting to see the row of shops that used to sell just about everything from golf club to a silk kimono.

But the thing that was most unnerving was the silence. I never remembered or associated Changi Village with this stillness. The two-way street was almost completed deserted except for a few parked cars, and a teenager making his way across the road.

Where were all the buses that used to line the road occupying a good slice of it, and creating such a racket each time the engines were revved before they moved off? Or the man who used to yell the number of the bus that was about to start out?

I looked around and found the bus terminal nearly tucked behind the new flats occupying the area where the market used to be. My next silent question was: And where have they moved the market to?

It was like playing a game remembering where things were, and trying to locate them again. Incidentally the “sarabat” stall (a favourite haunt of friends during our camping days) hasn’t moved too far – just across the road directly opposite the old spot. At least I still know where to look for a cup of coffee at 3am in the morning should I be up Changi way again!

It was after I got over the initial shock of the changes taking place, that I began to note a few remaining “landmarks” that haven’t been housed somewhere else –  the shops on one side of the street still stand with goods displayed, but that’s about all.

The shopkeepers don’t seem over anxious to persuade customers to buy. I walked along the row and tried to get a few of them to talk, but they weren’t too eager, not even in sales talk.

They certainly have lost their sales touch. I remember Changi Village shopkeepers having a reputation for the gift of the gab, and coming up with cute gimmicky posters outside their shops. They were reputed to quote the best prices that made people go to Changi to purchase certain items. But now there’s a lethargy hanging over the shops and it has to be experienced to be believed. 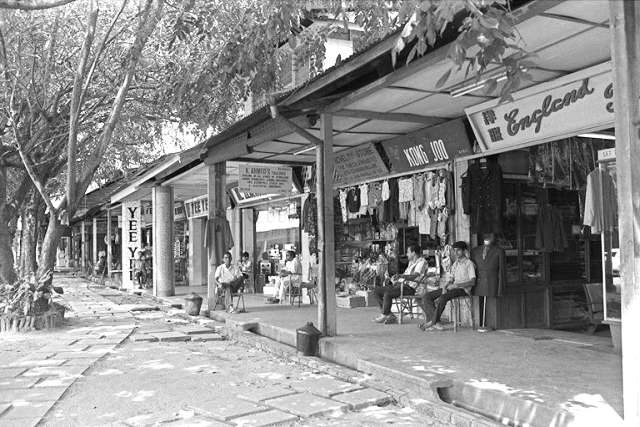 Still present, too, were the police station and the Customs office – and they’ll probably be the only distinguishing sights at Changi in a year or so.

My photographer and I then took the short walk along the lane that leads to the kampung, or rather, the ex-kampung. Though there are no longer any houses, things on a first glance haven’t changed so very much, and certainly there’s more life here, at least as much as the sense of laziness caused by the strong afternoon sun would permit!

Huge trees provided shelter for a few old men and those waiting for the ferry service out to Tekong.

A semblance of kampung life still exists here, for instead of houses there are a cluster of huts that serve as food and drink stalls, and are run by the villagers who used to live here. 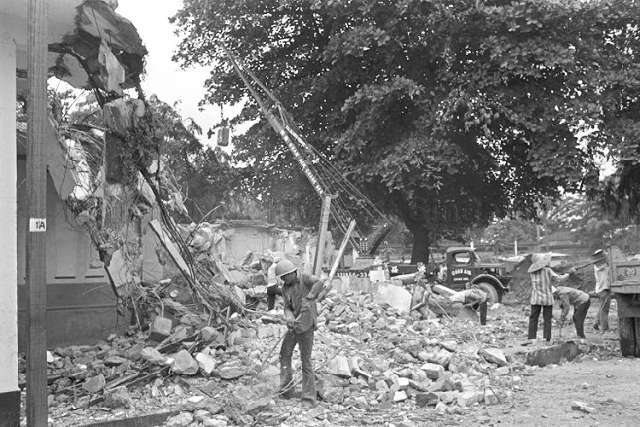 The villagers have lived and sold their goods in Changi Village for so long that some just can’t seem to uproot themselves and one of them is Jenah binte Haji Hasnan, a 43-year-old woman who now manages a drink stall that also sells sweets and cigarettes.

“I have lived in Changi for over 30 years, and used to sell crockery and plastic goods in the market place – I don’t want to move. When the new flats are completed I will have a shop in them and return to selling the old wares,” she said. But until then she is quite content to continue her makeshift stall.

“It’s the same with the others, they are all part of the village,” she said and pointed to her fellow “sellers”. Some have moved to the creek to stalls set up by the government. “We are allowed to sell there with no fee except for a license, but I prefer it here,” she added. 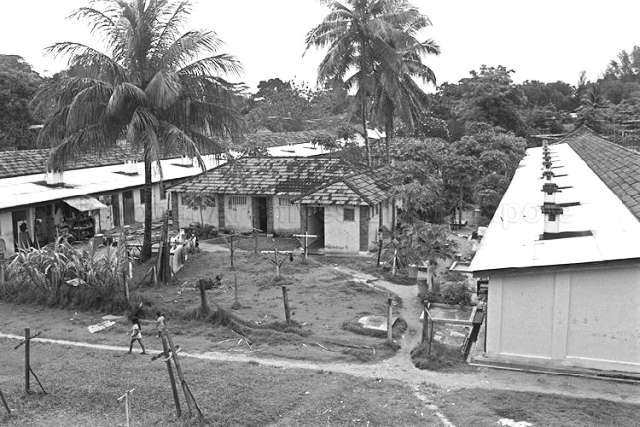 Many of them will move back into the flats once they’ve been completed.

On the new scheme to make Changi a recreation spot, the present food sellers are at least all for the idea. Said one of them: “With the area cleaned up, there should be more people coming to the beach which will be good for us. Much as I love the old Changi and regret the tearing down of the kampung, it’ll be much better when all this is completed.””

Editor’s Note: An interesting article dated back in February 1975 vividly described the people and scenery that were affected by the development of Changi Village.