Posted on November 30, 2011 by Remember Singapore

With the completion of the Integrated Resorts (IRs) and its casinos in 2010, some said that Singapore had truly become a sin city. While they might be right, the fact is gambling has never been a stranger on this island.

This article, however, has no intention in justifying gambling and betting.

In the 19th century, the early Chinese immigrants in Malaya and Singapore, many working as coolies, were plagued by the addiction of gambling and opium. Much of their hard-earned money was spent on these vices, resulting in a number of them unable to return to China and die penniless in Nanyang. Under his charge, Sir Stamford Raffles (1781-1826) outlawed cock-fighting, popular among the Malays, and the Chinese gambling dens.

When Raffles left Singapore for Bencoolen in 1820, he left the colony under the care of Scottish William Farquhar (1774-1839). Farquhar viewed gambling as a source of income for the colonial government, and subsequently issued licenses to the big Chinese operators of gambling dens. 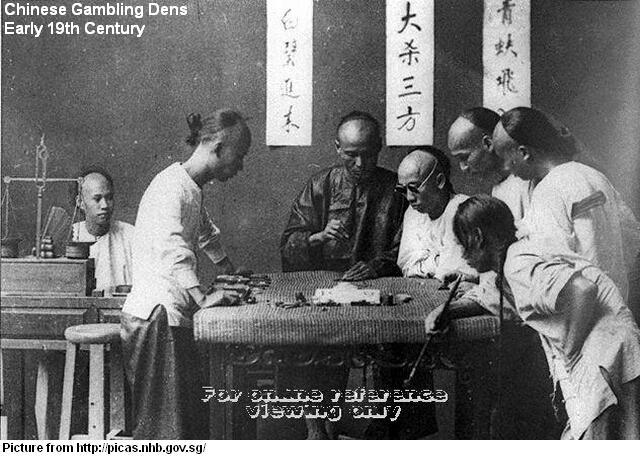 Throughout the 19th century, the policy of legalising gambling was changed repeatedly. Despite the laws, gambling dens continued to exist and flourish until the mid of the 20th century. The China Street in the present-day Central Business District (CBD) was once known as giao keng kau 赌间口, due to the numerous gambling dens operating there in the old days. The notorious street was also dominated by powerful secret societies and moneylenders.

Scottish businessman Henry Macleod Read (1819–1907) founded the Singapore Sporting Club in 1842 and had Singapore’s first ever horse racing held at Farrer Park a year later, with the top prize money offered at $150.

In 1924, the club changed its name to Singapore Turf Club and its premise was shifted to a larger ground at Bukit Timah in 1933 (and to Kranji racecourse in 1999). Ever since 1960 when horse racing was officially opened to the public, the sport-betting was so overwhelming that the two grandstands with capacity of 50,000 were easily filled up during the weekends. 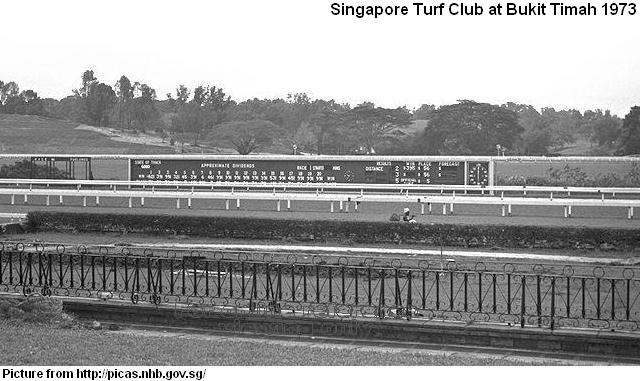 During the Japanese Occupation, all sorts of gambling were unofficially allowed. The Japanese even introduced a lottery called Konan Saiken, Singapore’s first ever state lottery, in 1942 to raise revenue for their administration. With the top prize of $50,000, each ticket cost $1 and all civil employees were required to buy.

After the war, the British returned as Singapore struggled to recover. There were more interactions between the white rulers and the people, although the social divide was still very much in place.

Roulette and other card games had always been the favourite pastimes of the upper class in the colonial Singapore. The picture shows a mixture of British and local patrons playing at a roulette table in the Dale Carnegie Club (a club formed by a group of Singaporeans who graduated from the speech-training course of the same namesake) in 1956.

Independence and The Singapore Pools

The society of Singapore, after independence, was overrun by the underworld trials, which had a hand in almost all illegal activities such as gambling, drugs and prostitution. In order to tackle the issue of illegal gambling, the Singapore Pools Private Limited was set up on 23rd May 1968 as the sole legal operator of lottery. Its temporary office was opened at Mountbatten Road.

Two weeks later, Singapore Pools launched the lottery of Toto as its first game, with the help of Bulgarian Toto expert Papadopov Nikolai. The public response was so overwhelming that the limited Toto coupons were snapped up within the first few hours of sale at the Singapore Post Office. 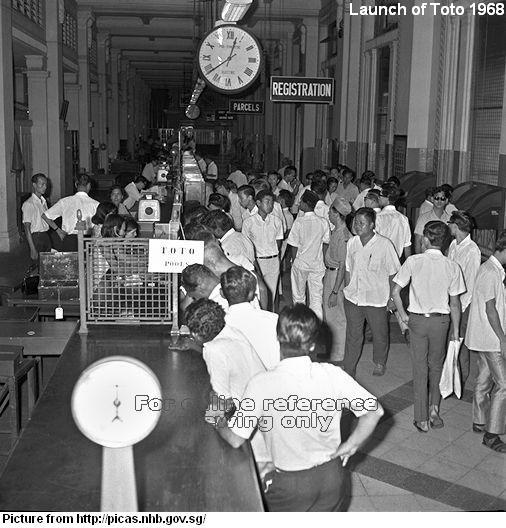 One year later in 1969, the Singapore Pools continued its successful start with the introduction of The Singapore Sweep. The first prize was set at $400,000, an astronomical figure during that era, and tickets costing $1 each were sold at small booths in many parts of the island. The prize would be raised to $1 million by 1983. 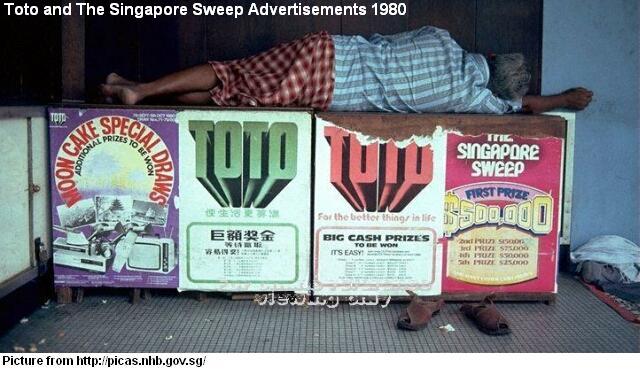 On 26th May 1986, Singapore Pools launched the computerised 4-digit number game simply known as 4D (摇珠万字票), arguably the most popular betting game in Singapore. It is reported that more than 50% of Singaporeans has participated in the purchase of 4D in one way or another. The 4D draw days were initially held only on the weekends, but were extended to Wednesday after 2000.

Said to be originated from Kedah in 1951, 4D has been extremely popular in both Singapore and Malaysia. It is commonly known as beh bio (马票, literally means “horse ticket”), although it is actually a machine that randomly draw out four balls, each representing a single digit. However, in the sixties, 4D was drawn in the Singapore Turf Club. The game was influenced by Hong Kong horse racing, where each set of numbers was randomly picked and then assigned to a horse. The first, second and third prizes were determined by the winning horses in the race. Starter prizes and consolation prizes are commonly known as ji wei (入围, qualification) and beh sai (马屎, literally means horse shit) respectively.

Many locals like to get inspirations of numbers from newspapers, deities, or even car accidents and Luohan fish. Sometimes, they also roll up red slips of papers, each with a digit (zero to nine) written underneath, in a small milk can and shake out four digits to form a set of lucky number. Most folks lose in the long run, but that does not stop their dreams of striking the big prizes. In 2005, a middle-aged man struck $14 million, the biggest win in the history of Singapore 4D.

Once in a while, one can also read from newspapers that a certain ang zi (红字) comes up as first prize and causes some illegal underground bookies to bust. On the contrary, unlucky numbers are called orh zi (黑字). Someone has researched that as many as 20 numbers have never “opened” in the history of 4D.

Football Betting and Others

Other than significant contributions to the building of the National Stadium and The Esplanade, Singapore Pools also showed its support to the development of local football when S-League started in 1996.

It launched SCORE in 1999, and later STRIKE! in 2002, as a channel of legalised betting in local and international footballs. The move also aimed to stamp out illegal football betting, which was starting to become very popular among Singaporeans since the late nineties.

By the 2000s, Singapore Pools had expanded in many sectors, including a scratch-and-win game called Scratchit!, system roll and iBet in 4D, telephone betting through PoolzConnect and betting in Formula One racing. Today, there are more than 280 Singapore Pools outlets in almost every corners of Singapore.

For decades, illegal gambling dens and stalls in Singapore have never been totally eradicated. The small stalls have high mobility, been able to be set up and packed up in double quick time. It is not surprising that they can still be found in the back alleys of Geylang today.

Before the opening of IRs, jackpots and fruit machines have already found their way into Singapore. Social clubs such as NTUC (National Trades Union Congress) Club, Automobile Association of Singapore (AAS) and SAFRA (Singapore Armed Forces Reservist Association) have brought the game machines in since the nineties.

Although they are restricted to members above the age of 18, the public raises their concerns when some of the clubs located in the residential neighbourhoods are found operating these machines. In 2007, jackpot machines around Singapore raked in as much as $700 million worth of revenue.

Tens of thousands of Singaporeans travel some 400km to Genting Highlands, Malaysia every year. In the eighties, before the North-South Highway was fully completed, many determined Singaporeans would drive 10 hours in poorly lit single-lane roads flanked by vast plantations in Malaysia to get to their destinations.

Casino ships were once popular with the local gamblers too. Rebates of betting chips and free buffets have lured many to visit Leisure World at the international waters off Batam. In the past, there were whispers that many local housewives visited the casino ships daily; they would board the ships in the mornings and return by the evenings, to avoid suspicions from their husbands. A lot of them lost their savings by tens of thousands of dollars.

Types of Popular Games in Singapore

Gambling in public was banned in Singapore until the sixties. One local lottery chap ji kee (十二支), though, was extremely popular then, especially among the housewives. They would use some of their monthly allowances or savings to bet, hoping to strike the first prize.

The game was simple, as one just needed to choose two numbers from one to twelve, and place them in either horizontal or vertical arrangement. In the vertical arrangement, the sequel of the two numbers must be correct in order to win the payout, often to more than 10 times the size of each bet. Codes were used on the betting slips, usually by circles and lines to indicate the stake amounts.

Runners would then collect the slips usually at the kopitiams, and bring them to a centralised location where the numbers would be drawn and announced.

La bi is a corrupted pronunciation of rummy, a card game similar to si sek pai. It uses normal playing cards which involve drawing of cards, making melds and discarding the unwanted cards on hand. While si sek pai is mostly played by housewives, la bi seems to be a favourite game of local middle-aged men in the eighties and nineties.

Mahjong is one of the favourite pastimes here. A few rounds of mahjong at home are not considered illegal in the eyes of Singapore law, unless there are syndicates involved with the intention of profiting.

Singapore mahjong is unique in its own way, with its set of rules and regulation (eg. animals are involved as tai 台, game ends at last 15 tiles, stakes are increased geometrically, etc). Below is a brief comparison with the main characteristics of other variants of mahjong in the world:

Overall, the style of Singapore mahjong most resembles that of Hong Kong mahjong. Even the taboos of the superstitious gamblers are similar, such as tapping of shoulders are prohibited, school bags and combs are considered unlucky items (they sound like losing in Mandarin), discarding of west wind at the start of a game is also considered unlucky as west is xi (西) in Chinese, hence referring to xi tian (西天).

However unlike Hong Kong, mahjong is also seldom played in weddings and funerals. The Singapore government also does not allow the operation of mahjong parlours.

Other card games such as Blackjack, Cho Dai-D, Pusoy (Chinese Poker) and Texas Poker are also commonly played in Singapore. Mahjong and blackjack are especially popular among friends and relatives during Chinese New Years.

15 Responses to 4D, Mahjong and Chap Ji Kee.. History of Gambling in Singapore