Posted on September 17, 2013 by Remember Singapore

The phrase “kampong spirit” has been mentioned frequently in recent years, especially in the media or used by the community leaders in their speech. Another phrase “gotong royong“, a term widely used in the sixties and seventies but relatively unknown to the younger generations, is also occasionally making its rounds, most notably by current Prime Minister Lee Hsien Loong at a book launch at Kampong Radin Mas early this month.

So what is gotong royong? Originated from Indonesia, the phrase is translated into English as “cooperation in a community” or “communal helping of one another”, but the closet interpretation is perhaps “mutual aid”. Gotong royong involves the spirit of volunteerism, and working together for the benefits of the residents living in the same community. It promoted a selfless approach that proved beneficial to the building up of cultural identity among the people.

Community Spirit in Other Countries

In other parts of the world, the promotion of community spirit has been a social policy for many governments. It takes on many names such as gadugi (Native American), talkoot (Finnish), bayanihan (Filipino), harambee (Kenyan), imece (Turkish) and meitheal (Irish). For centuries, the dream of building an idealistic society, otherwise known as the utopia, was heavily sought after, but often resulted in catastrophic failure when the method used was too extreme. China’s state policy (in 1958) of a peoples’ commune, where everything from kitchens and tables to farms and food were shared and distributed among the people, was one of the examples.

In Southeast Asia, nationalism was on the rise after the Second World War. Indonesia’s first president Sukarno actively pursued the idea of gotong royong as a way of Indonesian life in a newly-independent nation. In Malaysia, gotong royong was embraced as part of a collaborative practice in the Malay traditions and customs, and was even determined as one of the important socio-economic values in its National Cultural Policy in 1973.

Singapore of the sixties and seventies provided the ideal environment for the growth of the spirit of gotong royong. Fresh from independence, Singapore was struggling with its economy and national identity. 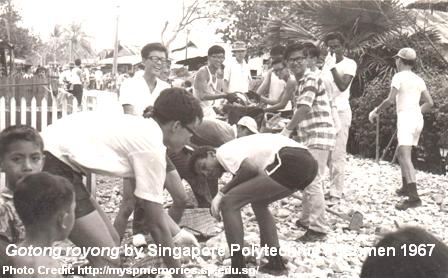 The horrors of bus strikes and school riots appeared vivid in the people’s minds, and the racial tension was still high. The rural areas, though, were relatively more peaceful and harmonious. Residents living in multi-racial villages continued to look out for each others in the turbulent years.

The kampong spirit was more than just little aspects of daily life such as borrowing a few pinch of salt and a couple of eggs or sharing a dish. The neighbours were able to share and help out one another based on trust and friendship, forging bonds and strong ties within the community.

Gotong royong, on the other hand, was promoted through the voluntary works by the national servicemen, students and committee members, that included clearing paths, paving roads, filling up potholes and repairing houses that were damaged by thunderstorms or floods. The filth and stench might put off, but majority of the volunteers would be touched by the overwhelming appreciation and gratitude shown by the kampong residents.

As Singapore began to ramp up its public housings and new townships in the late seventies, many residents living in the kampongs were resettled at the new HDB flats. The government tried to encourage the practice of neighbourhood watch, as the flat owners now lived closely to one another, shared by the long common corridors. It could be considered an alternate form of community spirit, but even so, the spirit was gradually diluting as time passed.

Dubbed as one of the four Asian tigers (or little dragons), Singapore was enjoying its high growth and economic success in the eighties and nineties. The standard living of an average Singapore family improved, and a younger generation of competitive Singaporeans began to pursue the so-called materialistic 5C dream (Cash, Car, Credit card, Condominium and Country club membership). Long hours of work resulted in lesser interactions between neighbours; every family became contended to live in their cozy worlds behind closed doors.

As Singapore entered into the new millennium, the society geared up its competitive nature and focused more on results and profits. This did create a more efficient system, but it also widened the gaps between the people. More became self-centred and individualistic. The massive influx of foreigners further divided the society. For the first time since independence, Singapore’s own unique culture and identity, forged and strengthened through decades of nation building, faced the risks of dilution.

We will then have to ask ourselves: can the kampong spirit and gotong royong spirit be truly revived again?