Adam Park and its WW2 Past

Adam Park was developed as early as the 1920s. Between 1925 and 1929, colonial houses were built at Adam Park by the municipal council as housing quarters for the senior officers in the British government. Three types of residences – type A, B and C – were built to accommodate the officers of different seniority. For the benefits of the residents, garages, outhouses and even tennis courts were also approved for construction by the municipality. A substation was erected in 1930 to provide electricity for the Adam Park area.

Adam Park, and the main Adam Road, were named after Frank Adam (c.1855-1925), the former managing director of The Straits Trading Company. Established in 1887, the company specialised in tin mining and had developed the Pulau Brani Tin Smelting Works. Frank Adam, a Scot, dealt with sugar business in Java before he arrived at Singapore in 1901. In the next 15 years, he worked his way up at Straits Trading Company, and retired in 1918. Frank Adam returned in 1923 as the chairman of the company, but retired again in the same year, and went back to Scotland for good. 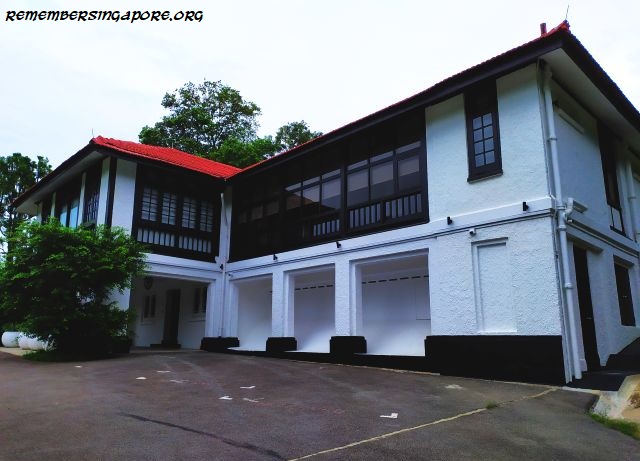 In the late 1930s, the municipal government earmarked a $1 million budget to upgrade the road networks in Singapore. From the city area, the “inner” and “outer” rings of roads were connected to provide better accessibility to the suburban areas. Adam Road and Adam Park were part of the “outer” ring network, which were linked to Farrer Road, Lornie Road and Braddell Road.

The municipality also acquired four houses at Adam Park for $90,000 in early 1940, but war broke out two years later. The road-facing house, 7 Adam Park, was converted and functioned as the field headquarters of the 1st Battalion of the Cambridgeshire Regiment. The battalion was stationed at Adam Park in February 1942, ordered to hold the defensive line against the invading Japanese army.

It was near Adam Park, at the intersection of Adam Road, Sime Road and Lornie Road, that saw one of the fiercest battles in Singapore during the Second World War. The intensive fighting was nicknamed “Hellfire Corner”, referenced after a famous battleground in First World War. It resulted in heavy casualties and several Adam Park houses damaged in the bombings. At 4pm on 15 February 1942, the Cambridgeshire Regiment battalion received a cease-fire order. The British had surrendered to the Japanese that evening.

Following the Fall of Singapore, Adam Park was used to house the prisoners-of-war (POWs). Between March 1942 and January 1943, some 1,000 British and 2,000 Australian POWs were locked up at the Adam Park POW Camp. Despite the hostile conditions, the POWs managed to have a small chapel, canteen and hospital at Adam Park. Many of them, however, were forced labourers, paid 10c per day, at the MacRitchie Reservoir for the construction of the Syonan Jinja shrine.

In late 1942, about 900 of the British and Australian POWs were sent to construct the Siam-Burma Railway, also known as the Death Railway. Up to 250,000 Allied Forces’ POWs, captured in other regions, were shipped to construct the railway. An estimated 40 to 55% of the POWs did not survive the horrific working conditions filled with torture, hunger and malaria.

After the war, the municipal commissioners approved a $50,000 budget in 1948 for the repair of the damaged houses at Adam Park and other areas. But the area remained short of electrical supply and lighting in the early fifties.

In the late fifties, some of the vacant bungalows at Adam Park, Tanglin Road, Swiss Cottage Estate and Woodleigh Park were made available for rent to the senior officers of the Singapore City Council. Others were leased out to the highest bidders via public tenders. Over the years, various groups had also occupied the Adam Park houses, such as the Singapore Cage Bird Society, British High Commission and Asian Women’s Welfare Association. By the early seventies, the monthly rental fee of an Adam Park bungalow cost as much as $3,500.

Adam Park remained secluded over the decades but things began to change in its surroundings after the sixties. In the early seventies, the construction of the Pan-Island Expressway (PIE) and Adam Flyover cut it off from the nearby Adam Drive and Sime Road. A neighbouring kampong was cleared and demolished during the massive project, in which the Public Works Department (PWD) used explosives to blast open the rocks at the junction of Adam Road and Adam Drive. 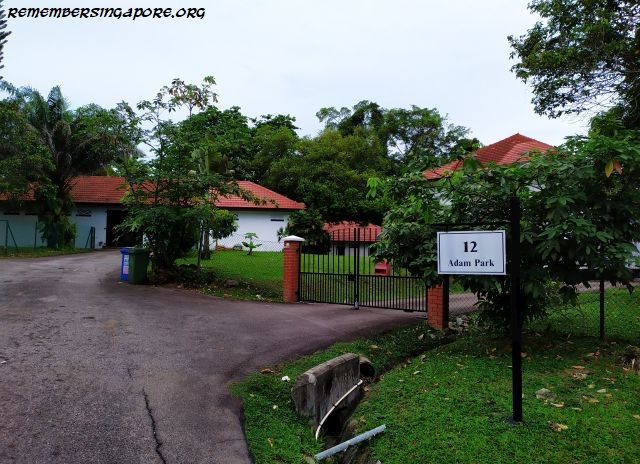 In 1987, 7 Adam Park was refurbished and opened as the Guild House of the National University of Singapore Society (NUSS). It was NUSS’ fourth Guild House, after the ones at Dalvey Estate, Evans Road and Kent Ridge. It lasted until 2014, when the Adam Park Guild House was closed after NUSS opened their new Guild House at Suntec City.

Battlefield archaeologist Jon Cooper started the Adam Park Project in 2009, sponsored and contributed by many organisations such as the National Heritage Board (NHB), National University of Singapore (NUS), National Library of Singapore, National Museum of Singapore and the Singapore Heritage Society. Through his years of researches and site surveys, more than 1,000 valuable artifacts of the Second World War have been unearthed and discovered. These included military badges, coins, Christian murals and even a counting-down calendar scribbled on a wall by a former POW.

1 Response to Adam Park and its WW2 Past