Bird Singing, a Favourite Pastime of the Past

Posted on September 29, 2016 by Remember Singapore

Locally, the favourite birds kept as songsters are the merbok (zebra dove), white-rumped shama, merbak jambul (red-whiskered bulbul), mata puteh (oriental white eye) and China thrush (Chinese hwamei). The merbok, in particular, is well known for their pleasant and soft cooing calls. Previously more commonly known as perkututs, the bird is dark brown in colour and resembles a small pigeon, and was once commonly found at the sandy parts of Singapore’s countryside. The white-rumped shama, on the other hand, was featured on the Singapore fifty dollar note of the bird series.

In the sixties, there were many bird shops at Rochore Road. Birds like merobok would cost a few dollars each, but the prized ones could easily fetch up to $3,000. Several local bird singing interest groups were formed, with the Kelab Burong Singapore (Singapore Bird Club) being one of the most prominent ones. It regularly organised annual bird singing competitions, especially in the late sixties and early seventies, at venues such as Jalan Besar Stadium, Gay World Stadium and the South Buona Vista Training Institute.

When the Jurong Bird Park opened in 1971, it also held bird singing contests to boost its visitorship. In its first ever contest, held at the tram terminal of the park, a total of 287 participants competed, making the contest a considerable success.

When the government ramped up new public housings at Ang Mo Kio, Bedok, Tampines and Clementi in the seventies and eighties, the hobby and contests in bird singing started to move into the heartlands.

Many bird singing corners were set up at the flats’ void decks, open fields or the parks within the housing estates, where there were customised poles and railings used for hanging rows of bird cages currently. It proved to be popular among the residents, who, beside showcasing their chirping birds, could also engaged in chit chatting, exchanging of views and tips, making friends, or simply engrossing in their prized feathered pets’ melodies in the common space. 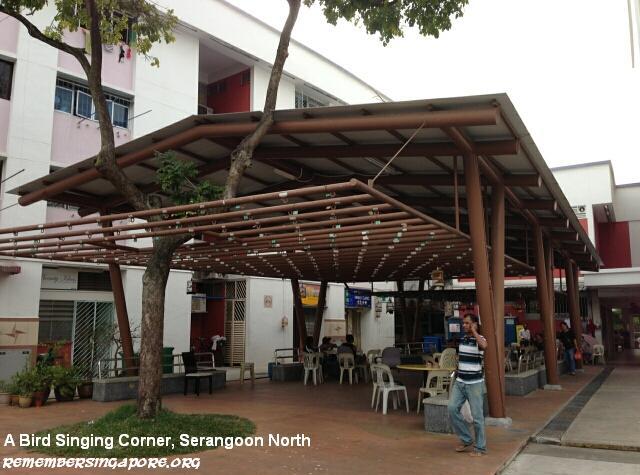 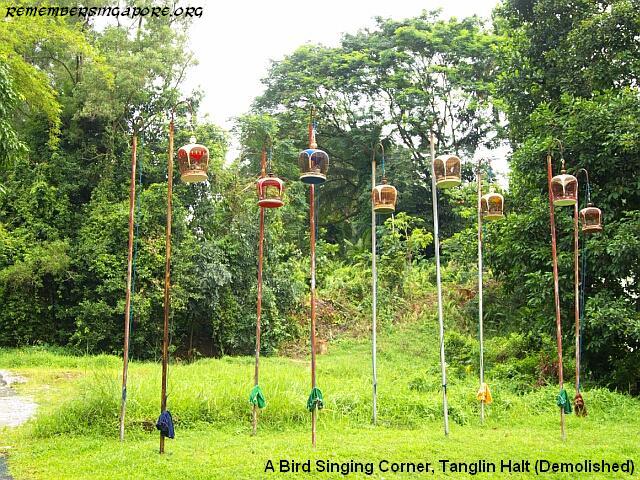 Community centres, People’s Association and the Singapore Armed Forces (SAF) Reservists’ Association were the most regular organisers of local bird singing contests. In the eighties, such competitions easily saw hundreds of bird lovers taking part, and Members of Parliament (MPs) were often invited as guests of honour. Monetary prizes and trophies were awarded for the most outstanding birds.

Judges were invited to give marks to each bird’s performance, and sometimes it took hours for them to assess hundreds of birds. To pick a champion was no easy task. There were several criteria to determine a winner; its general appearance, the number of scales on its feet, the health of its plumage, and – the most important factor of all – its singing ability, which included the length of each call, the tonal quality, the volume and the purity in the sound of the calls. 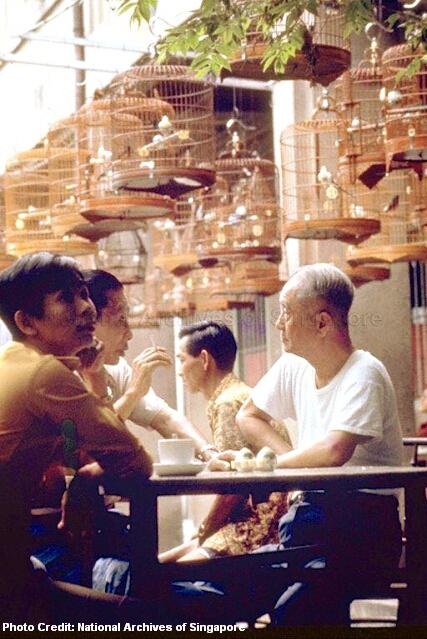 In 1983 and 1984, the National Bird Singing competition, organised by Jurong Bird Park, Singapore Tourist Promotion Board (STPB) and the People’s Association, were held at the open space next to the Mandarin Hotel and Ngee Ann Building respectively. The contest attracted more than 850 entries, some of which even came from neighbouring countries such as Indonesia and Thailand. Computers were used for the first time to aid the judges in their assessment. Thousands visited the events, which resembled a carnival that consisted of talks, sale of bird cages and bird seed, and even a bird show of colourful parrots from the Jurong Bird Park.

Perhaps the most famous bird singing corner in Singapore was the one at Tiong Bahru Block 53. The bird singing corner, dubbed as “Singapore’s most famous Sunday bird singing concert“, was located beside a kopitiam named Wah Heng, a favourite meeting place for bird enthusiasts between the early seventies till its closure in the nineties. The popular spot was said to have started off in the mid-fifties as a gathering venue for a small group of bird lovers. Over the years, the group grew bigger as others joined in. 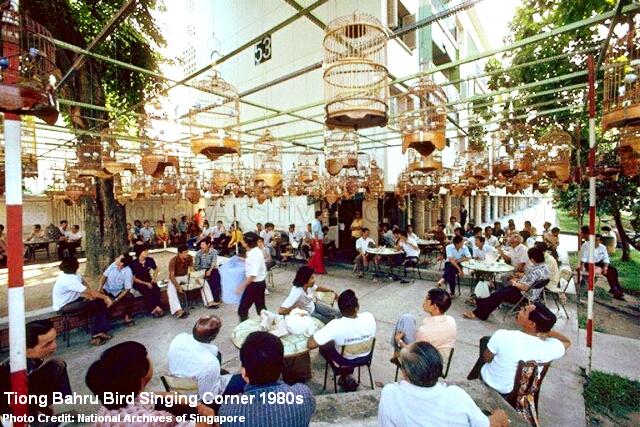 In the mid-eighties, during the Sundays, the number of bird lovers outside the coffeeshop could be as high as 300, made up of mostly men, old and young, and among them were contractors, businessmen, technicians and retirees. Some of the bird lovers even came all the way from Ang Mo Kio and Jurong.

Hundreds of bird cages could be seen suspended from a metal trellis. It was put up by the kopitiam owner Teah Lam Kuan, who saw his business grew tremendously in the eighties. Such was the high popularity of the Tiong Bahru bird singing corner that it was promoted by STPB as a tourist attraction, and was regularly featured in foreign newspapers and magazines.

The news spread fast and many curious tourists and foreigners could be seen visiting the place and snapping photos of the crowds and bird cages. Renowned American flautist Herbie Mann (1930-2003) paid a visit to the Tiong Bahru bird singing corner in 1984 to perform “against” the songbirds, while Dutch journalist Guus van Bladel joined the folks at the Tiong Bahru kopitiam to write about the interesting hobby for his Dutch newspapers.

During the 1986 Christmas Day, KLM, the Dutch airlines, even organised a bird-singing competition at the bird singing corner, sponsoring many flight tickets as top prizes. It also paid for the hooks and number tags used for the hanging of the bird cages at the corner.

The Singapore Improvement Trust (SIT) flat of Block 53 was later converted into a hotel, while the bird singing corner was renovated in 1997 by the Tanjong Pagar-West Coast Town Council in a $60,000 upgrading project. In 2008, a bird singing competition was held at the newly reopened Tiong Bahru bird corner, but the hype and buzz seen in the older days could no longer be duplicated.

Bird singing hobby is still very much alive in Singapore today, although its most spectacular moments were arguably between the seventies and nineties. 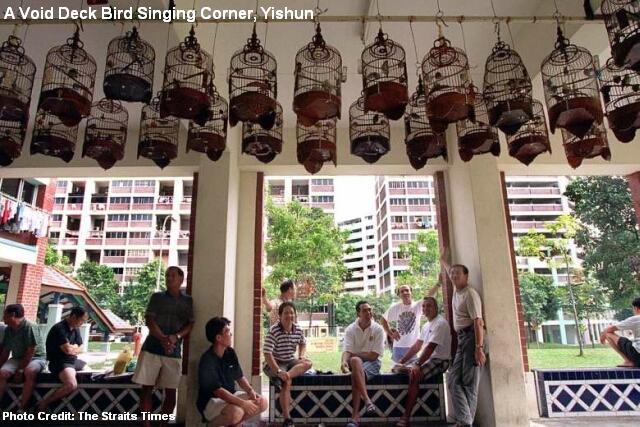 3 Responses to Bird Singing, a Favourite Pastime of the Past