Fifty years, fifty old and new photos of Singapore, and fifty familiar names, events and landmarks that helped to shape and define Singapore between 1965 and 2015.

To celebrate SG50, let us take a look at Singapore’s enormous progress and achievements as a new nation in the past five decades.

With tears in his eyes, former Prime Minister Lee Kuan Yew announced the separation of Singapore from Malaysia on 9 August 1965. A new nation was born. 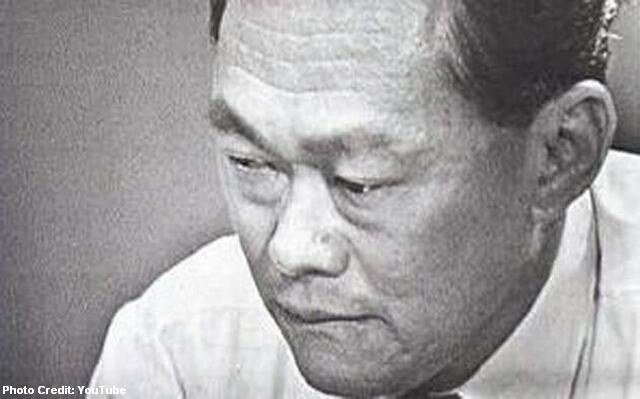 Singapore held its first ever National Day Parade (NDP) at the City Hall on the morning of 9 August 1966, where six People’s Defence Force contingents participated.

The National Service (Amendment) Act was passed and came into effect on 17 March 1967. Around 9,000 male youths were called up to form the country’s first batch of national servicemen.

Established on 1 June 1968, the Jurong Town Corporation (JTC) was tasked with the development of industrial estates and setting up of factories at Jurong, Kranji and Sungei Kadut.

Developed by the Singapore Improvement Trust (SIT) and completed by Housing and Development Board (HDB), Queenstown, the first satellite town in Singapore, had almost 20,000 dwelling units by 1969.

In 1970, Golden Shoe, lying at the heart of Singapore’s Central Business District (CBD), was embarked in its first urban redevelopment project by the government.

The $3.5-million Jurong Bird Park was opened on 3 January 1971. Home to more than 8,000 birds of 600 species, it is Asia’s largest bird park and has the world’s tallest man-made waterfall. 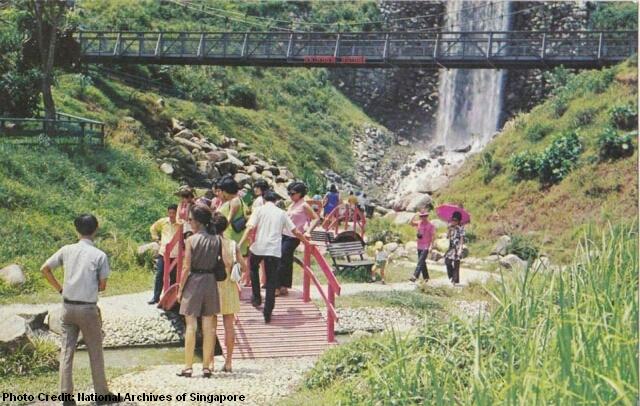 The 50,000-capacity National Stadium had a grand opening on 21 July 1973. For three decades, it had been the venue of many Southeast Asian (SEA) Games, Malaysian Cup football matches and National Day Parades. 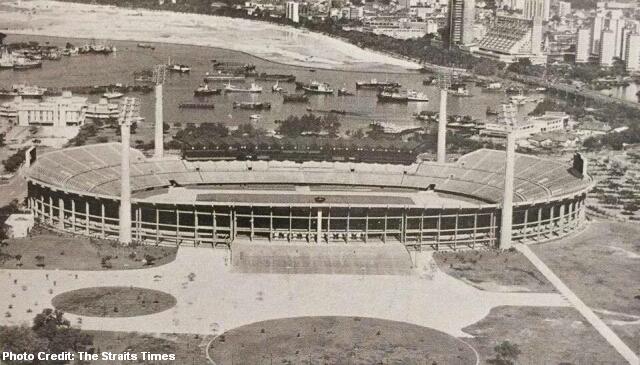 Toa Payoh Town Garden, one of Singapore’s oldest and most iconic parks located in a residential town, was completed and opened in 1975.

The Toa Payoh Town Garden was also home to the first version of the iconic Dragon Playground, which was a hit among children in 1976. It gave rise to the popular locally-designed sand playgrounds at the new towns in the eighties and nineties. 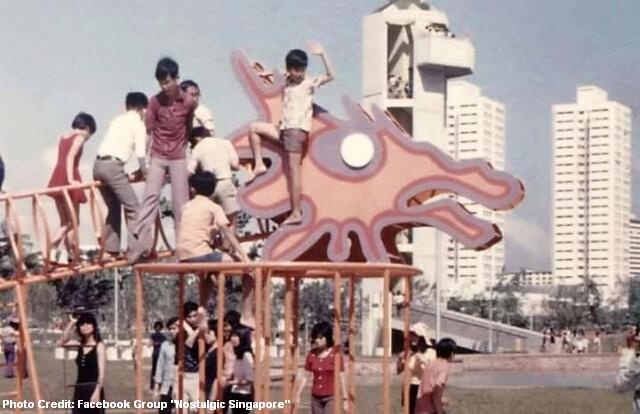 The first Lion City Cup was held at the National Stadium and Jalan Besar Stadium between 8 and 18 December 1977. The Singapore team, featuring a teenage Fandi Ahmad, won the tournament by beating six participating Malaysian states.

The Singapore River in 1978 was filled with goods-ferrying wooden bumboats called tongkangs and twakows. They would be cleared five years later in the River Clean-Up Campaign. 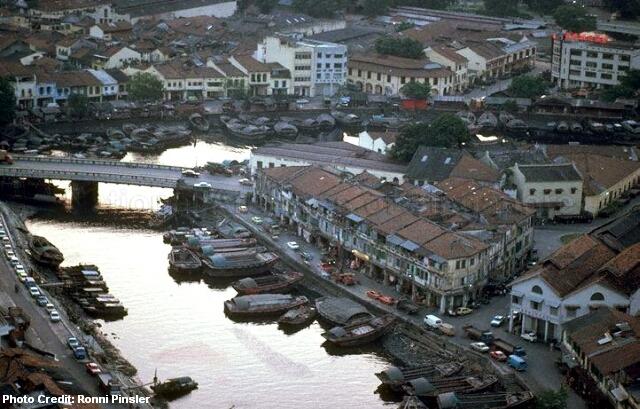 The first National Courtesy Campaign was launched on 1 June 1979, with the catchy slogan “Make Courtesy Our Way of Life”. The iconic mascot Singa would be introduced three years later. 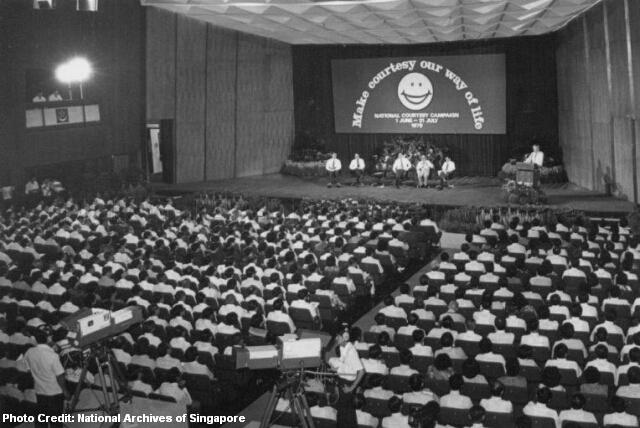 In 1980, the Housing and Development Board (HDB) completed Ang Mo Kio, one of the earliest and largest new towns in Singapore, after seven years of development.

Named after the second President of Singapore, the majestic 1.8km-long Benjamin Sheares Bridge was opened on 29 September 1981 after three years of construction.

To further enhance the popularity of Sentosa as an upcoming resort destination, a monorail system was built and opened in February 1982 to ferry visitors around the island.

Singapore hosted the 12th Southeast Asian Games (SEA Games), its second hosting after the 7th SEA Games in 1973, between 28 May and 6 June 1983. Singapore finished fourth in the tournament with 38 gold medals, 38 silvers and 58 bronzes.

The iconic National Theatre, dubbed as the “People’s Theatre”, held its last show in January 1984 before the building was demolished two years later.

Singapore’s annual street parade Chingay was held at Orchard Road for the first time on 24 February 1985, attracting thousands of spectators.

Changi Airport welcomed its 10 millionth passenger in 1986 after almost five years of operation. Two decades later, the airport would receive 10 million visitors in just a year. 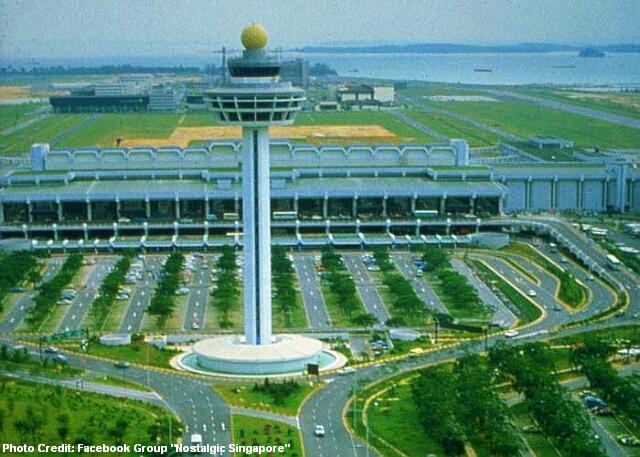 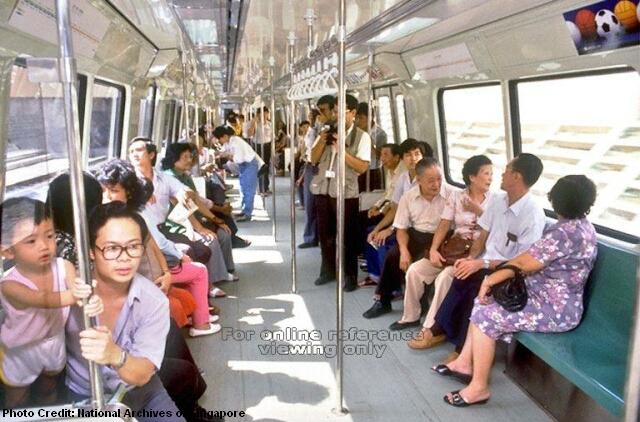 The first Swing Singapore was held at Orchard Road in August 1988.  As many as 250,000 people turned up at the massive street party filled with lights and music. 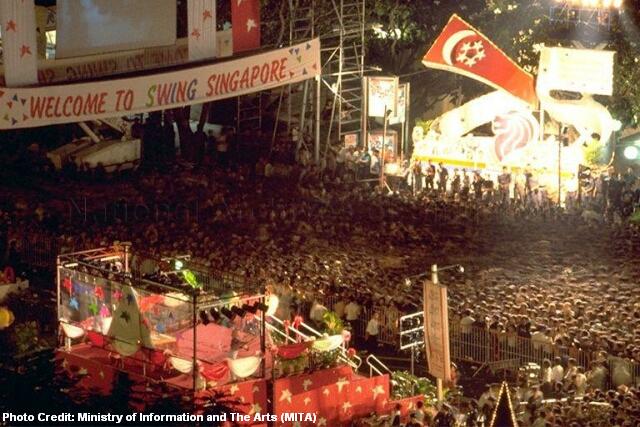 Dismantled earlier due to the MRT tunnelling works, the century-old Telok Ayer Market was reassembled in 1989 in a $6.8-million renovation project. It was renamed Lau Pa Sat after its completion.

A packed National Stadium rallied to support the Singapore team in a Malaysia Cup game against Kedah in August 1990. Singapore finished as runner-up that season but would go on to win the cup four years later, before its exit of the tournament.

With the completion of the underground tunnels, the last section of the Central Expressway (CTE) was officially opened on 21 September 1991. The completed CTE, 16km long, took almost a decade and $500 million in construction. 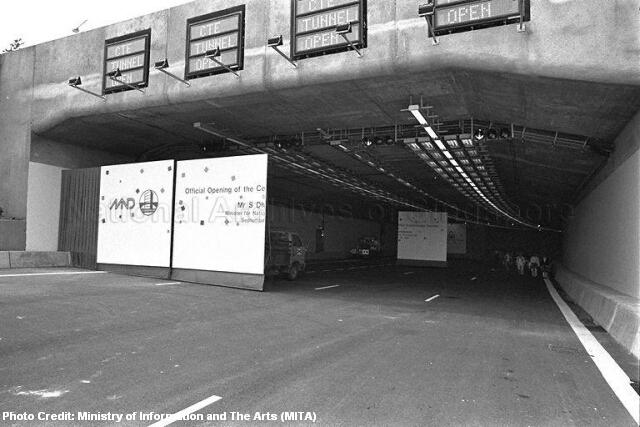 City Hall, an important landmark in Singapore during the colonial period, self-government and post-independence eras, was gazetted as a national monument on 14 February 1992. 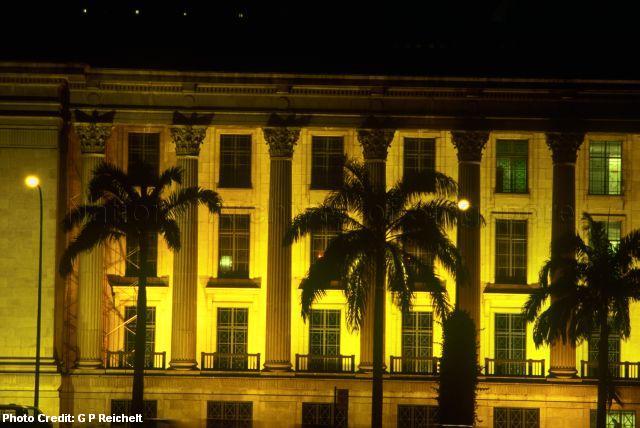 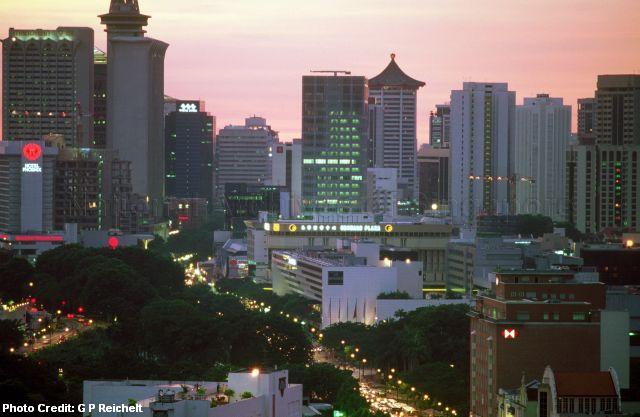 The Night Safari, the world’s first nocturnal zoo, was opened on 26 May 1994. Occupying an area of 35 hectares at Mandai Lake Road, it cost almost $63 million in its construction.

The 37m-tall tower in the shape of Merlion, Singapore’s famous icon, at Sentosa was completed in late 1995. It was commissioned by the Sentosa Development Corporation and cost $13 million. 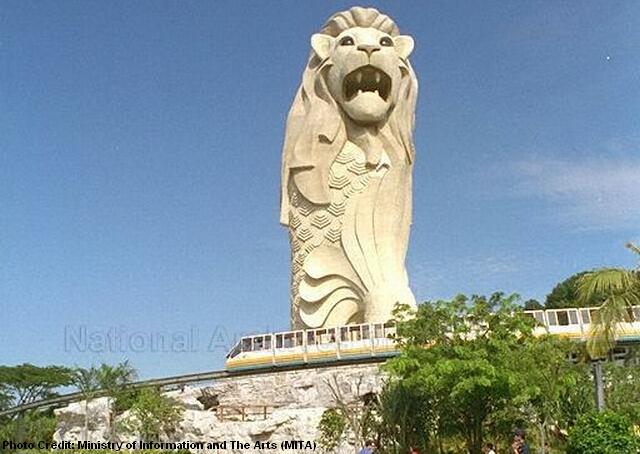 Following its exit from the Malaysia Cup, Singapore launched its own domestic league called the Singapore Professional Football League, or S-League, in 1996. The first league winner was Geylang United Football Club.

On 1 October 1997, the Port of Singapore Authority (PSA) was corporatised to continue the operation of Singapore’s container terminals, which by then was handling more than 10 million twenty-foot equivalent unit (TEU) of containers a year.

The 1999 Singapore Art Festival was held at the Fort Canning Hill, one of Singapore’s earliest recorded landmarks and home to former Majaphahit kings and British governors.

The Fullerton Building, one of the well-known landmarks of Singapore’s historic waterfront, was restored and refurbished into a boutique hotel named Fullerton Hotel, which opened in May 2000. 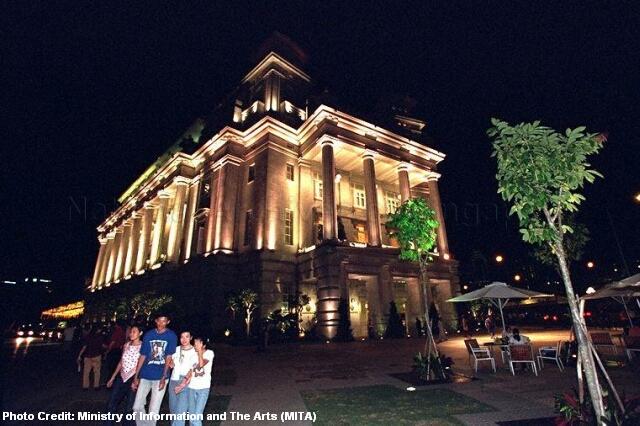 On 19 January 2001, a new official version of “Majulah Singapura“, Singapore’s national anthem, was launched to make it easier for Singaporeans to sing as many could not reach the high notes in the original version. 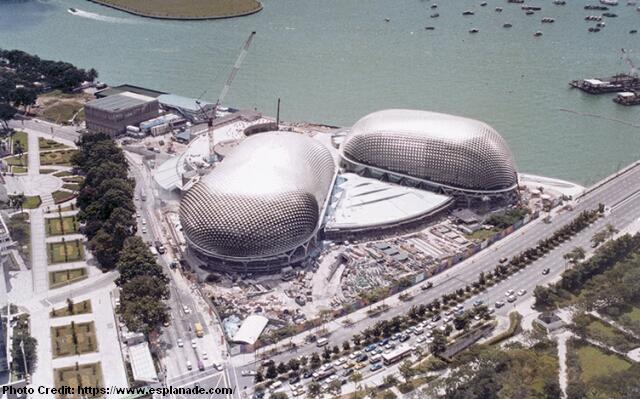 Formerly the venue for exhibitions, fairs and conferences, as well as the 1987 Miss Universe Pageant, the World Trade Centre was renovated and reopened on 20 June 2003 as HarbourFront Centre. 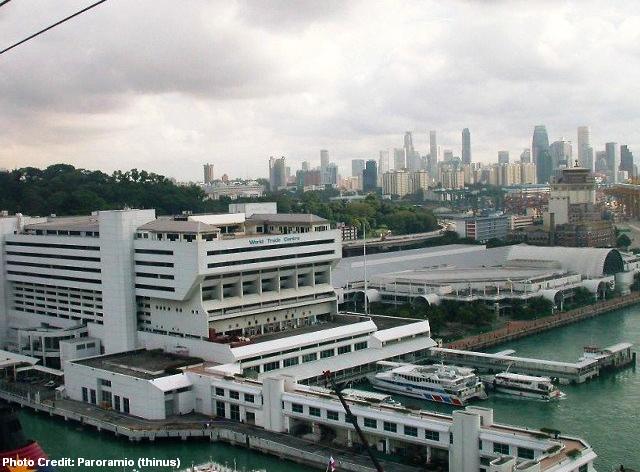 The red-bricked National Library, an iconic landmark at Stamford Road, closed its doors for the last time on 31 March 2004, and was subsequently demolished for the construction of Fort Canning Tunnel.

The world-famous Raffles Hotel, known as the “Grand Lady of the Far East” during the colonial times, was sold on 18 July 2005 to an US investment fund. Five years later, it would change hands again, this time to a Qatar sovereign wealth fund. 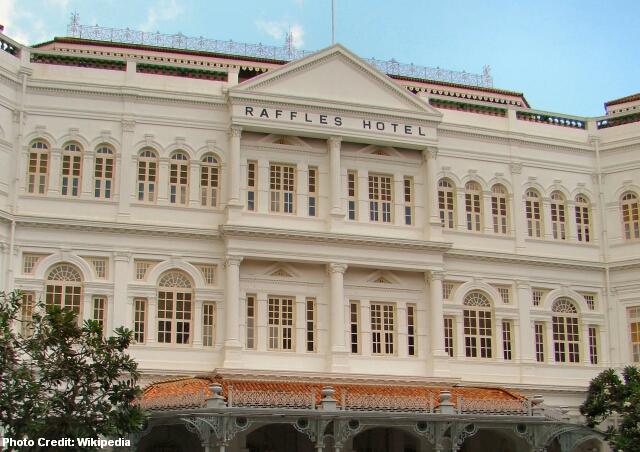 The former Ford Factory, the historical site where the British officially surrendered to the Japanese during the Second World War, was gazetted as a national monument on 15 February 2006. 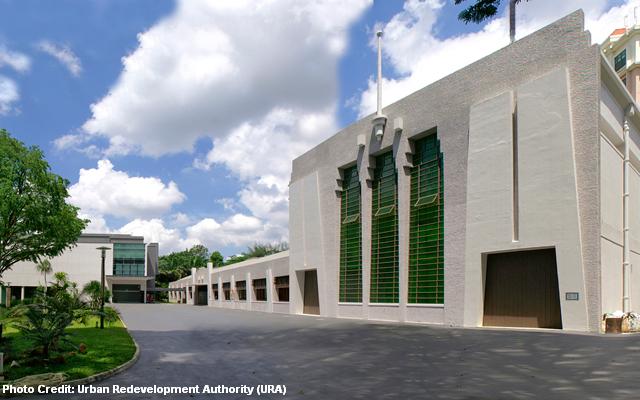 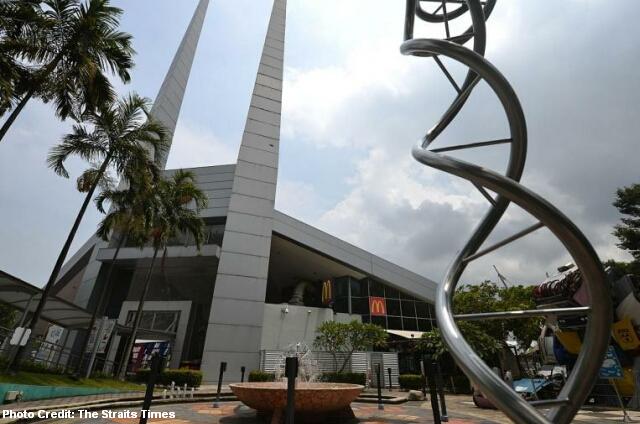 On 29 September 2008, the first Formula One Singapore Grand Prix race was held at the Marina Bay Street Circuit; it was the first ever night race in Formula One’s history. 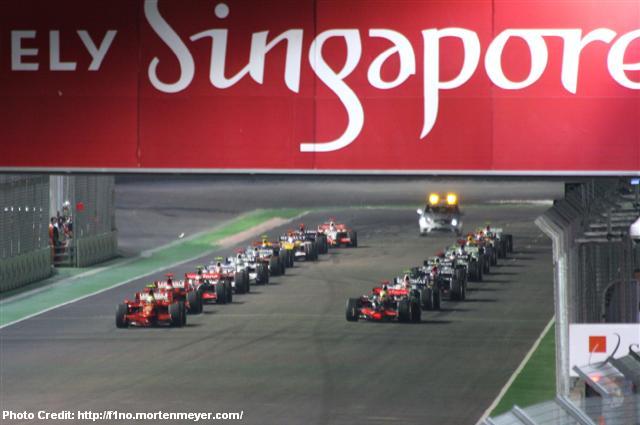 In December 2009, the Singapore Flyer created the tallest Christmas tree in Singapore. It was 83m tall and made up of 91,000 LED lights.

Singapore held the first Youth Olympic Games (YOG) between 14 and 26 June 2010, a multi-sport tournament that involved 3,600 young athletes from 205 countries.

The National Parks Board’s (NParks) vision of creating a City in a Garden became a reality on 29 June 2012 when the Bay South of Gardens by the Bay was officially opened.

River Safari, Asia’s first river-themed zoo, was opened on 28 February 2014. It has the world’s largest freshwater aquarium and houses 6,000 animals of 200 species.

We have come a long way. A great 50th birthday to Singapore!