A Walk Through The Old Neighbourhood – Redhill Close

Posted on December 8, 2011 by Remember Singapore

Redhill Close is a small estate of 21 blocks of flats numbered 1 to 3 and 5 to 22. There is no block 4 found. Many would think this is due to the number being considered inauspicious for the Chinese, but the fact is block 4 was demolished to make way for the construction of a new road.

Like the old Tiong Bahru flats, Redhill Close’s pinkish blocks, nicknamed “chek lau” (seven-storey in Hokkien), and designed with trapezoid roofs, curved-top facades and residential units at the ground floors, were built in 1955 by the Singapore Improvement Trust (SIT), which means they have witnessed the development of Redhill for 55 years.

When the flats were first built, they were rented at a monthly rate of $52 to the residents previously living at the kampong in Redhill. This rental policy lasted until 1982, after which the flats were sold to their occupants so that the long-time residents could at last have their own units.

The peaceful estate is located between the popular Redhill Market, famous for its satay bee hoon and prawn noodles, and the Bukit Merah Food Centre, which is on the other side of the busy Jalan Bukit Merah and serves delicious chicken rice, fishball noodles and fish soup.

There is a famous Malay myth about how Redhill, or Bukit Merah (literally means hill red), got its name. In the past, the coast of Singapore was infested by fierce swordfish. The villagers and fishermen would be attacked if they ventured near the water. A little boy called Hang Nadim proposed a solution for the Sultan, which was to build barriers made of banana tree trunks along the affected coast.

When the swordfish tried to attack the villagers again, their pointed beaks pierced through the barriers and were trapped immediately. The smart boy became popular among the villagers, inviting jealousy from the Sultan. Fearing his rule would be threatened in the future, he sent his soldiers to kill the boy who lived on top of a hill. The poor boy’s blood flew down the hill, soaking the whole hill red.

Redhill, also fondly called ang sua by the Chinese, actually once referred to a larger hill at present-day Henderson estate. In fact, the whole Bukit Merah lies on a stretch of hilly plains, where the highest point is Mount Faber at 105m high. Years of development have seen the hill near Henderson trimmed down to the current size and the Malay kampongs replaced by the flats at Redhill Close in the fifties.

A large part of the area at Redhill, Hendersen and Tanglin Halt were allocated for industrial use during the sixties. Glass manufactor, liquor distillery and food, garment and perfume factories once thrived here.

In the early seventies, HDB built many flats for the poor and old folks at Bukit Merah View, just beside Redhill Close separated by Hendersen Road. The one-roomed flats were fully subsidised by the social welfare service.

The National Day Parades (NDP), usually held at the Padang (1966-1974) and the National Stadium (1976-2006), were organised at decentralised locations in the period between 1975 to 1983. In 1975, Redhill was selected as one of the sites for the decentralised event for the NDP. The contingents of army, navy, air force, police and other uniform groups and unions assembled and marched on a big open field at Redhill. 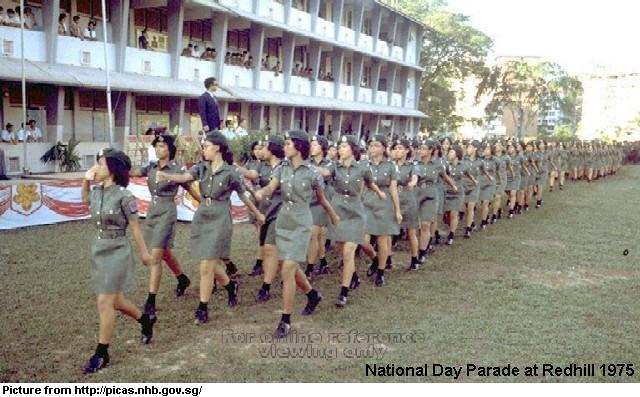 A stretch of the current 3.5km-long Jalan Bukit Merah, the main road here, was known as Silat Road in its early days. In 1924, The former Sikh Police Contingent built the Silat Road Sikh Temple (Gurdwara Sahib Silat Road) along the road, which has the largest Sikh temple dome in the world. It also houses the tombstone of the famous anti-British Sikh revolutionary Bhai Maharaj Singh Ji (died 1856), shifted to the temple from Singapore General Hospital (SGH) in 1966. During the Second War World, the Sikh Temple served as a refuge for Indian women and orphans.

A small Chinese temple called Tang Suahn Kiong San Soh Hoo Chu Temple, previously the second oldest temple in Singapore after Thian Hock Keng Temple (built in 1842), once stood at Henderson Road, but it was torn down in 1978 to make way for a swimming pool. The temple trustees and devotees appealed to the authority without success to conserve the 120-year-old temple. It was built in 1858 and worshiped Kwan Kong, the God of War.

Recently, the flats at Redhill Close are selected for the Selective En-bloc Redevelopment Scheme (SERS). The estate has gone through the Main Upgrading Programme (MUP) in the nineties, adding an extra space at the kitchen and having the lifts upgraded, but that cannot stop the prime residential land from being used for redevelopment.

Many residents, most of them elderly, express sadness in having to move from the place they have called home for decades. Some of the prominent residents include the former samsui women who had contributed massively to the construction sector of Singapore from the fifties to the sixties. New replacement units at nearby Henderson Road will be prioritised for them.

92 Responses to A Walk Through The Old Neighbourhood – Redhill Close