Posted on December 27, 2022 by Remember Singapore 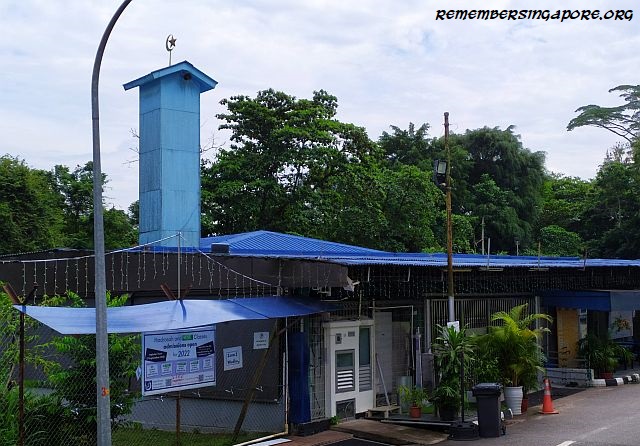 Jalan Ibadat is “street of worship” in Malay. The road was constructed in the late sixties for the mosque, which, funded by generous public donations, was officially opened in 1968 by Haji Ya’acob bin Mohamed (1925-1989), the then-Minister of State and an advocator of Malay interests, language and education in Singapore. Many Muslim residents from the nearby kampongs were invited to witness the opening ceremony.

In 1983, the mosque’s management held its inauguration ceremony together with a sports event at Tech Whye to raise funds for its $30,000 renovation project. Sidek Saniff, the Parliamentary Secretary to Trade and Industry and Social Affairs was invited as the guest of honour. Other fund raising means were also carried out by the mosque, such as a donation drive by students on Hari Raya Puasa in the previous year. 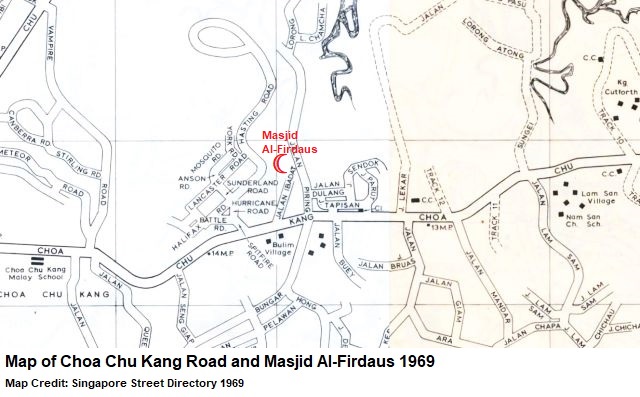 The mosque has largely retained its humble appearance throughout the decades. Its surroundings, on the other hand, underwent gradual changes. The mosque’s neighbour Tengah Air Base was transferred from the Royal Air Force (RAF) to the Republic of Singapore Air Force (RSAF) in the early seventies. The eighties and nineties saw the demise of Choa Chu Kang Road’s many villages, such as Bulim Village, Lam San Village, Keat Hong Village, Kampong Tengah and Kampong Cutforth.

Rural roads branching off Choa Chu Kang Road were also expunged by the mid-nineties. Jalan Dulang, Jalan Sendok, Jalan Parut, Jalan Bungar, Jalan Ara, Jalan Buey and Jalan Mandar were some of the roads that had walked into history, leaving only a few behind today, such as Jalan Piring, Jalan Tapisan and Jalan Lekar.

One side of Choa Chu Kang Road was allocated for local horticultural and aquacultural production and trades, where aquarium farms, plant nurseries and animal sanctuaries were set up in the areas between Jalan Lekar and Sungei Tengah Road. The opposite was reserved for installations by the Ministry of Defence (Mindef) and Ministry of Home Affairs (MHA), where the Army Logistics Base (opened in 2002), Keat Hong Camp (2005) and Home Team Academy (2006) were built.

As for Masjid Al-Firdaus, it launched another charity drive in the nineties for a $100,000 upgrading project. Volunteers sold fried chicken rice and charity cakes to raise the funds. In 1997, the Majlis Ugama Islam Singapura (MUIS) issued invitations to interested parties to take part of an open tender for the mosque’s upgrading works. After the renovations were completed in 1999, Masjid Al-Firdaus was able to accommodate as many as 200 people for prayers, classes and other religious purposes.

In 2000, Masjid Al-Firdaus was among the 33 organisations and companies in Singapore to participate in the Skills Upgrading Program, by actively playing the role as an Islamic institution in promoting culture and pursuing knowledge in life.

Other than the mosque, one can still find traces of nostalgia along Old Choa Chu Kang Road today, such as the old street signages and an original vintage bus stop dated back to the seventies. The former Lam Soon Community Centre building was recently demolished in 2021 to make way for the new Animal Quarantine Centre.