Posted on January 30, 2014 by Remember Singapore

Some traditions survive the test of time. Others disappear due to certain circumstances. Lion dances, angpows, Mandarin oranges and auspicious couplets have always been the items commonly seen in Chinese New Year celebrations in Singapore. More than 40 years ago, there was also another item deemed indispensable for the most important festival for the local Chinese. It was the firecracker.

The origin of firecracker was said to have dated back to the Song Dynasty of China (960-1279). It was first intended for driving away evil spirits that caused illnesses, but over time, it became an integral part of joyous events and festivals. In Singapore, firecrackers were also widely and popularly used during Chinese New Year and festivals of other races such as Deepavali and Hari Raya. 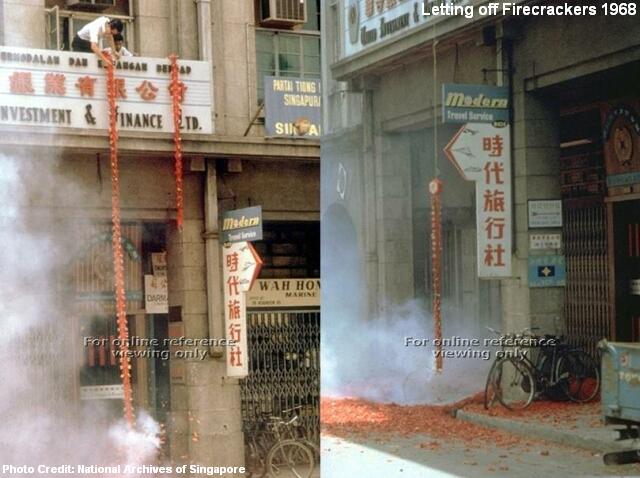 In the sixties, “cracker wars” were rampant, especially in the downtown area around North Bridge Road. During the zhap goh meh or Yuan Xiao Jie (the 15th and last day of the Lunar New Year), Chinese businessmen would compete with each others by hanging and letting off long firecrackers at their shophouses. Packets of firecrackers would also be thrown indiscriminately onto the roads, sometimes posing a danger to the motorists and pedestrians.

During the Lunar New Year period in 1970, joy was turned into grievance after more than three firecracker-caused fires broke out at areas around North Bridge Road, Aljunied Road and MacKenzie Road. A total of six people died, almost 70 were injured and eight shops burnt down. Former Prime Minister Lee Kuan Yew described the unfortunate incidents as madness, and was determined to eradicate the usage of firecrackers.

In March 1970, the legislation was passed by the parliament to clamp down on the indiscriminate firing of crackers. Offenders would face a harsh fine or imprisonment. In the next two years, the ban was partially lifted during the Chinese New Year, with designated places opened for the public to let off firecrackers. However, some ignored the restriction and continued to fire crackers at will. 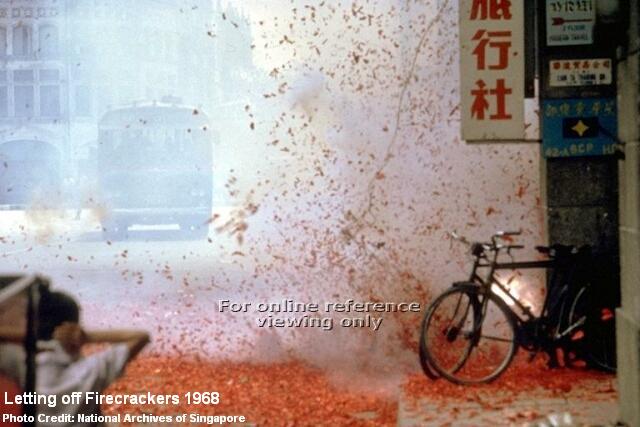 On the Chinese New Year eve in 1972, two police constables were attacked by six men at Upper Serangoon Road when they tried to stop them from firing crackers at a non-designated location. It proved to be the last straw, as the government later announced a total ban on firecrackers. In June that year, the Dangerous Fireworks Bill was passed in the parliament. Firecrackers became an illegal item and Chinese New Year celebrations in Singapore would never become the same again.

In the late eighties and early nineties, the “Pop Pop” pellets became hugely popular with their crackling sounds when thrown to the ground, simulating the noise of firecrackers. Many kids would buy and throw the pellets down onto the void decks and staircases in large numbers. Unsuprisingly, they were also later banned in Singapore.