A Little History along the Kallang River

Posted on November 1, 2016 by Remember Singapore

The Kallang River is Singapore’s longest river, starting from the Lower Peirce Reservoir, via Ang Mo Kio, Bishan, Toa Payoh and Geylang Bahru, and ending at the Kallang Basin. The name Kallang had appeared as early as 1835, in a map drawn by George Dromgold Coleman (1795-1844), an Irish architect, planner and surveyor of early Singapore. 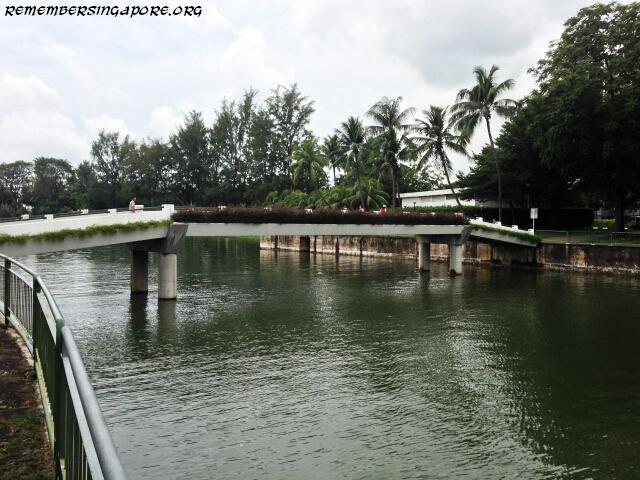 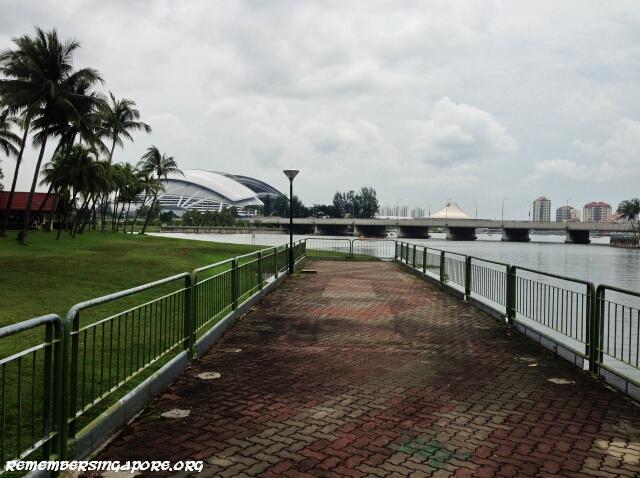 Kallang as a place name was derived from one of Singapore’s earliest settlers orang kallang. Originated from Java, Indonesia, the orang kallang were skillful boat dwellers and had already made their home at the swamps of Sungei Kallang when Sir Stamford Raffles arrived at the island. In 1824, the orang kallang were resettled by the Temenggong of Johor to the Pulai River after Singapore was ceded to the British.

Huge mangrove swamps had existed on both sides of the Kallang River. The swampy areas on its southeastern bank was filled up in the 1930s for the construction of the Kallang Airport, while its northwestern side was reclaimed in the sixties, when the Kallang Basin was designated as an upcoming industrial estate. 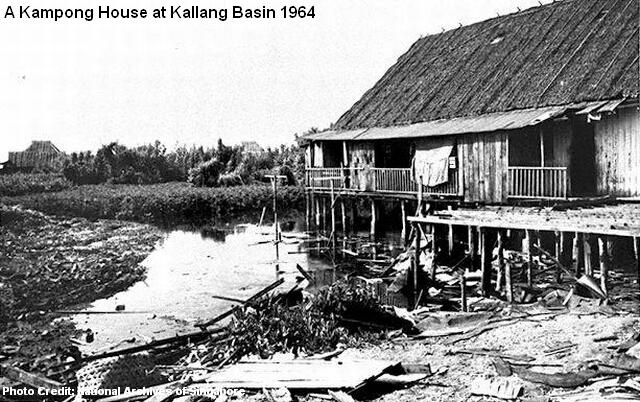 In 1964, millions of tons of earth were transported from Toa Payoh to dump into the Kallang Basin. The Kallang River was straightened, and roads widened. About 388 acres of new land were made available by 1968, largely reserved for the setting up of light and medium industries and low-cost flats.

Named Kallang Basin Industrial Estate, the new industrial estate, when completed, was Singapore’s second largest after the Jurong Industrial Estate. Some of its early tenants included the Blue Box Factory, Singapore’s first toy factory (opened in 1968), Texas Instruments (1969) and General Electric (1970). In addition, some 15,000 housing units were built to accommodate the workers and those who were affected by the urban renewal projects. 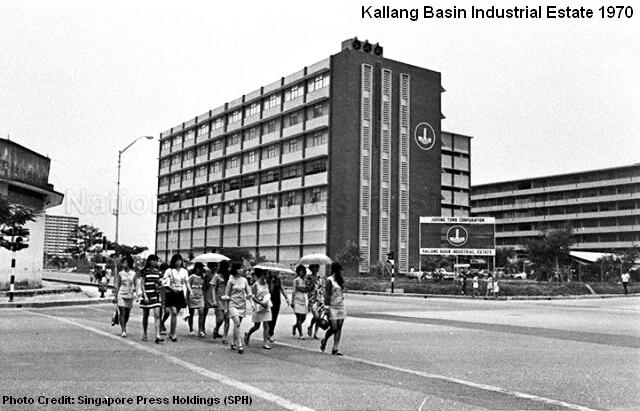 In 1971, the Kallang Basin Industrial Estate was further expanded. Kampong Soopoo, a squatter colony in the vicinity, was demolished for the development of new light industries. More than 100 families from Kampong Soopoo were compensated and resettled at the Housing and Development Board (HDB) flats at Toa Payoh. The old shophouses along Kallang Road were torn down too, replaced by two seven-storey flatted factories used for the manufacture of garments, electronics and printing materials.

Many prominent landmarks, past and present, have existed at Kallang. Some of the most iconic ones were the Kallang Gasworks (1862-1998), Kallang Airport Building (1937-Present), National Stadium (1973-2007), Merdeka Bridge (1956-Present) and Sri Manmatha Karuneshvarar Temple (1888-Present). 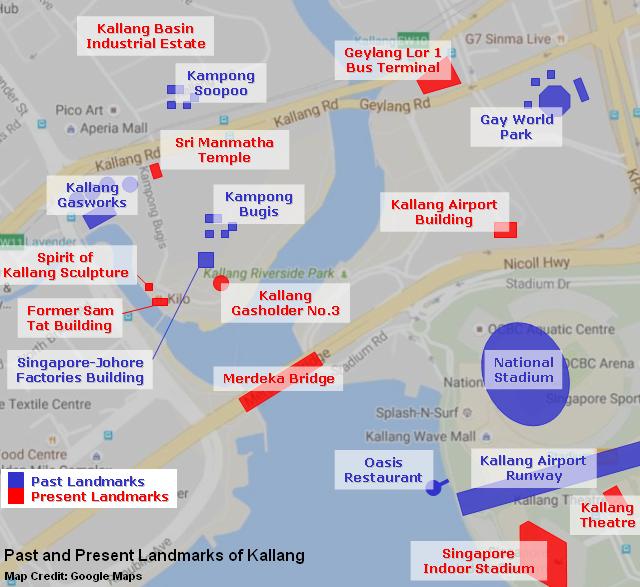 For over a century, the huge bluish cylindrical Kallang Gasworks was Kallang’s most iconic landmark. It was built in 1862 by the Singapore Gas Company to supply piped gases for the street lighting. The Gasworks had originally four tanks: The first two were built in 1862 but they were demolished in 1957; the third and fourth were both added in the early 20th century. 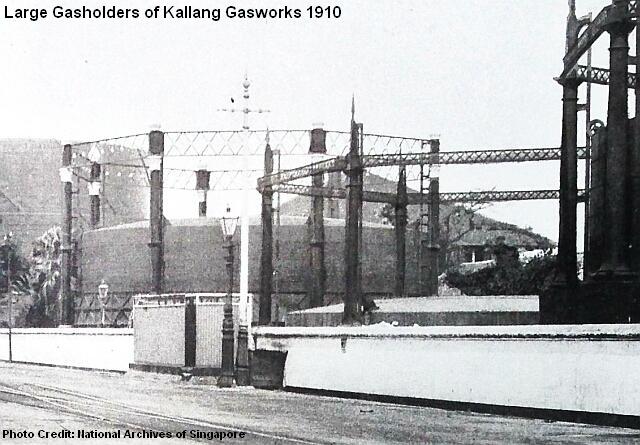 The Kallang Gasworks had produced and supplied gas continuously for more than a century except during the Second World War. Also known as huay sia, or “fire city” in Hokkien, many locals would avoid the Kallang area due to the stench of gas as well as fears of an exploding Gasworks.

By the 1950s, more piped gas was used for cooking and heating than its supply for the street lamps. The last gas-supplied street lamps officially walked into history in 1956, replaced by the electricity-powered street lighting. 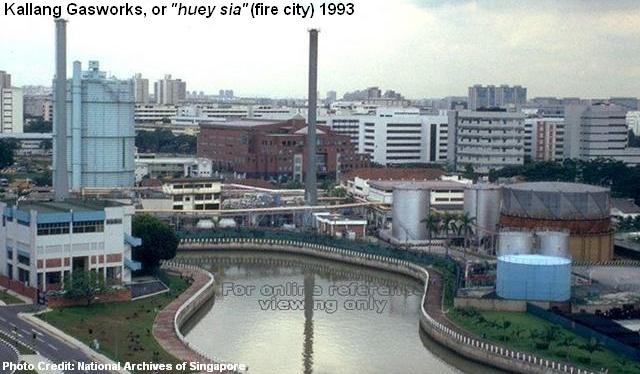 Kallang Gasworks in 1958 commissioned three state-of-the-art production plants and switched its feedstock from coal to fuel oil. It became the first gasworks in Southeast Asia to use fuel oil as its raw material. In 1966, it changed its feedstock again, this time to the cleaner and more efficient naphtha. 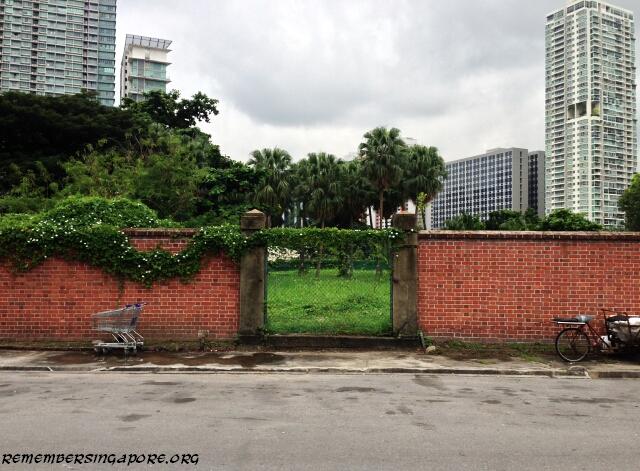 By 1997, all primary gas production in Singapore had been shifted to the new $240-million Senoko Gasworks. The 137-year-old Kallang Gasworks was retired a year later; its operations were ceased, with most of its plants, equipment and structures dismantled. 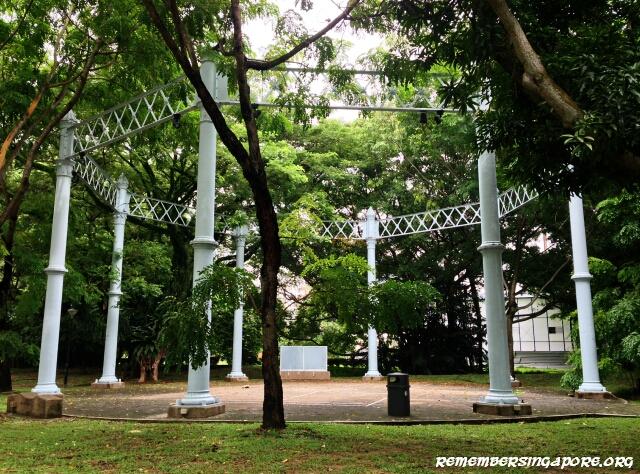 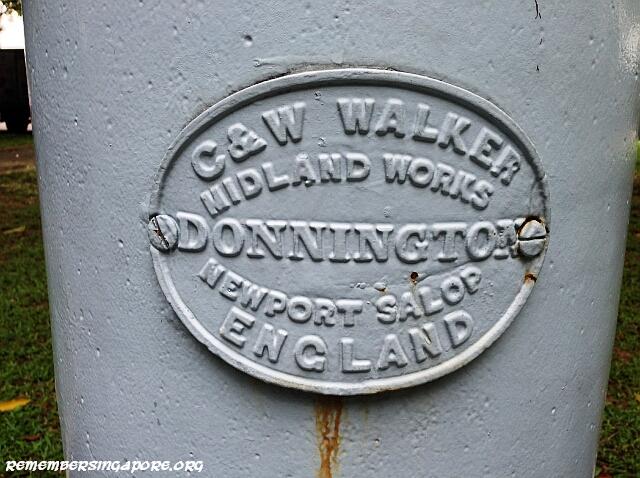 As a tribute to Kallang Gasworks’ contributions to Singapore’s economic development, the supporting pillars and girders of its Gasholder No. 3 (above), the gasworks’ oldest remaining structure, were preserved and refurbished. They were later installed at the Kallang Riverside Park.

Today, the Gasholder No. 3 structure and the Spirit of Kallang sculpture (below), created by Lim Leong Seng using the leftover materials from Kallang Gasworks, pay a special homage to the former iconic landmark of Kallang. 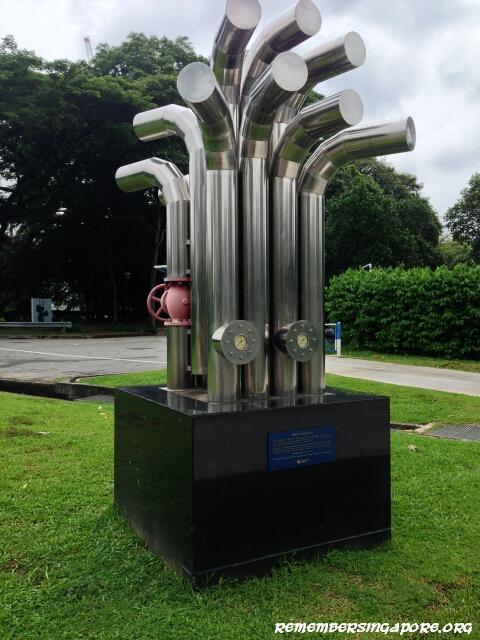 Singapore’s first civil airport, Kallang Airport was opened in 1937 after six years of construction. Built on reclaimed lands, it had operated for almost two decades, earning the distinctive honour of being the British Empire’s finest airport during its early years. In 1955, the opening of Paya Labar Airport spelt the end of Kallang Airport as the former took over Singapore’s main operations in civil aviation. 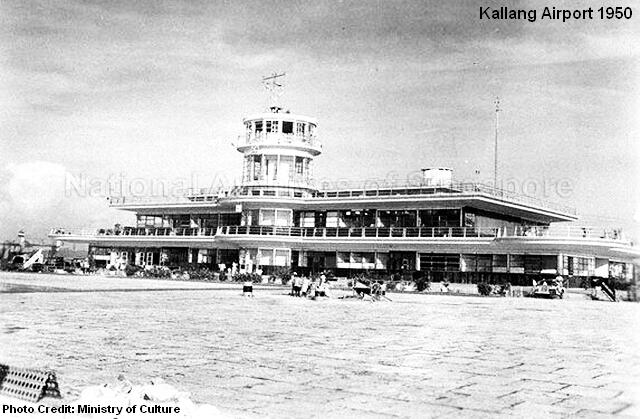 Kallang Airport was made up of a main terminal building with a control tower, side blocks, hangars and a runway. The main Kallang Airport Building was designed in early modernist British architectural style, with its interiors decorated with Art Deco features. Its main runway was originally grassy. During the Second World War, after occupying the airport, the Japanese extended the runway and converted it into a concrete one.

The British regained Kallang Airport after the war, but it was not until 1949 before the airport was again used by civil airplanes. The aviation industry had developed quickly in the 1950s. With larger planes and more congested air traffic, it was increasingly clear that Kallang Airport was unable to cope. It was eventually closed after 1955 when Paya Lebar Airport became operational. 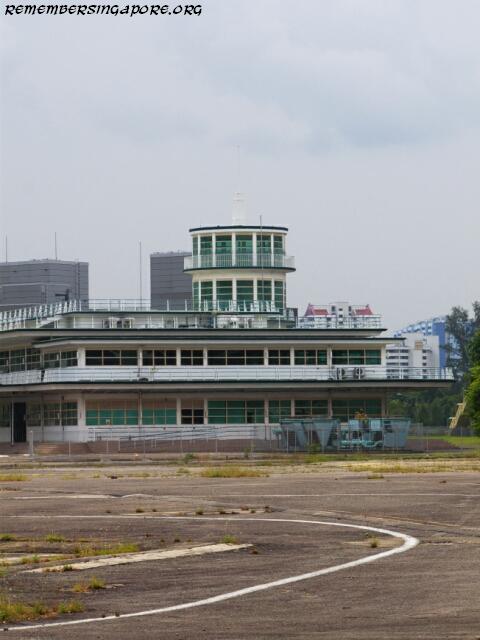 With its closure, the airport building was occupied briefly by the Singapore Youth Sports Council, while the rest of its vacated premises was converted into Kallang Park. Between 1960 and 2009, the former Kallang Airport Building was used to house the People’s Association (PA) headquarters, Public Works Department (PWD) and Central Manpower Base (CMB). 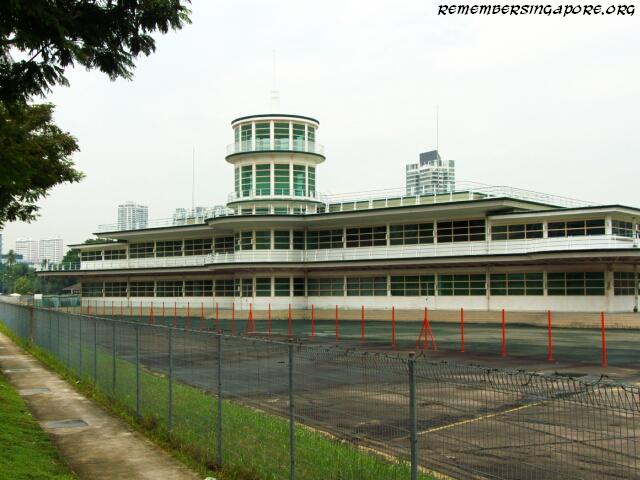 Although briefly used in the eighties as a drag racing track and temporary carpark, the airport runway was left largely abandoned. The former Kallang Airport Building, on the other hand, was preserved and extensively restored in the mid-nineties. Awarded the conservation status by the Urban Redevelopment Authority (URA) in December 2008, it has been utilised as a hosting venue for art exhibitions and other events in recent years.

After the closure of Kallang Airport, much of its premises, other than the main terminal building, was left vacated for several years. In the late fifties, Ong Eng Guan (1925-2008), then Minister for National Development, proposed “Project Lung” – a redevelopment project to convert the former airport premises into public parks and children’s playgrounds.

In early 1959, the Singapore Constitution Exposition was successfully held at the disused runway of Kallang Airport. Later that year, in October 1959, Kallang Park was officially opened. The new park, with facilities for both the elderly and young, was a unique one, as it was built through the joint efforts of the state government and the volunteering locals. 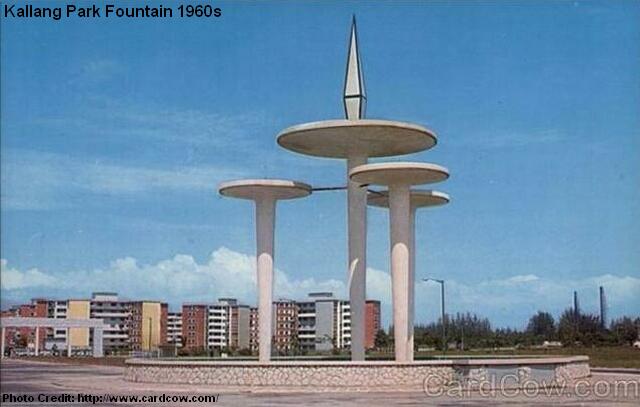 The volunteering response was overwhelming – more than 13,000 people offered their help, turning up at the site with pickaxes and shovels to join the Cabinet members, Parliamentary secretaries, Assemblymen and other government staff in clearing rubble, planting trees and even building ponds and concert stages.

Kallang Park’s most iconic feature was perhaps its futuristic-looking fountain, gifted by the Singapore Chinese Chambers of Commerce. The park was extremely popular in the sixties, hosting many interesting events such as kart racing, road safety games, fish exhibitions and agriculture show. 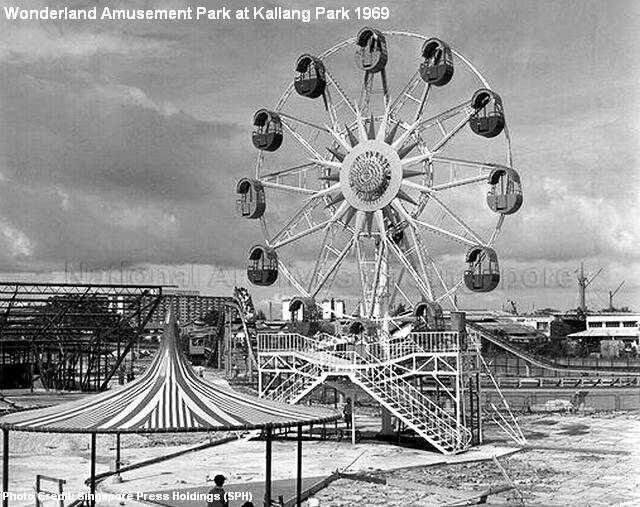 In the late sixties, Kallang Park evolved to include racing tracks and tennis courts. But its biggest attraction was the Wonderland Amusement Park, opened in July 1969 to coincide with the celebrations of 150th year anniversary of Singapore. The setting up of the amusement park cost more than $3 million. When completed, it offered fun and excitement to the public with its roller coaster, Ferris wheel, gyrating “teacups”, miniature trains, kiddy fun rides, battery operated cars and other games.

Many more facilities were later added to Kallang Park. By the mid-seventies, it had a bowling centre, ice skating rink, theatre, nightclub, the grand National Stadium and a floating restaurant named Oasis.

After Singapore’s independence, the idea of building a national stadium and good sport facilities were mooted by the government, as this would generate the people’s interest in sports as well as create a decent venue for the hosting of local and international events, which in turn would boost the national pride. 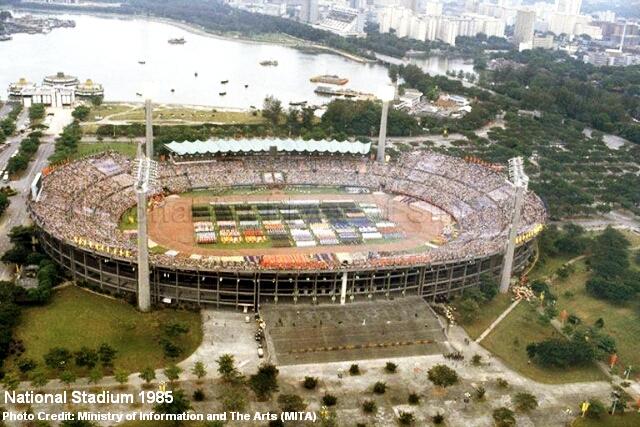 In 1966, the piling for the foundation of the new stadium began. The National Stadium was officially opened in July 1973, and would go on to become one of Singaporeans’ most familiar landmarks. Two months after its opening, the National Stadium held its first major event – the 7th Southeast Asian Games.

Local football fans would likely have the fondest memories of the 55,000-capacity National Stadium – it was regularly packed to the brim during the Malaysia Cup matches between the seventies and the nineties. Thousands of fans backed and cheered the Singapore team, creating a famous phenomenon called the Kallang Roar. 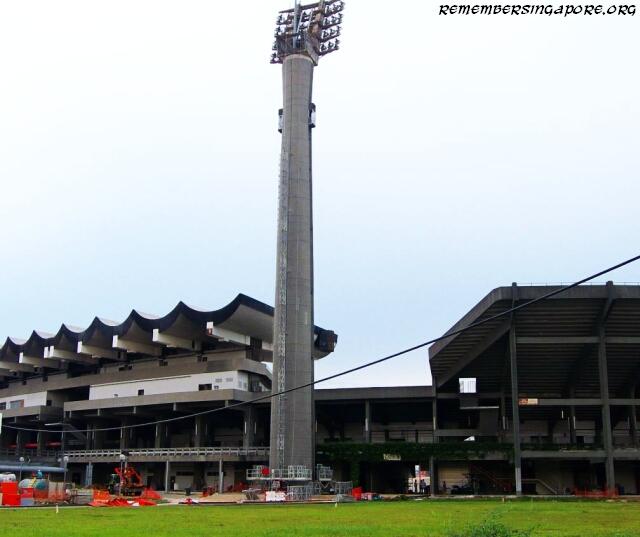 In 2005, the government announced that the aging stadium would make way for a new integrated world class sports hub. An official closing ceremony for the popular stadium was held in June 2007, although its life would be extended for another couple of years due to the delays in the new sports hub project. The National Stadium was eventually demolished in late 2010.

In the 1950s, Kallang Road was constantly bothered by traffic jams, especially during the peak hours. To relieve the traffic bottleneck, the Public Works Department (PWD) decided to build a bridge across the Kallang Basin to link Kallang to Beach Road. Costing $6 million in construction, the dual-carriageway concrete bridge was then the longest bridge in Malaya, spanning about 609 metres. 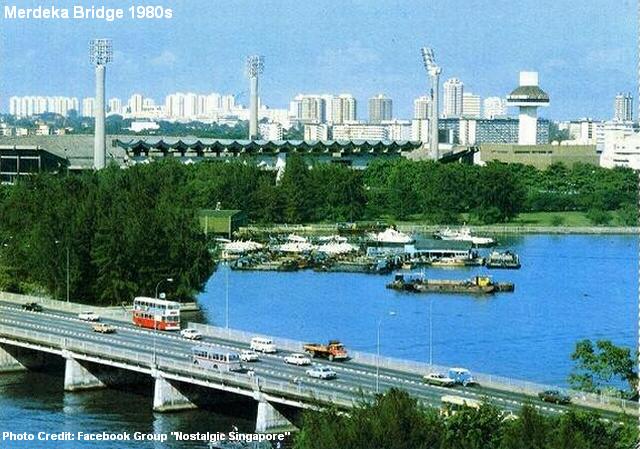 PWD’s superintendent engineer R.J. Hollis-Bee was assigned to be the main designer of Merdeka Bridge. The construction of the bridge began in early 1955, and it took more than 18 months for its completion due to various difficulties in steel supplies, deep muddy swamps and illegal squatters at the basin areas. 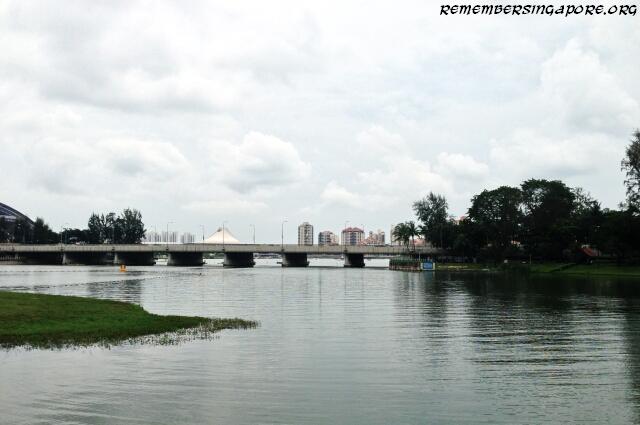 In June 1956, Francis Thomas, then Minister for Communications and Works, officially named it Merdeka Bridge. Merdeka means “independence” or “freedom” in Malay, hence the local Chinese used to refer it as dok lee kio, or “independence bridge”. After the opening of Merdeka Bridge by Chief Minister Lim Yew Hock in August 1956, Nicoll Highway became the main link between the city area and the eastern side of Singapore. 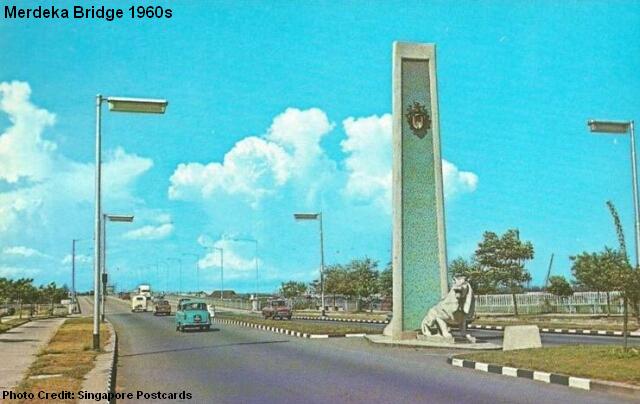 The two stone Merdeka Lions were once inseparable features of Merdeka Bridge, each standing at the foot of the tall stone structure erected at both ends of the bridge. But when the Nicoll Highway was widened in 1966, the stone lions were shifted to a site near the entrance of Kallang Park. They would be moved again, in the nineties, to Pasir Laba Camp, before settling at the Singapore Armed Forces Training Institute (SAFTI) Military Institute.

Also popularly known as the Kallang Gasworks Hindu Temple, Sri Manmatha Karuneshvarar Temple started as a simple religious establishment in early 1888, dedicated to the worship of Hindu god Shiva and catered for the Hindu community working at the gasworks. 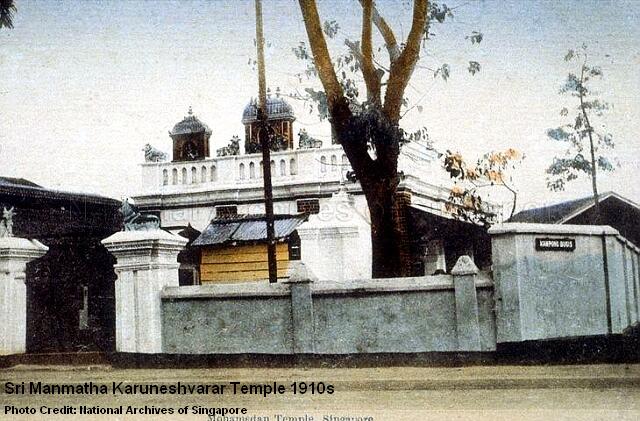 Designed in a traditional style of a typical South Indian temple, the building of Sri Manmatha Karuneshvarar Temple has an elaborate entrance filled with sculptured figures. There are also many sculptures of cows – a sacred animal in Hinduism – on the yellow temple walls that were previously painted in red and white strips. 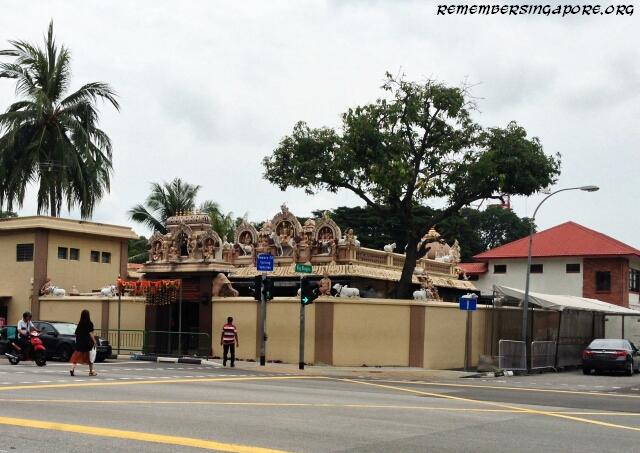 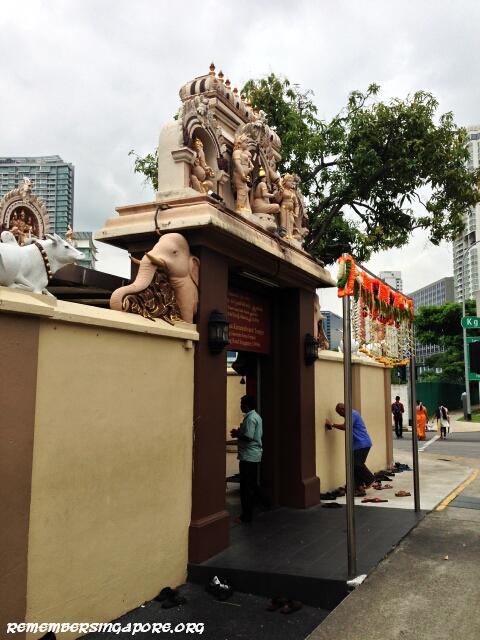 The temple’s main central shrine, also known as Mandapam, was built in 1900. In 1909, the colonial government awarded it with a 99-year lease.

During the mid-1930s, early 1950s, 1974 and mid-1990s, the temple underwent extensive renovations and upgrading. In June 2014, the Sri Manmatha Karuneshvarar Temple was added to the conservation list by the URA. It is currently one of the two remaining landmarks in the vicinity – the other is the Mun San Fook Tuck Chee Temple at Sims Drive – that has its history dated back to the 19th century. 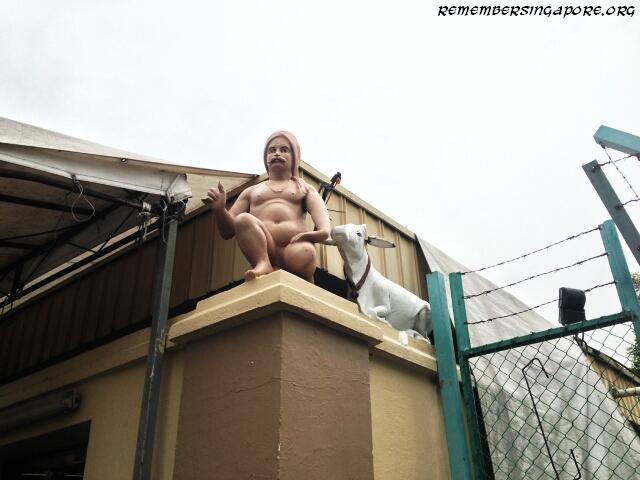 6 Responses to A Little History along the Kallang River