The Last of the Street Barbers in Singapore

Posted on October 20, 2013 by Remember Singapore

In the old days, it was well-known as the busy “Barber Street” filled with street barbers, yet the narrow back alley off Aliwal Street today is nothing but a quiet and forgotten lane unnoticed by most passers-by having their lunch at the Jalan Sultan vicinity.

While most of the other street barbers have retired or switched to other businesses, one continues to ply his trade here. Mr Tan Boon Kee, 68, is the remaining street barber at Aliwal Street, where he works from 9am to 6pm daily except Wednesdays and Sundays.

Under the makeshift tentage, Mr Tan used to have another street barber operating beside his outdoor “shop”. After that barber retired in 2009 due to some health issues, Mr Tan becomes one of the few survivors of this declining local trade that can no longer be found in other parts of Singapore except Aliwal Street, Kim Keat Lane, Tanjong Pagar and Chinatown.

A large rectangular mirror, left behind by the retired barber, still hangs on the wooden structure of the tentage. 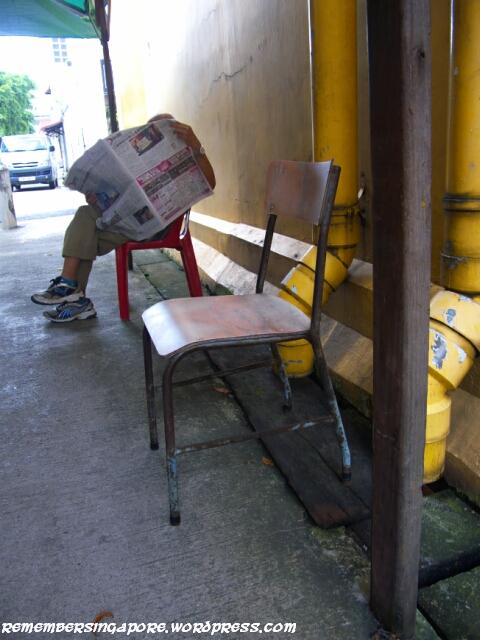 It had been a rather busy Saturday morning for Mr Tan today. He had not yet taken a break as there were several regular customers of his, most of them elderly men, waiting patiently for their hair cuts. One was quietly reading his newspapers. Another one was occasionally speaking to Mr Tan about the rising cost of food and living. Other than that, only the snipping sounds of scissors and clippers filled the quiet back alley.

Mr Tan’s trusted barbering tools such as the scissors, clippers, blades and brushes are kept neatly in the small box-shaped cupboard. It also contains a calender and a small clock to remind him of the date and time. A FM radio that broadcasts old Chinese songs accompanies Mr Tan when the business is quiet and the day is slow.

Other items include a broom, which is used to clear the hair on the ground, and stacked plastic chairs ready to serve more customers. There is also a seat cushion to be placed on the old fashioned chair when its leather seating gets too warm.

Taking about 15 to 20 minutes per head, Mr Tan made sure his customer’s hair was neatly trimmed, followed by a clean shaving of facial hair around the lips, cheeks, ears and forehead. The unsightly nose hair would also be taken care of. All these services for a price of only $6.

Rain or shine, Mr Tan used to do his barbering six days a week, resting only on Wednesdays. Business used to be much better in the past, even though there were more competitors. Today, he tends to slow down his pace, as years of continuous standing have taken a toll on his legs. Although he is now taking home only half of what he could earn in the past, Mr Tan is contended that he can still carry on what he has been doing for the last twenty years.

At Kim Keat Lane, a similar old reclining chair, cupboard and table were chained together and lined up against the wall of the five foot way of an old shophouse. Apparently they belonged to another street barber named Ah Lim, who was probably having his weekly off-days. 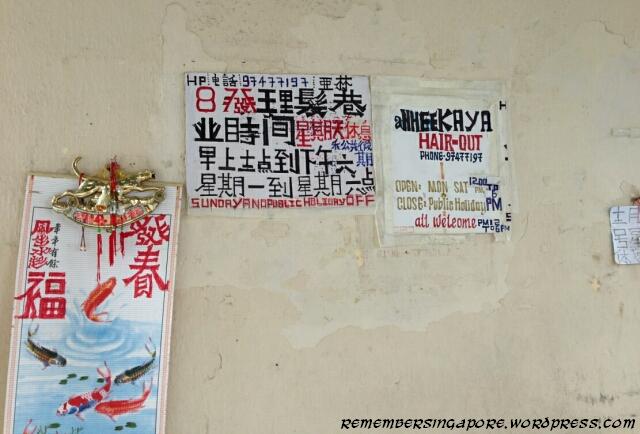 Perhaps in another couple of years, the street barbers, like many other local sunset industries, will eventually and inevitably vanish in history. But meanwhile, you can show your support by dropping by for a haircut or a chit chat.

4 Responses to The Last of the Street Barbers in Singapore