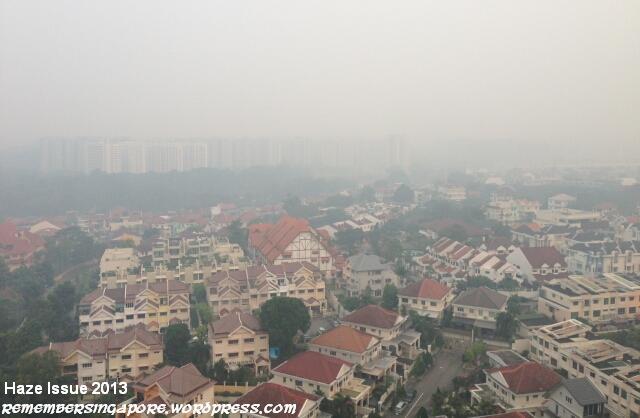 Singapore is fortunate to be freed of most natural disasters, but we are not spared of occasional floods and haze. The records at the National Archives and Newspaper Archives of Singapore show that the haze issue has been affecting Singapore and Malaysia for the past four decades. Most were due to the massive burning of forests at Kalimantan and Sumatra.

Here are some of the reports:

In October 1972, Singapore and West Malaysia were covered by thick haze after days of burning of extensive forests and grass lands around Palembang, Indonesia. The worst day happened on the 14th October, when practically every part of Singapore was fog-bound. Motorists had to switch on their full headlights at Orchard Road and Nicoll Highway.

A reddish haze hanged over the eastern and southern parts of Singapore due to the jungle clearing works at Johor Bahru and Kota Tinggi.

By October 1977, the smokes from the raging forest fires at Sumatra had covered much of Singapore and the western and southern parts of Peninsula Malaysia. Reported to be 366m high, the thick haze caused visibility to be so low that towering skyscrapers could hardly be seen from short distances.

In May 1979, a combination of mist and haze covered almost three-quarter of Singapore, reducing the visibility to less than 2km. In Bedok, neighbouring blocks of HDB flats 400m away were barely visible. The source of the haze was undetermined.

Many complained eye irritation after the Anti-Pollution Unit of the Prime Minister’s Office detected 300 micrograms of fine suspended particles in the atmosphere, the highest level since there were records. The haze was reported to be originated from forest fires. 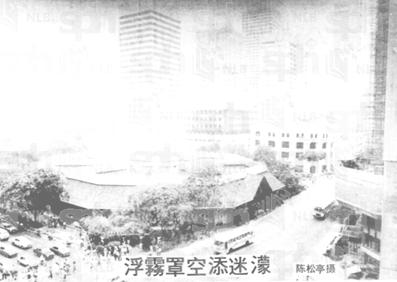 Thousands of hectares of forests at East Kalimantan were burned since March 1983, causing a blanket of smoke over Singapore, Malaysia and Sarawak. Visibility was down to 1km. Fortunately, an occurrence of widespread rain helped to lighten the hazy condition.

Days of smoky haze bothered Singaporeans in September 1987 as a result of dry weather and forest fires at Indonesia. Visibility rapidly dropped from 10-20km to 2-3km.

The 73-storey Westin Stamford, the world’s tallest hotel then, and other buildings at Raffles City were barely visible from the Fort Road flyover of the East Coast Parkway in October 1991, covered by the haze caused by the raging fires in Indonesia.

The thick smoke from the fires, engulfing forests and plantation areas at Jambi and South Sumatra, were blown by strong winds to Singapore in September 1994. The runway lights at the Changi airport had to be switched on during the day to help pilots land safely.

ASEAN ministers (of environment) gathered at Kuala Lumpur to discuss the management of haze and other forms of transboundary pollution.

The worst haze issue hit Singapore and Malaysia in September 1997, with the local 3-hour PSI (Pollutant Standards Index) level recorded at the peak of 226 (on 18th September). Known as the 1997 Southeast Asian Haze, it was caused by massive forest fires at Kalimantan and Sumatra. Singapore suffered USD300 million in losses, due to health cost, slowdown in tourism and numerous flight disruptions. Malaysia declared a state of emergency in Sarawak after their pollutant level exceeded the 500-mark. Total regional loss amounted to a hefty USD9 billion.

ASEAN officials met at Manila, seeking ways to deal with future forest fires and the haze that enveloped large parts of the region in the previous year.

Singapore provided more than $600,000 worth of forest-fire and haze-monitoring equipment to Indonesia. The Indonesian enforcement authorities were also alerted of hot spots detected by the satellite. Indonesia also passed a law to ban open burnings. The haze condition in 1999 was lightened by the rainy season.

The strong winds sent the smoke of the burnings at Borneo and Sumatra to Singapore, Peninsula Malaysia and southern Thailand. In October 2002, the PSI recorded 79. The economic losses for Singapore was estimated to be USD50 million. By January 2003, all member nations of ASEAN, except Indonesia, had agreed to sign the environmental treaty in a bid to control the recurring haze issue.

Singapore experienced a PSI of 95 in March 2005, but was spared when a worse haze situation hit Peninsula Malaysia later that year. With the pollutant index shot up to 424, Port Klang was declared an emergency state. Selangor followed suit soon after that. Hundreds of flights were suspended, and schools were shut down.

The region practically experienced haze problem every year after the millennium. Singapore experienced its worst ever haze crisis in June 2013, when the PSI level rose to an unprecedented 321 on the 19th June, before hitting an all-time high of 401 two days later.

Previously, the highest record in the new millennium was 150 in 2006 (on 7th October). In that year alone, the regional losses in economic, social and environmental aspects amounted to be approximately USD50 million.

15 Responses to Haze – A Burning Issue For Four Decades