Posted on April 9, 2012 by Remember Singapore

China was in a state of chaos in the early 20th century. A pair of Teochew brothers from a traditional family of farmers in Suatow decided to venture out into Nanyang for a better life. At age of only 15, the elder brother Lim Tow Seng (1921-1991) first arrived at Singapore in 1935. He worked hard for others, and save enough to set up a small business at Pickering Street just three years later. The business was named Lim Seng Huat (S) Limited, literally means credibility (seng) and prosperity (huat).

In 1940, Lim Tow Yong came to Singapore to help his elder brother in the provision and distribution business. Over the years, he grew from a naive kid to an eloquent sale person, taking efforts in traveling to many parts of Singapore, including kampong and plantations, to seek for new clients. From only knowing the dialect of Teochew, Lim Tow Yong also managed to learn English, Mandarin, Malay and other Chinese dialects of Hokkien, Cantonese and Hainanese. He did not manage to master Hakka though.

With Singapore in need of basic necessities after the Second World War, provision shops became a hot commodity. The Lim brothers’ business emphasised on toiletries and apparel such as China-made towels, undergarment and singlets, targeted at the middle-low income population. After the fifties, they started to distribute small popular brands from China, Hong Kong and Germany. The products now ranged from basic necessities to mattresses, blankets, pillows, lipsticks, perfume and pens.

The end of the fifties spelt a great opportunity for the Lim brothers. During that era, the main retail business for the local Chinese was concentrated at Bugis and Chinatown. The popularity of Gay World (1936-2001), New World (1923-1987) and Great World (1930s-1978) had charmed countless Singaporeans for decades. The Lim brothers decided to promote their products in these three amusement parks, and the result was overwhelming.

In 1961, the Lim brothers founded the Emporium Holdings Group based in Singapore. Five years later, in a bold move, they opened their Chinese product-selling Oriental Emporium opposite departmental giant Robinson, which was selling high-end Western goods. The gamble was a huge success. Moving into the seventies, despite facing competitions from the likes of Shankar’s Emporium and Isetan Emporium, Lim Tow Yong and his elder brother expanded the business aggressively, opening 15 departmental stores in Singapore from 1970 to 1979. 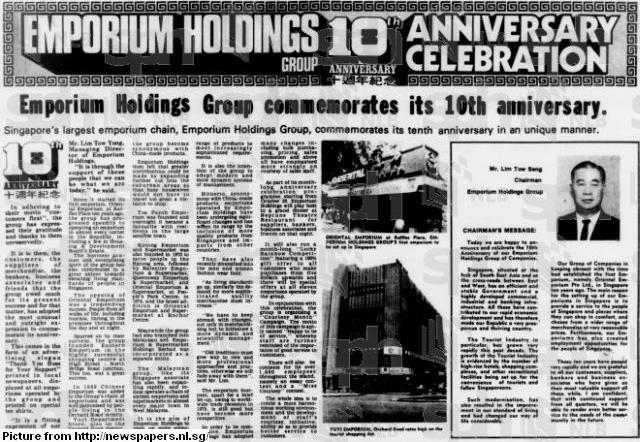 The ambitious Lim Tow Yong had his eyes on Malaysia’s vast market too. By 1980, the Emporium Holdings had department stores opened in Kuala Lumpur, Penang, Malacca, Johor, Kuantan, Kulai, Seremban and Kluang. The same year, its branch at Brunei, the largest departmental store in the country then, had a grand opening.

The reason why the official name of Lim Tow Yong’s company was Emporium Holdings instead of Oriental Holdings was because the name Oriental was already registered by another company in Malaysia. But it turned out to be a blessing as the trademark of Emporium became so well-known that almost everyone in Singapore and Malaysia had heard of it. Its Chinese name 英保良, translated directly from the English name, was a household brand.

The golden era of Lim Tow Yong and his Emporium Holdings was between 1980 and 1985. The diversification in the business saw the corporation added 13 confectioneries, convenience shops and restaurants to an already long list of 52 departmental stores in East and West Malaysia. Another 10 stores were also set up in the new venture in Hong Kong. In 1983, Lim Tow Yong was bestowed the title of Dato’ by the Malaysian state of Negeri Sembilan. 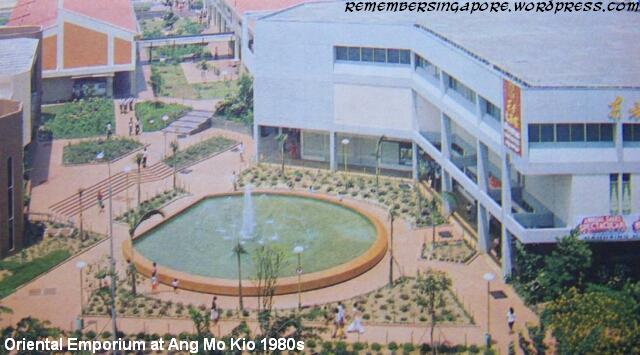 The year 1985 was the peak of Emporium Holdings. It had 113 businesses spreading all over Singapore, Malaysia, Brunei and Hong Kong. But the good days would not last, as Singapore suffered its worst recession since independence. 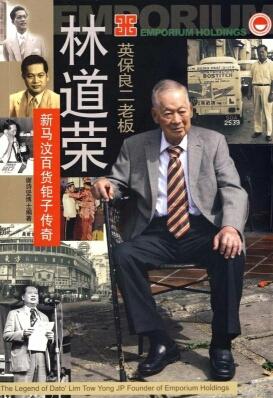 Since 1965, Singapore had enjoyed an average of more than 9% annual growth in its economy. In 1985, the rapid decline in exports, coupled with high overhead cost and a currency that was far too strong, caused the economy growth to plunge into the red. Demands diminished and unemployment rate shot up, hitting all sectors hard. By the mid of 1985, Emporium Holdings, the biggest departmental chain in Singapore, had suffered a loss of $10 million. Banks and credit companies started to seek repayments from the troubled company. Two years later, the company was acquired by Malaysian tycoon Bill Ch’ng. In 1988, a 63-year-old Lim Tow Yong was declared a bankrupt.

Others would have given up but not Lim Tow Yong. With pure determination, he planned his comeback in the nineties with another departmental chain in Sabah, and later Brunei and Labuan. In 1999, Lim Tow Yong was finally discharged from bankruptcy. He sold his business in mid-2000s and became a millionaire once again at 79.

On 7 April 2012, the legendary former boss of Emporium Holdings, aged 87, passed away at the National University Hospital. He would be remembered for his generosity and inspired spirit by many of his former employees.