The Lone HDB Block at Moulmein

Posted on February 9, 2019 by Remember Singapore

Standing at the junction of Moulmein Road and Exit 7A of the Central Expressway (CTE), Block 69 cuts a lonely figure, being the only Housing and Development Board (HDB) flat in the vicinity. It was an unusual scene, as HDB flats are commonly built in clusters as part of a new town or housing estate.

When Block 69 was first built in the early seventies, the 20-storey point block stood tall among its neighbours, mostly made up of low-rise three-storey Singapore Improvement Trust (SIT) flats. Before the construction of the CTE in the mid-eighties that cut through the vicinity, Block 69 was situated at the corner between Moulmein Road and Norfolk Road; its nearest HDB neighbours were the flats located at Whampoa Drive (built in 1974), Cambridge Road (between 1976 and 1982) and Kent Road (1982).

Block 69 was put up for balloting a couple of months before its completion in 1972. It proved to be so popular that only 10% of the applicants were successful in getting their new flats. There were almost 700 applications received for the block’s 76 four-room units, each with a selling price of $15,500. The finalised figures of the allocation were: 15 units went to resettled residents, seven to HDB staffs, and the remaining 54 units were put up for sale to the public.

The chronological history of Block 69 hence began when its lease officially kicked off in July 1972. Moulmein Court became its immediate neighbour when the freehold condominium was erected beside it in 1981. By the late eighties, the CTE has isolated it from the Cambridge Road housing estate. In late 2018, the former Communicable Disease Centre (CDC), opposite the block, was closed to make way for future private residential development.

In 1999, Block 69 was left out of HDB’s Main Upgrading Programme (MUP), much to the displeasure of its residents. They appealed to their Member of Parliament (MP), and the outcast block was eventually included in the upgrading program. Subsequently, the block’s lifts were also upgraded in 2011 and 2016. 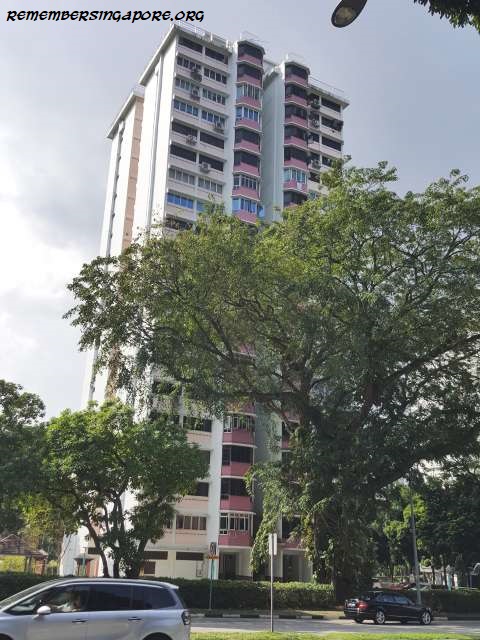 3 Responses to The Lone HDB Block at Moulmein