Water wells were once part of the essential amenities for the residents in Singapore. Its water supply was used by the villagers for cooking, drinking, washing and bathing purposes. It took more than four decades before they were totally replaced by piped and tap water supplies. A few, though, are still standing around, serving as a reminder of our difficult past.

The Last Water Wells in Singapore

The most famous well that still exists today is perhaps the century-old water well near Chinatown. Preserved but forgotten at the quiet Ann Siang Hill Park (established in 1993), the well was once one of the important water supply points in the late 19th century. Back then, there was limited fresh water for the residents of Chinatown. They had to regularly collect their water supplies from the bullock-drawn carts from several wells at Ann Siang Hill. This later gave rise to the name gu chia zhui (Bullock Cart Water). 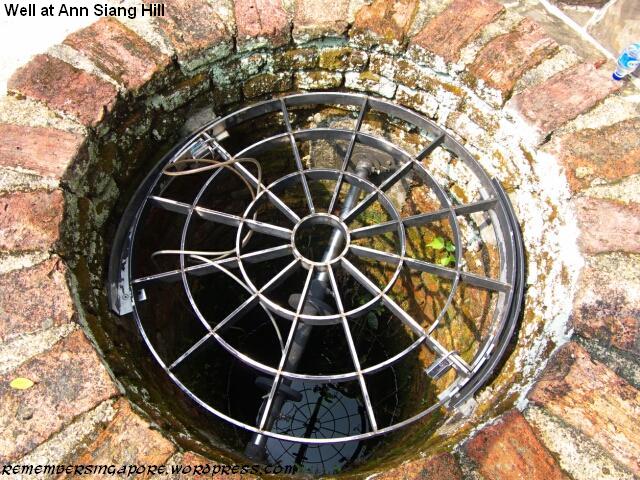 One of the water wells which the bullock carts drew water from was located near the junction of South Bridge Road and Neil Road. A nearby spring had its water flown into the well, and this later gave rise to the name of the road in that vicinity as Spring Street.

Another famous well is the one located at the Sembawang Hot Spring, which has its history dated back to the early 20th century. The well, as well as water pipes, could have been installed to tap the resources; a factory was also set up to manufacture bottled spring water. The facilities no longer exist today, except for the well that has seen the surrounding changes throughout the decades. 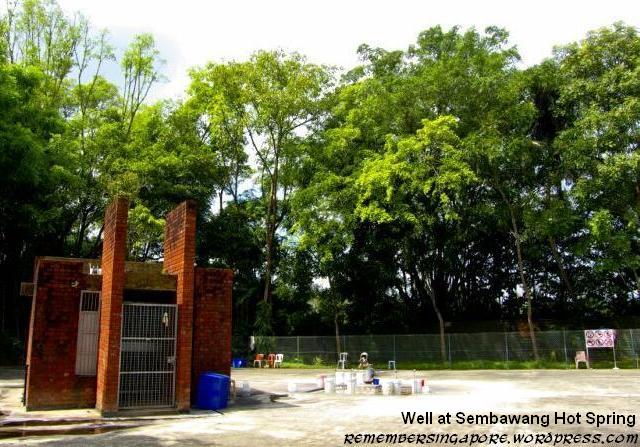 In 1985, the land where the hot spring and well were located was acquired by the government for the expansion of Sembawang Air Base. Today, the hot spring and well are opened to the public daily, although they remain under the ownership of Mindef. The historic well, over the years, has its fair share of rumours (of a child falling into it) and is now locked in a small red-bricked building. 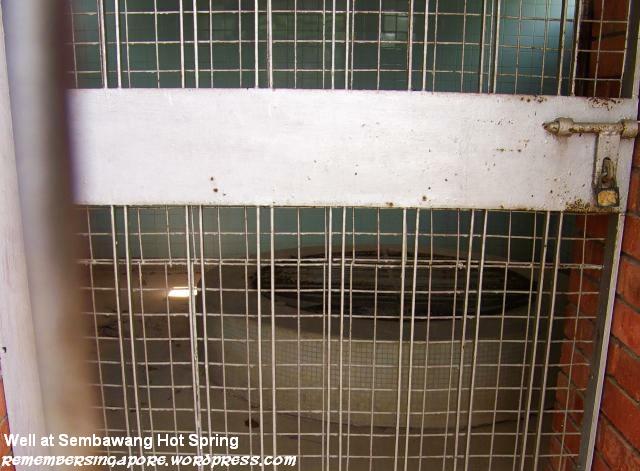 The third century-old well is located at Jalan Gelenggang, off Upper Thomson Road. It has been preserved and is part of a restaurant today.

A Popular Well at Upper Serangoon

It is not common in Singapore that an ordinary water well became a landmark or was well-remembered by the community.

The one at the former Upper Serangoon’s Somapah Village, though no longer existing today, had the glory to have its own commemorative plaque and replica installed at Hougang Street 21 since 2005. The well, fondly known as tua jia kar (Bottom of the Big Well), had been a good and consistent supply of clean water to the villagers, hawkers and and the nearby market. Although piped water were later installed at Somapah Serangoon Village, many villagers still preferred to draw water from tua jia kar.

By the seventies, tua jia kar had evolved to become a focal point for gatherings and communal activities for the villagers at Upper Serangoon. Its surroundings were bustling with staged Chinese wayang and people listening to tales told by storytellers. The well was later demolished due to the development of the vicinity, but its legacy remains fondly remembered by the Teochew community living at Upper Serangoon and Hougang.

A Brief Record of Wells, Reservoirs and Piped Water Supplies in Singapore

1868 – The first reservoir was constructed at Thomson Road. It was named MacRitchie Reservoir in 1922.

1904 – The High Service Reservoir was built at the top of Pearl’s Hill to supply water to Chinatown. It was later renamed as Pearl’s Hill Reservoir.

1910 – Kallang River Reservoir was built, and was renamed as Peirce Reservoir in 1922.

1920 – Seletar Reservoir was completed in the central catchment area.

1927 – The Municipal Commissioners of Singapore signed an agreement with Sultan Ibrahim of Johor for the supply of raw water from Gunong Pulai. 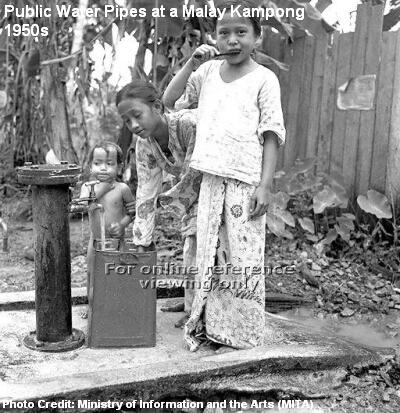 1952 – The Singapore City Council ruled that the polluted wells in areas fitted with piped water supplies must be closed. It was a decision that affected the livelihoods of many towgay (bean sprouts) farmers at Rochore, Kallang and Geylang areas who depended on the water wells.

1953 – Singapore Rural Board implemented a $200,000 scheme to install water mains at Changi, Loyang and Jurong so that thousands of rural residents relying solely on wells could have piped water supplies.

1959 – The British engineers embarked on a $400,000 project to bring piped water to Pulau Brani and Blakang Mati (Sentosa today). The undersea pipelines would provide fresh water to the hundreds of residents living on the two islands, who previously had to rely on rain and water boats for their water supply.

1963 – A prolong dry spell forced Singapore to endure its longest record of water rationing. A 12-hourly suspension of water supply was first implemented in April according to different district zones. The water rationing was later extended to the rest of the island, and lasted throughout the year.

1960s – The Rural and Urban Services Advisory Council implemented a water and electricity supply scheme at several kampong areas in Singapore, but they were subjected to the population density and the possibility of the installation of the amenities. Not all villages had enjoyed the benefits. Kampong San Teng, for instance, did not get its piped water supply until the late sixties. Some villages, especially those at the lesser accessible locations such as Jurong Road and Tanjong Kling, waited for more than a decade before they could get their piped water supplies.

1972 – The Public Utilities Board (PUB), established in 1963, started laying piped water supplies to villages such as the one at Jalan Kong Kuan, off Upper Bukit Timah Road. The projects, often costing as much as $18,000 each, were aimed to replace the usage of wells, whose water was easily polluted. During droughts, the wells were also dried up and residents had to fetch their water from the public standpipes situated far from their homes.

1976 -The government kicked off the Pulau Tekong Water Supply Scheme, which cost as much as $7.3 million and three years in the construction of water catchment areas, filters and storage plants on the outlying island. When the project was completed in 1979, the 4,000 residents living in Kampong Selabin, Kampong Pahang and Kampong Ladang on Pulau Tekong could finally give up their buckets, wells and the dependence on rains.

During the 1972 droughts, Pulau Tekong was hit especially hard as the wells on the island ran dry and the residents had to rely on PWD (Public Works Department) waterboats for their supply of fresh water. The cost of the water, at its peak, rose to as much as 20c per kerosine tin.

1981 – Four reservoirs were constructed at the western catchment area. They are the Murai, Poyan, Sarimbun and Tengeh Reservoirs.

2008 – The Marina Barrage became Singapore’s 15th reservoir upon its completion.

2011 – The PUB identified “Four National Taps” to increase the water supply in Singapore. These taps are the expanding of local catchment areas, importing water from Johor, NEWater and the desalination of seawater.

PS: This is an article extension from From Villages to Flats – The Kampong Days. Please feel free to contribute if you are aware of any water wells still existing in Singapore.