The World Cup Craze and Memories

Posted on June 8, 2014 by Remember Singapore

The World Cup is here again.

The biggest football tournament, held once every four years, is again expected to cause many sleepless nights among the local football fans. During Mexico ’86, the 10-year-old me always wondered why my father stayed up every night to watch some TV programs. By the time Italia ’90 was held, I was already a converted football fan and had joined my father in catching the biggest show on football scene, marvelling at the brilliant skills of Gary Lineker, Marco van Basten, Roberto Baggio, Rudi Voller, and of cos, Diego Maradona.

The World Cups on TVs

Since 1966, Singaporeans were able to catch the World Cups in black and white on the free-to-air Channel 5, broadcast by the Radio Television Singapura (RTS). Few had the luxury to watch at home though, since in the sixties, less than 5% of the Singapore’s population owned a television set.

In the seventies, imported brands such as Sharp and Telefunken cost as much as $3,000 per TV set, several times than that of the monthly salary of an average Singaporean. Setron, a local TV manufacturer established since 1965, was able to provide a cheaper alternative to Singaporeans with their TV prices tagged close to $1,800. 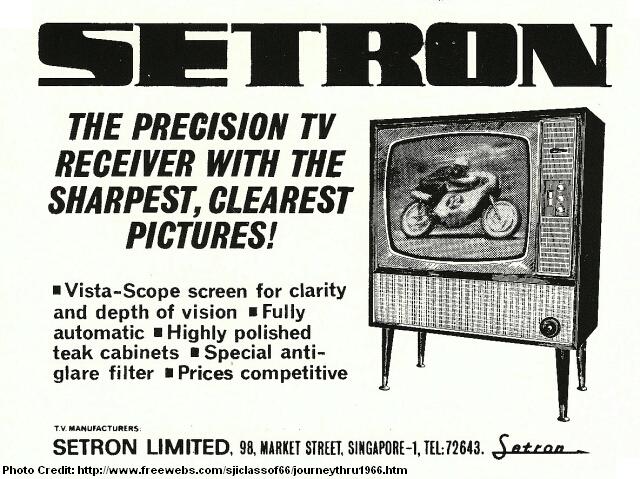 There was a breakthrough in early May 1974, when colour tests were run successfully just in time for the final of World Cup 1974 between Holland and West Germany. Hence, the first telecast of the World Cup in full colours would be presented via satellite to Singaporeans that year. When the news was out, more than 2,000 colour TVs were snapped up islandwide. Crowds also gathered outside Fitzpatrick’s Supermarket to catch the final live.

Singapore and the World Cups

Singapore did not have the chance to participate in the early World Cups. Southeast Asia was generally under colonial rule in the first half of the 20th century, although that did not stop Indonesia from becoming the first Asian country to participate in the World Cup 1938 when they travelled to France as Dutch East Indies. In Malaya and Singapore, the football associations were administrated by the British, and the biggest football event to the fans was the Malaya Cup. 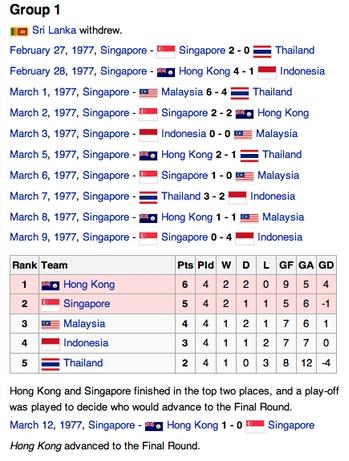 After its independence, Singapore remained inactive on the international stage, preferring to concentrate in the regional competitions such as the Asian Games, Malaysia Cup, Merdeka Cup, Ovaltine Cup, the King’s Cup in Thailand and the Merlion Cup.

It was not until 1977 when Singapore debuted in its first ever World Cup qualification games. The inauguration of the World Cup qualifying stage in the Asian zone took place in the new National Stadium, completed just three years earlier. Finishing second in the First Round qualifying group, Singapore met Hong Kong in the playoff for the Final Round, but was knocked out with a 1-0 defeat. Iran would later emerge as the winner of the Final Round to gain a berth at the 1978 World Cup at Argentina.

In 1998, former Prime Minister Goh Chok Tong, in his National Day Rally speech, visualised a dream for Singapore. That was to qualify for the World Cup finals in 2010. Citing the success of the French national team as the example, Goh Chok Tong emphasized on the importance of importing foreign sport talents to help raise the standard of the Singapore football.

The ambitious dream, which had initially excited the local football fans, came to an end when Singapore crashed out in the group stage with 2 wins and 4 losses in the 2010 World Cup Asian Qualifying Tournament.

Singapore did have one representative in the World Cup. It was not the national team but George Suppiah (1930-2012), the first Singaporean, and Asian, football referee to officiate in the World Cup finals. He was appointed as the man-in-charge of the first-round match between Poland and Haiti at the 1974 World Cup held in West Germany, and was also later selected as the linesman for the Sweden-Bulgaria and Brazil-Holland matches. A 25-year between 1953 and 1978 career saw him refereed a total of 43 international ‘A’ matches. 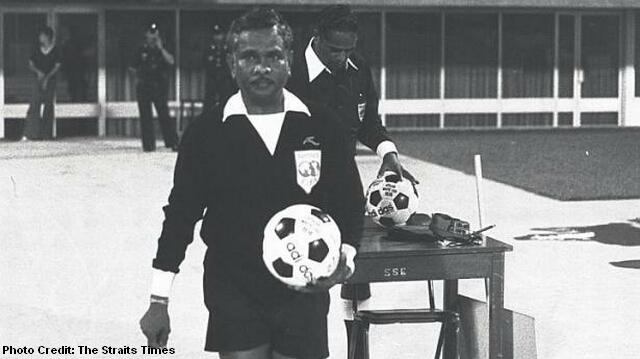 Many would perhaps remember the popularity of the Panini sticker collections sold in Singapore in the eighties and nineties. One of their legacies was the World Cup sticker albums, which served as memorabilia for football fans. Selling at $1 per packet of 5 stickers at the convenience stores, it was a craze back then among the students who bought the stickers with their pocket money and swapped among one another in the schools.

Today, Panini continues to launch their new series of the World Cup sticker albums, but its popularity in Singapore seems to have waned as compared to other countries. 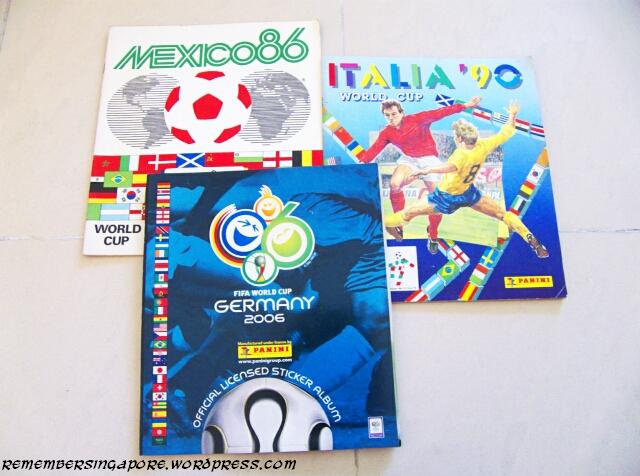 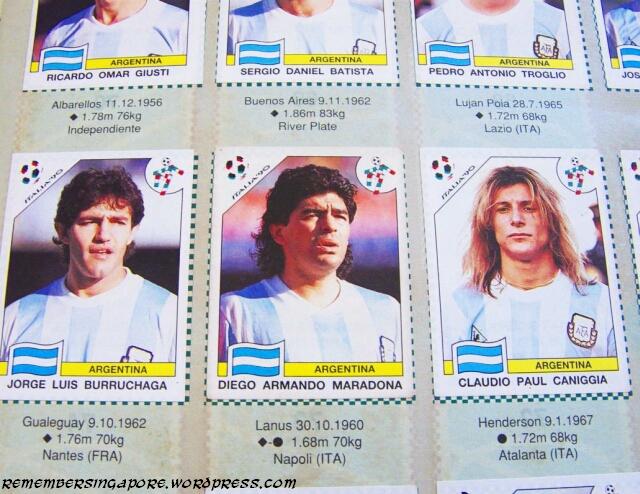 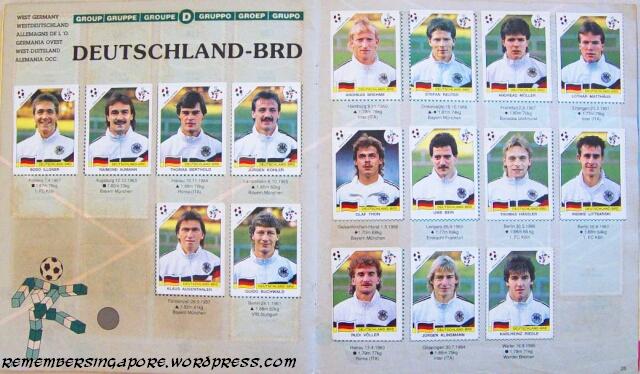 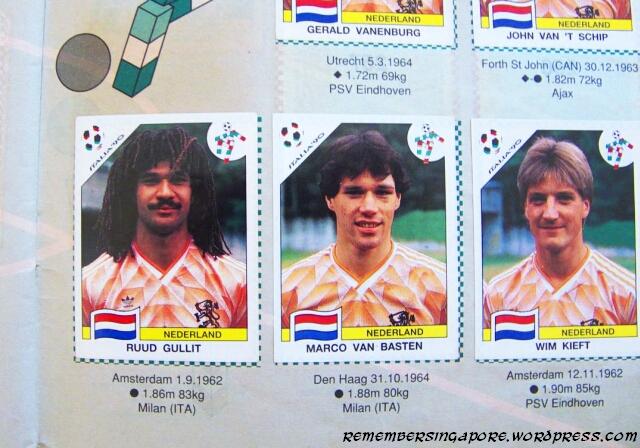 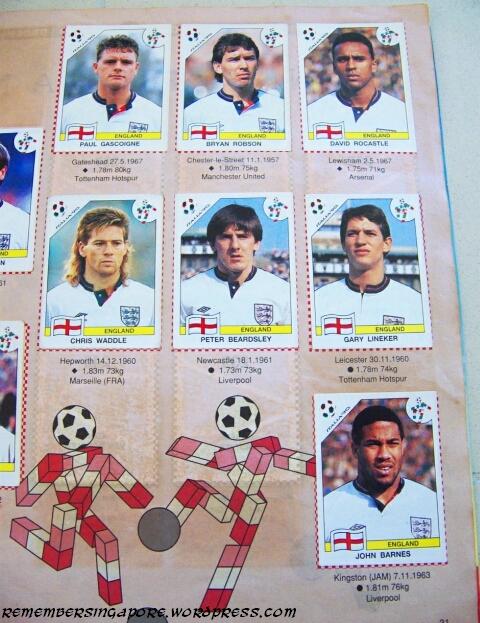 This will be the 7th World Cup I am watching. Will there ever be a chance in my lifetime to witness Singapore’s participation in the World Cup finals? Let’s certainly hope so.

9 Responses to The World Cup Craze and Memories