For almost two centuries, Raffles Place has been the designated business centre of Singapore. Under Sir Stamford Raffles’ Town Plan in 1822, the hilly area at the southern side of the Singapore River was leveled to fill up the nearby swamps. It became the Commercial Square, which was renamed in 1858 as Raffles Place. 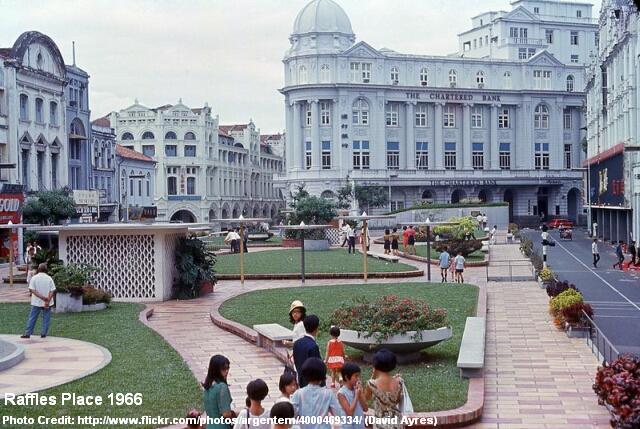 Despite the massive bombings during the Second World War, Raffles Place survived and quickly picked itself up again after the war as Singapore’s prime commercial district. It saw its biggest transformation in the past 50 years, where many of its old iconic buildings were rapidly replaced by modern skyscrapers.

Below are some of its best memorable landmarks that no longer exist today: 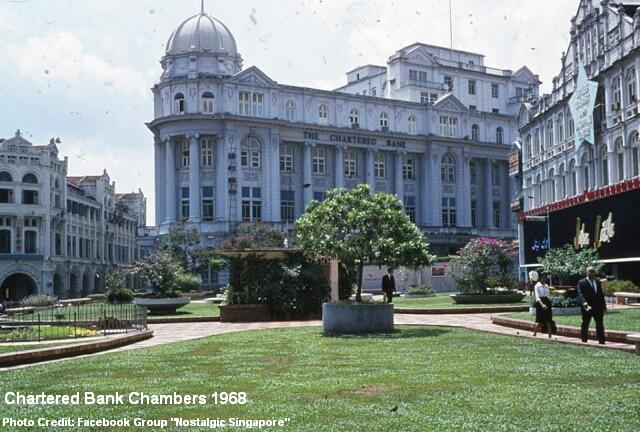 Along with the Mercantile Bank and Hong Kong & Shanghai Bank, the Chartered Bank was one of the earliest foreign banks to be established in Singapore in the mid-19th century. Between 1895 and 1904, the Chartered Bank was located at the corner of Battery Road and Flint Street. It was later shifted nearer to Bonham Street where the bank headquarters continues to operate today. 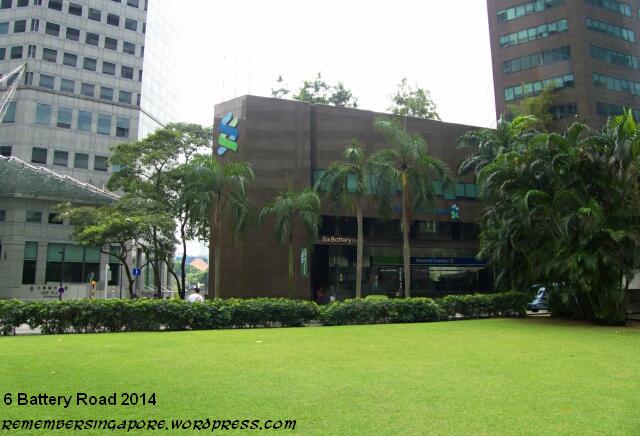 The Chartered Bank Chambers, with its striking dome, was demolished in 1981. In its place, a new Standard Chartered Bank building (known as 6 Battery Road today) was constructed and completed three years later, becoming a new landmark at Raffles Place with its towering 44-storey and 174m-tall design.

The 114-year-old Robinsons Department Store was another iconic landmark at Raffles Place, having established at Singapore’s prime commercial area since 1858. It survived the Great Depression and the multiple bombings by the Japanese during the Second World War, and even acquired its competitor John Little in 1955. But the great fire on 21 November 1972 ended Robinsons presence at Raffles Place.

The unfortunate disaster, caused by a short circuit, claimed a total of nine life; eight of them perished after being trapped in the lifts. Robinsons also suffered more than $20 million in losses, as its consumer goods packed ready for the coming Christmas period were all destroyed in the burning flames that could be seen as far as Jurong. 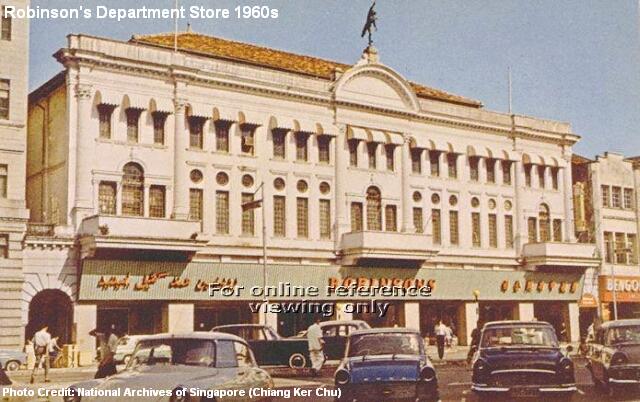 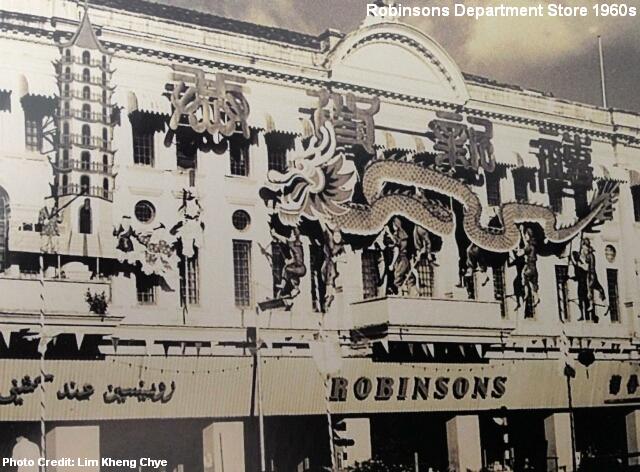 John Little, on the other hand, was established in the mid-19th century. By the 1920s, it had expanded to many major cities in Malaya. During the Second World War, the Japanese forces took over the four-storey signature John Little’s Building at Raffles Place, renaming it as Dimaru to serve the Japanese population in Singapore. After the war, John Little reopened for business and became popular as a “meeting place” for Indian and Chinese merchants from the nearby Market and Malacca Streets.

In 1955, John Little was bought over by Robinsons. Its building, once served as the office for the Singapore Tourist Promotion Board between 1964 and 1970, was torn down in 1973. During the eighties, the oldest department store in Singapore relocated its business to Orchard Road and, later, focused on the smaller retail markets at the heartlands. Its legacy at Raffles Place, however, remained till today as its Spanish-styled facade was used as the design of the entrances for the Raffles Place MRT Station.

Other major department stores such as Oriental Emporium also left, as Raffles Place was transformed into a pure financial centre. The gaps were filled up by other banks, which began to see the rise of the skyscrapers. In 1980, the 190m-tall Shell Tower (Singapore Land Tower today) was built near where John Little used to be, whereas at the former site of Robinsons Department Store, the 63-storey OUB Centre (One Raffles Place today) was completed in 1986 as the tallest building at Raffles Place.

The Alkaff Arcade and the Ocean Building 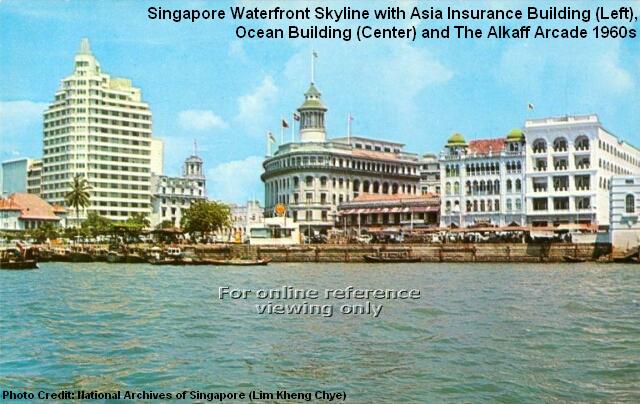 Well-known as a waterfront landmark at Raffles Place, The Arcade, representative of the Arab influence at the prime commercial belt, was built by the famous Alkaff family in 1909 as Singapore’s first indoor shopping centre. Designed by the Swan and MacLaren Architects, the four-level building possessed a distinctive Moorish style, featuring domes, arches and atrium.

By the seventies, The Alkaff Arcade was bustling with retail and commercial activities even though the building was in bad shape. In 1978, it was demolished and replaced by a new 17-storey retail-and-office tower, after the Alkaffs sold their prized asset to Singapura Developments in the early sixties for $20 million. 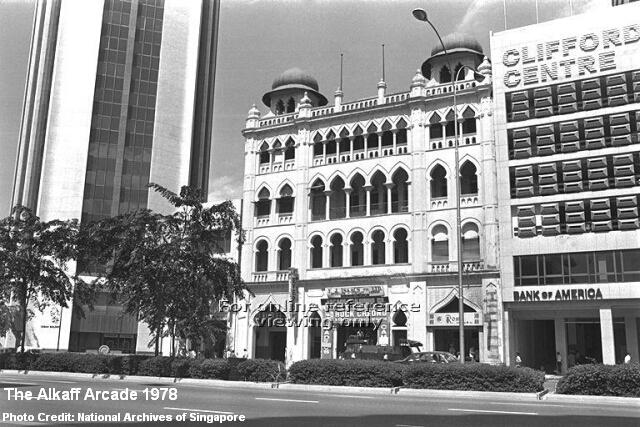 Standing beside The Alkaff Arcade was the Ocean Building. One of the oldest landmarks in Singapore, the first Ocean Building had made its presence at the then Commercial Square since 1864. Its second-generation existed between 1924 and 1970, and was well-known for its popular Prince Restaurant. The third Ocean Building was completed in 1974 in the form of a $70-million 28-storey office and shopping complex. Today, the Ocean Towers and Financial Centre, the fourth generation of its legacy, stand at its place.

Change Alley, a narrow lane between the Winchester House and Singapore Rubber House, was once famous for its money-changers, both legal and illegal, and rows of little retail stores. It had existed for a century as a hotspot of trading activities that involved everything from clothes and bags to toys and souvenirs. During its heydays, visitors had to squeeze their ways through the congested walkways for their bargain-hunting. 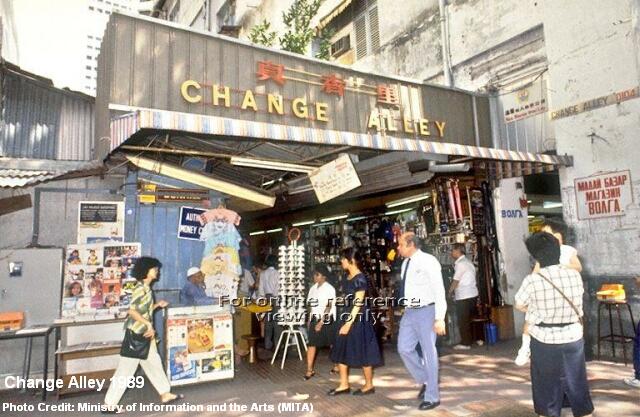 The Singapore Rubber House was a 15-storey landmark that faced the Collyer Quay. It was previously known as the Shell House, which started as a five-storey building since 1920. The Winchester House, on the other hand, was built in 1906.

By the late eighties, the businesses at Change Alley had dwindled rapidly due to the decreasing number of foreign sailors and military personnel visiting Singapore. In 1989, the buildings of the Winchester House and Singapore Rubber House were demolished, bringing along with them the permanent closure of the old Change Alley. 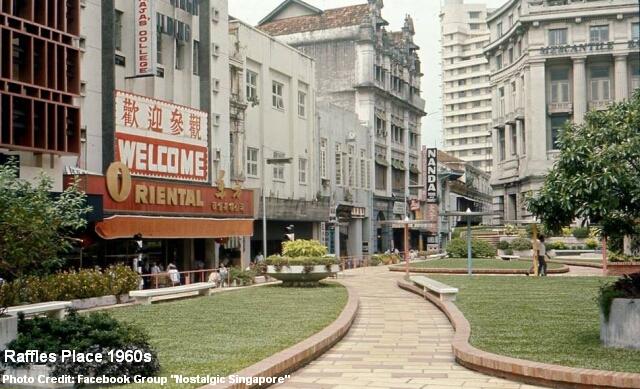 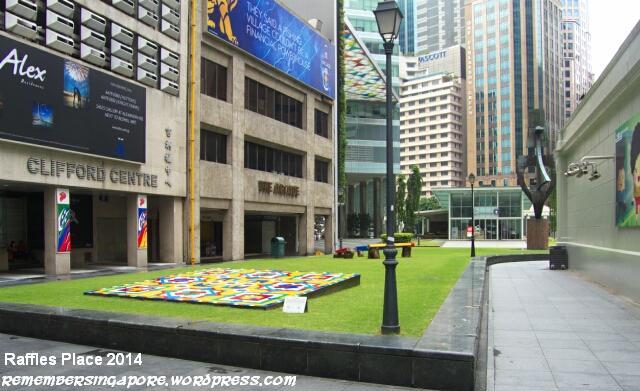 The magnificent grey building in front of The Arcade was the Mercantile Bank Chambers that stood between two streets of De Souza and D’Almeida. D’Almeida Street is still present today but De Souza Street was absorbed into the Ocean Financial Centre during its redevelopment in the late 2000s. The Mercantile Bank was first established in Singapore as early as 1855 under the name of “Mercantile Bank of India, London, and China”. 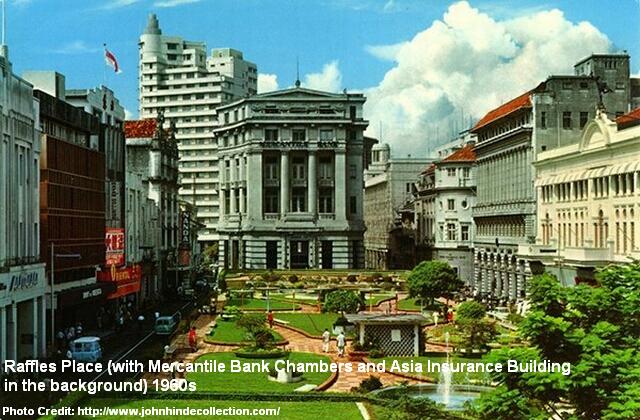 The former body of the Malayan Bank Chambers was the three-storey Whiteaways Laidlaw Building with its popular Whiteaways Department Store. In 1962, the building, then owned by the Malayan Banking Sdn Bhd, was refurbished with a distinctive facade, tapered-in windows and an addition of three storeys. It was torn down in 1999 to make way for the Maybank Building, a new 32-level office tower designed by SYL Architects.

The Hong Kong & Shanghai Bank had its roots in Singapore as early as 1877. It established its first office building at Fullerton Square between 1892 and 1919, before investing in a new Neo-Classical styled tower completed in 1925. The new building lasted more than 50 years until 1979 when it was demolished and replaced three years later by the 21-storey Hong Kong Bank Building (HSBC Building today).

Once the tallest landmark at Raffles Place for twenty years between 1954 and 1974, the Bank of China was first set up at Cecil Street in 1936, before moving to its present site at Battery Road in the early fifties. In 1999, its former record-breaking tower was replaced by a new 37-storey Bank of China Building. 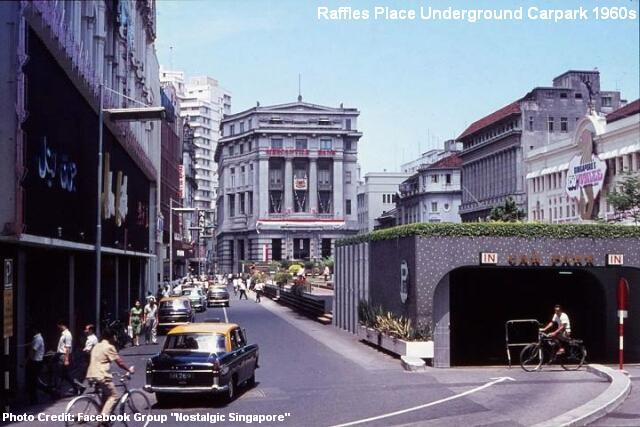 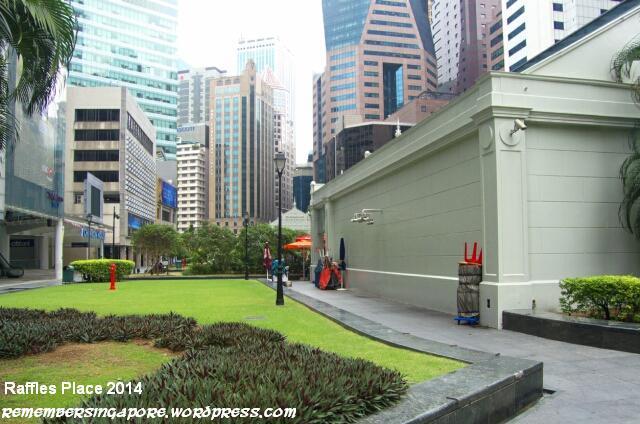 In November 1965, Singapore’s first ever underground carpark at Raffles Place was officially opened by former Prime Minister Lee Kuan Yew. Able to accommodate 250 cars, the new carpark was expected to relive the traffic and parking congesting at Raffles Place, where its previous slots could only cater for 113 vehicles. There was also an underground subway leading directly to the basement of Robinsons Department Store, a feature welcomed by late night shoppers. 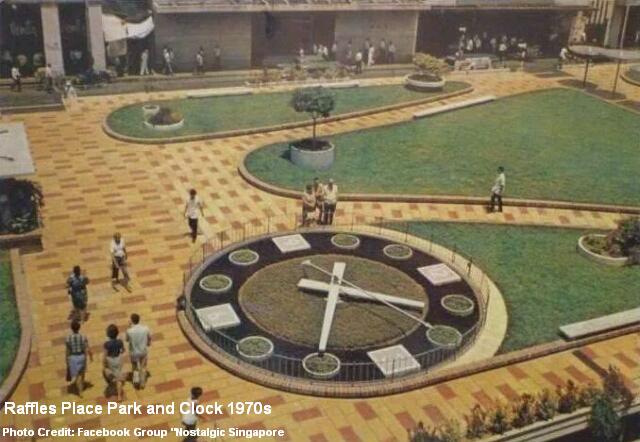 The underground carpark was demolished in the 1980s due to the construction of the Raffles Place MRT Station.

The 50-Year Chronology of the Prominent Landmarks at Raffles Place:

1962 – The Alkaff Arcade was sold to Singapura Developments for $20 million. 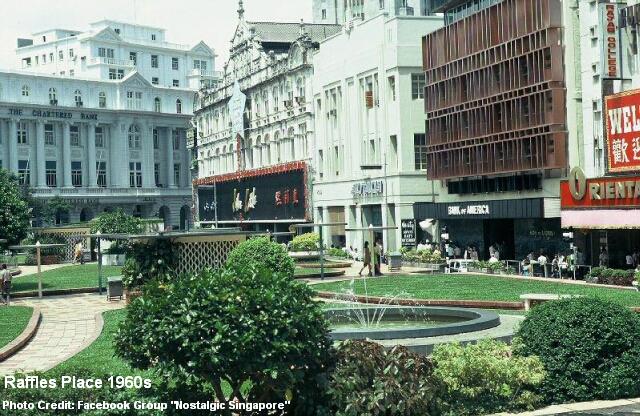 1970 – The Ocean Building was demolished.

1972 – Robinsons Department Store was destroyed in a fire.

1972 – The areas around Raffles Place Park was pedestrianised by the Public Works Department.

1973 – The John Little’s Building was demolished.

1974 – The Ocean Building was completed as a new third-generation 28-storey office and shopping tower.

1978 – The Alkaff Arcade was demolished. 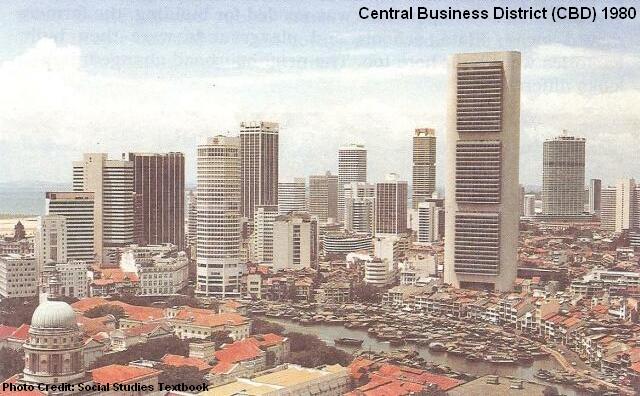 1981 – The Chartered Bank Building was demolished.

1984 – The Mercantile Bank Chambers was torn down due to the construction of Raffles Place MRT Station.

1984 – Tung Centre was completed at the former site of Maritime Building. 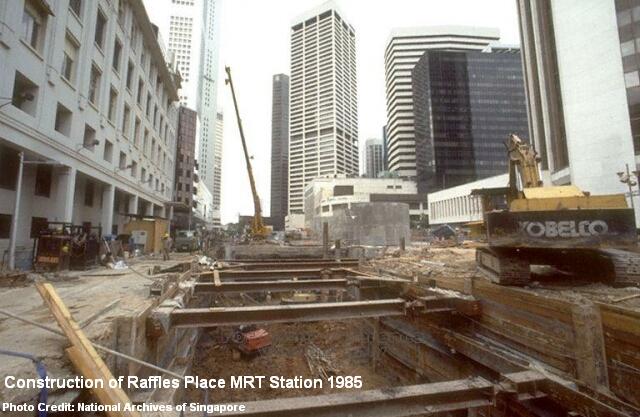 1986 – OUB Centre (One Raffles Place today) was completed at the former site of Robinson’s Department Store.

1989 – With the demolition of the Winchester House and Singapore Rubber House, Change Alley was shut down.

1992 – Hitachi Tower was built at the former sites of the Winchester House and Singapore Rubber House. 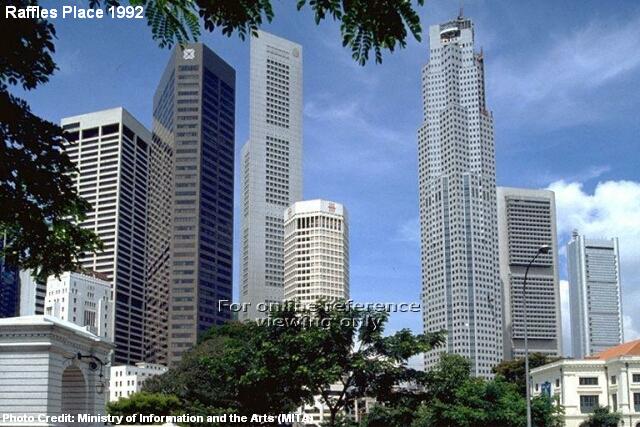 1995 – The Republic Plaza was the third building at Raffles Place with the height of 280m.

2006 – The 52-year-old Asia Insurance Building was bought over by the Ascott Group for $110 million, and renamed as Ascott Singapore.

2007 – The third-generation Ocean Building was demolished.

2011 – The Ocean Towers and Financial Centre was completed. 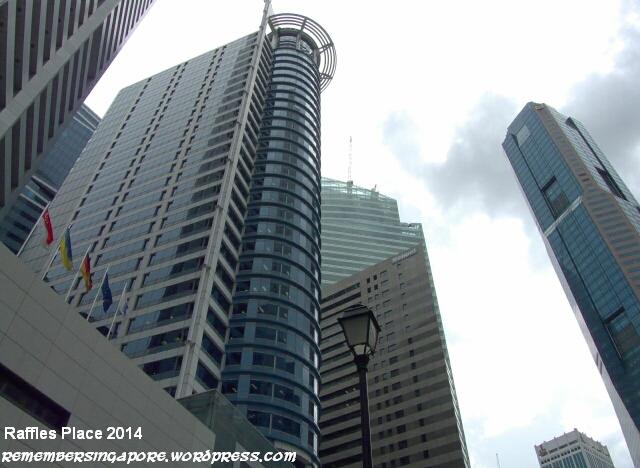 The Tallest Landmarks at Raffles Place: