Posted on August 22, 2014 by Remember Singapore

The early fires were mostly put out by policemen, sepoys, soldiers and even prisoners. In April 1869, a voluntary firefighting force was formed, but without proper training and equipment, the early brigade was proved to be inefficient in dealing with major fire disasters. 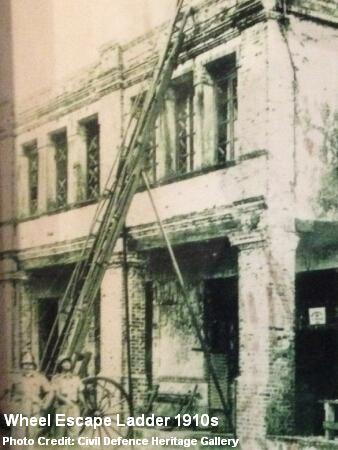 It was only until mid-1886, and after countless fires, when the proposal to hire firemen was approved. Two years later, the Singapore Fire Brigade was officially formed. With sufficient funding, fire stations were able to be established within the police quarters, equipped with horse-drawn steam fire engines.

A breakthrough for the Singapore Fire Brigade was the purchase of its first wheel escape ladder in 1908. Measuring 50 feet, the ladder was able to reach the highest window on a double-storey building. By the seventies, the Singapore Fire Brigade had a total of six wheel escape ladders, which were operationally ready until they were decommissioned in 1981.

Posted from England, Captain Montague William Pett was the first professional fireman in Singapore. He was appointed as the superintendent of the Singapore Fire Brigade between 1905 and 1912, and was given the task to modernise the force. One of Montague Pett’s contributions was to commission the building of the Central Fire Station to serve as the headquarters of his firefighting force. The fire station, also known as Hill Street Fire Station, was professionally designed with a training ground, engine house and a watch tower. It was officially opened in August 1909. 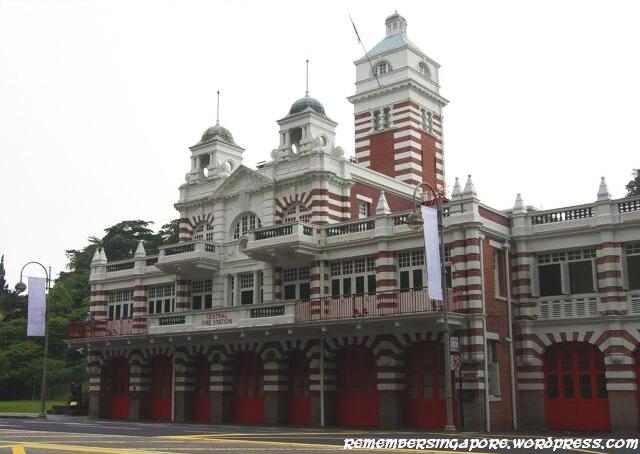 The Central Fire Station, however, was not the first fire station in Singapore. The Cross Street Fire Station had been the main station for the early firefighting force since 1891, and there were also the Beach Road Fire Station, which became operational two years later, and the Kallang Fire Station.

The Merryweather Fire King, one of the world’s best fire engines of its era, was introduced in Singapore in the early 20th century. It had been used by both London Fire Brigade and Penang Fire Brigade since 1905 and 1906 respectively. Fully motorised, it was equipped with a boiler that produced steam to drive the fire engine to the disaster site in a short period of time. 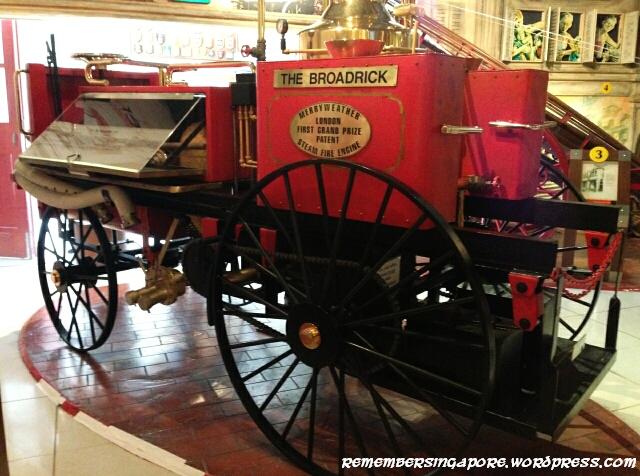 The Merryweather Fire Engine also allowed water to be pumped directly from a water source. The firemen could then use the high water pressure in their hoses to fight fire effectively.

The Singapore Fire Brigade acquired two Major Pump Three before the Second World War, and added one more in 1947. Produced in the 1930s, the Major Pump Three, also known as Dennis Fire Tender, was capable of efficient firefighting and rescue missions with its 450/500 Dennis turbine and 16m escape ladder. During the operations, the driver and the officer-in-charge would sit in the front seats of the open-concept vehicle, while the rest of the firemen had to stand on the side platforms, clinging tightly onto the ladder. 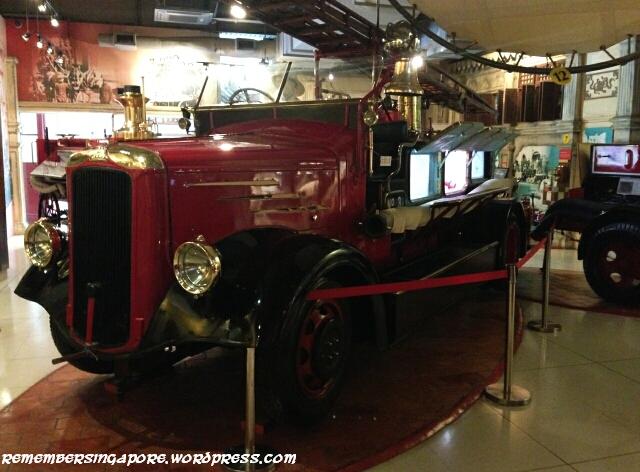 The Major Pump Three fire engines were put to test during the Bukit Ho Swee Fire in 1961. They continued to be used by the Singapore Fire Brigade until the seventies. Only one such model remains today, where it is being put on display at the SCDF Heritage Gallery.

The Dennis Pump Escape was bought by the Singapore Fire Brigade in 1951 as part of an upgrade to their firefighting equipment. Fitted with a better engine, the Dennis Pump Escape also ensured the personal safety of the firemen, who could now sit inside the fire engine instead of clinging onto the side rails. 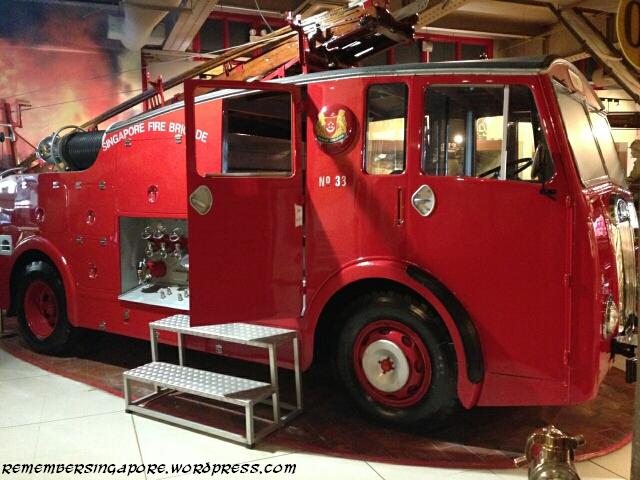 The Dennis Pump Escape served for a total of 28 years in the force, before it was retired in 1979.

Tragedy struck Kampong Koo Chye at Lorong 1 and 3 of Geylang Road on 5 April 1958, when a raging fire swept across the kampong made up of wooden and attap houses. Six lives were lost, before the firemen were able to keep the fire under control.

The disaster led to the formation of kampong firefighting parties made up of volunteers. Each party was made up of 20 young men who were given proper trainings by the fire brigade. The fire brigade would visit various kampongs in their fire engines to educate the residents on fire safety. The exercise proved to be successful. Instead of grabbing their possessions and running away, more kampong residents and the firefighting parties were able to quickly deal with small fire outbreaks before they got out of control.

Tiong Bahru had been plagued by fires between the 1930s and 1950s. A major one hit the kampongs at Tiong Bahru in February 1959, causing 12,000 residents to lose their home. The total loss was estimated to be $2 million.

The notorious Bukit Ho Swee Fire, the worst fire disaster in the history of Singapore, broke out in the afternoon of Hari Raya Haji on 25 May 1961. Believed to have started near the King’s Cinema at Tiong Bahru, the fire, fanned by strong winds, spread rapidly through Bukit Ho Swee to Havelock Road and the Delta area. Rows of attap houses, sawmills and workshops were destroyed, and explosions were heard from the oil and petrol containers in the nearby warehouses. 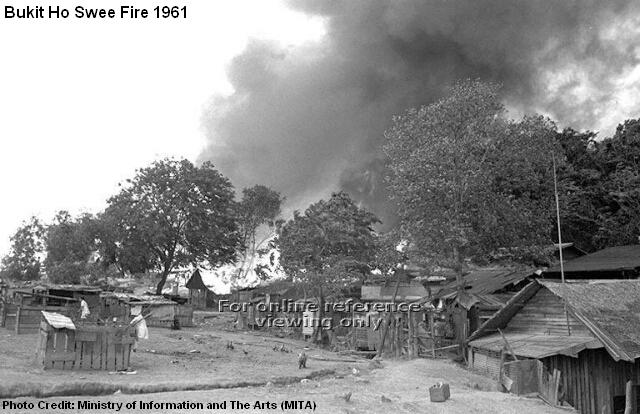 A record 22 fire engines were activated, but by 8pm, the fire was still burning strongly. By the time it was put out, the fire had destroyed more than 100 acres of squatter settlement, claiming four victims and leaving 16,000 homeless. Several years later, on 24 November 1968, Bukit Ho Swee was devastated by another big fire. This time, 3,000 residents’ homes in another squatter settlement at Bukit Ho Swee were burnt down. 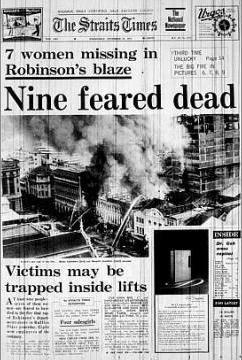 On 21 November 1972, a large fire, caused by an electrical short circuit, engulfed Robinsons Department Store at Raffles Place. A total of nine people perished in the fire, and more than $20 million’s worth of consumer products were destroyed in flames that could be seen as far as Jurong. The disaster also ended Robinsons’ 114-year presence at Singapore’s prime district.

In late 1978, the Liberian-registered vessel named Sypros arrived at the Jurong shipyard for repairs. A spark from the cutting torch caused the ship’s contaminated fuel tank to explode, turning the engine room into an inferno. 76 lives were lost; many of them were burnt to death. The Sypros tragedy later led to the aggressive campaigns for safety in the shipbuilding industry.

Struck by a bolt of lightning in the wee morning of 18 April 1981, the roof of an oil tank at Pulau Bukom was ignited with fires burning more than 15 hours. More than 100 firemen from the Singapore Fire Service were rushed to the scene to battle against the spreading flames. 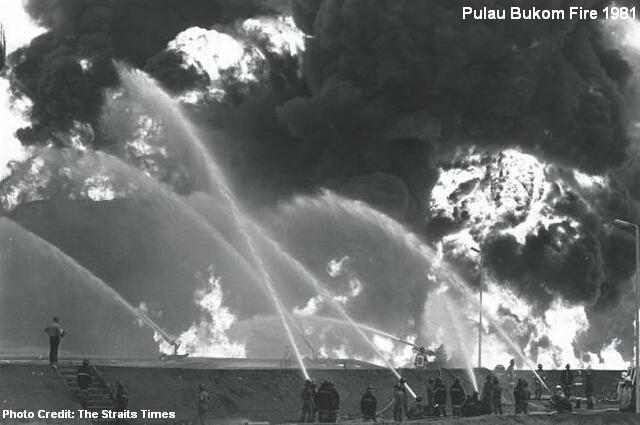 In the island’s first ever major fire, a two-storey youth hostel on Sentosa was partially destroyed on 24 October 1982. Flames quickly fanned through rooms filled with beds and furniture, as 70 rangers battled the fire for almost 90 minutes.

An arsonist burnt down two shophouses at Woodlands Town Centre on 15 December 1984, causing the death of 10 people. Most of the victims, aged between 15 and 70, died of asphyxiation. It was the worst fire case in Singapore since 1972, when the Robinson Department Store fire claimed a total of nine lives.

A fire had broke out on Pulau Merlimau oil refinery on 16 August 1984. Four years later on 25 October 1988, the storage tanks on the Southern island caught fire again. It went on to become Singapore’s worst offshore fire disaster. Lasting more than six day, the fire sent numerous tanks filled with naphtha into flames and smoke. The Pulau Merlimau fire resulted in 25 injuries and $15 million in losses, and thick clouds of polluted air and soot covered the western part of Singapore for days. 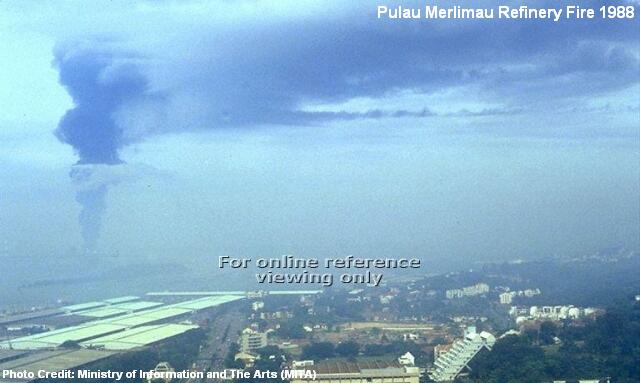 Another flash fire hit a tanker at Jurong shipyard on 8 February 1994, killing eight and injuring three.

One of Singapore’s worst chemical fires occurred on 22 May 1997. Chemical treatment plant Chemsolv Technologies, located at Tuas, was hit by a fire that found it way to the highly flammable waste chemicals stored in drums and containers. The firemen took more than four hours to control the blaze. Two were injured and more than 500 workers were evacuated.

The popular but now-demolished Seletar Market was almost destroyed by a big fire on 28 July 2000. 84 stalls were destroyed, and the hawkers had to be relocated at makeshift stalls nearby. The new Seletar Market was completed in the following year at a cost of $750,000, but was eventually torn down at the end of 2004. 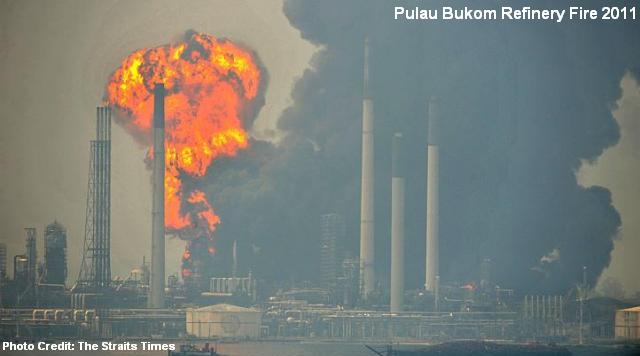 Burning for 32 hours and resulting in a total loss of $187 million, the fire that struck Shell’s refinery at Pulau Bukom on 28 September 2011 was the worst refinery fire since 1988. More than 100 firefighters were activated to control the situation. It would take three months before Shell’s refinery was able to resume to full production. 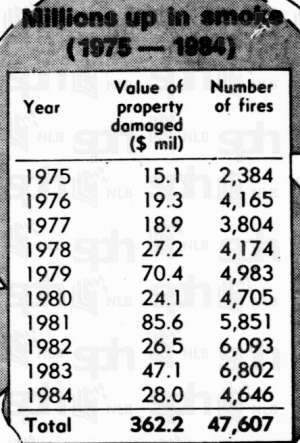 The most common causes of the fire outbreaks were accidents, arsonists and vandalism, with the manufacturing sector bearing much of the brunt of the damages.

The year 1983 fared the worst, according to the Department of Statistics figures. There were 6,802 fire cases, leading to $47.1 million worth of property destroyed, many of them belonged to manufactured goods and properties of residences, warehouses and storage buildings.

995, the emergency number that most Singaporeans are familiar today, was introduced in 1984, replacing the older versions of 5555, 328111 and 3378111. In 1991, the first Public Warning System (PWS) were tested and installed. Today, the system covers more than 2,000 strategic locations on the island.

Alexandra Fire Station was officially opened by the Governor of Singapore Sir John Nicoll on 25 February 1954. Constructed at a cost of $1.5 million, it was then the largest fire station in Eastern Asia. Located near Rumah Bomba Circus, the former round-about between Alexandra Road and Queensway, the fire station’s main mission was to serve Singapore’s first satellite town in Queenstown, Pasir Panjang and the west coast of the country.

Alexandra Fire Station boasted a 164-feet high watch tower, 62 feet taller than the iconic tower at the Central Fire Station. One of the station’s most difficult operations was the battle against the Bukit Ho Swee fire in 1961. Serving for almost 50 years, the aging premises of the former Alexandra Fire Station was eventually demolished in 2003.

The fourth fire station in Singapore, the Bukit Timah Fire Station was built two years after the completion of the Alexandra Fire Station. Standing at the junction of Upper Bukit Timah Road and Old Jurong Road for five decades, it had become an iconic landmark in the vicinity with its distinctive red doors and watch tower. There were also several blocks of staff quarters standing beside the main station. 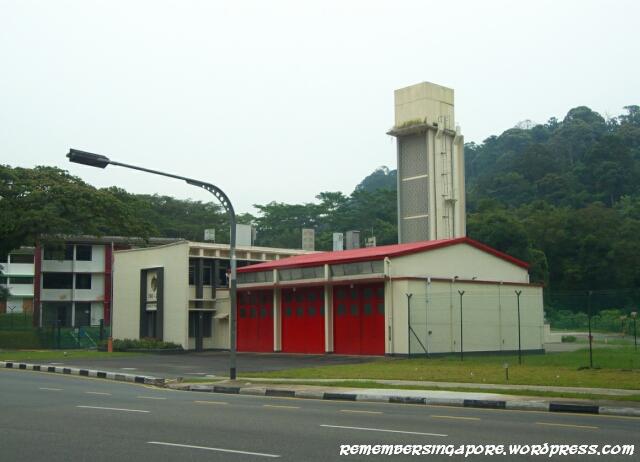 In 2005, the fire station was closed permanently; its role was taken over by the 4th Civil Defence Division housed in the new Bukit Batok Fire Station at Bukit Batok Road. The premises is currently converted into a restaurant.

Before the ceasing of its operation, the Geylang Fire Station was the second oldest fire station in Singapore after the Central Fire Station. It was opened in 1929, and served a total of 73 years at the junction of Paya Lebar Road and Sims Avenue. 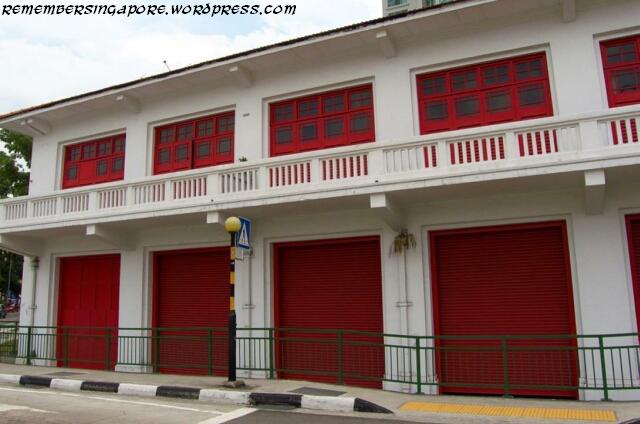 After 2002, the duties of the Geylang Fire Station were reassigned to the Paya Lebar Fire Station, who also serves as the headquarters of SCDF. The premises of the former fire station was given the conservation status is 2007. 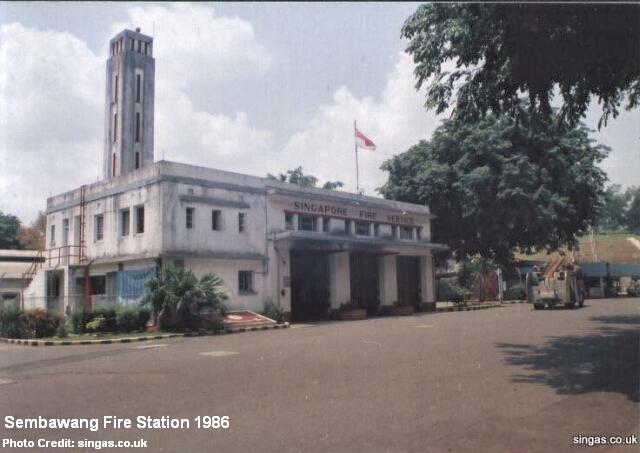 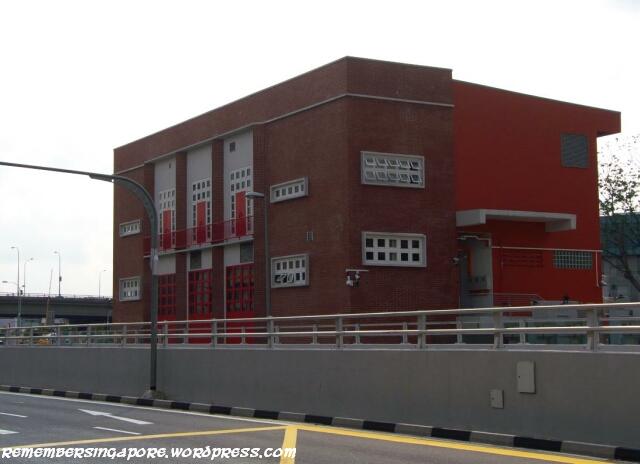 The restructuring of the organisation ensured that the SCDF’s operational coverage was extended to the residential, commercial and industrial areas at Bishan and Thomson.