Transit Road – A Transition from Retro Shops to New Condos

Many former National Servicemen who did their BMTs (Basic Military Trainings) at Nee Soon Camp would remember Transit Road, the short link between the army camp and the main Sembawang Road.

Despite the limited space, Transit Road used to house a row of shops that sold a wide variety of products from military apparels to electronic appliances. It used to served Nee Soon Village too, which was located a stone’s throw away at the junction of Mandai and Sembawang Roads, until the late eighties.

Records show that shops had been plying their trades at Transit Road since 1945. After the war, many locals opened shops at Transit Road to provide delivery and courier services for the British servicemen stationed at Nee Soon Camp, who would send food and gift parcels back to their families at Britain, often on a weekly basis.

Brands and names of shops that had operated at Transit Road in the past six decades might ring a bell to some, including Nee Soon Bar, Yong Lee Provision Shop and Lucky Store to Paris Silk Store, Hock Gift Shop, Rambo Gift Shop and Danny Tattoo, the last batch of shops before the premises were demolished.

Clusters of attap and wooden huts used to exist behind the shophouses in the seventies, where they housed many families. The vicinity was prone to fire hazards, and were hit by several fire accidents that affected the livelihoods of many residents and shopkeepers in the seventies and eighties.

A large fire broke out on an early morning in June 1977, sweeping through the shops and huts rapidly. The fire engines only arrived 30 minutes later. More than $1 million worth of goods and properties were destroyed, and at least 12 families were rendered homeless. In mid-1985, another fire burned down a bookshop and two tailor shops at Transit Road. $30,000 worth of goods had gone up in flames; the old bookshop, operating since the sixties, never did recover after the incident. 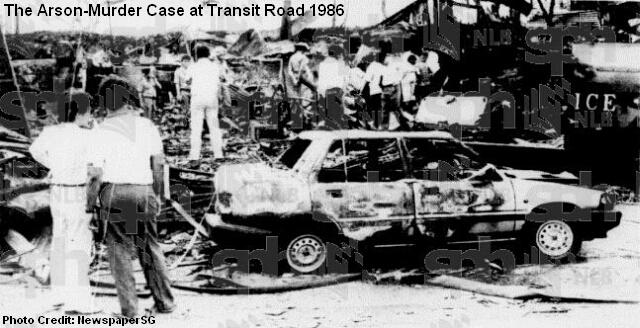 A Case Within a Case

In 1986, Transit Road again appeared in the headlines when six shops were consumed by a raging fire that cost damages of almost $1 million. Two men died in the fire; the case was classified by the police as arson-murder.

Forensic tests and police investigations were conducted; the results showed that the two victims might be the ones committing the arson, but they themselves were trapped and killed by the engulfing flames. It was later discovered that the owners of London Bazaar, an electronic shop at Transit Road, had hired the two men to burn down their shop in order to cheat the insurance company for $330,000. The owners were eventually sentenced to three years’ imprisonment in 1988.

In the late eighties, perhaps thanks to marketing, Transit Road was dubbed by the media as a mini Orchard Road. The dozen shops received roaring businesses from many New Zealanders and Australians who were the former servicemen at Singapore’s military bases. The competitive prices offered for goods such as electronics, luggage, toys and sport gears also lured the tourists to Transit Road, which had its shophouses refurbished after the disastrous fire in 1986.

Comparing to the “official” shopping belt at Orchard, the shops at Transit Road offered prices of their products at 20% or more cheaper. In addition, the vicinity had hassle-free parking and low pressure “country-style selling”. Besides the tourists, the SAF (Singapore Army Forces) soldiers from the nearby Nee Soon and Kahtib Camps, and residents from neighbouring estates such as Seletar Hills also provided sufficient crowds to keep the shops busy seven days a week.

The hype soon faded in the nineties, but the shops still enjoyed businesses from the NSFs who served their BMTs at Nee Soon Camp. This changed in the late nineties, when the new SAF BMTC (Basic Military Training Centre) was opened at Pulau Tekong. All newly enlisted recruits were no longer trained at Nee Soon Camp; the crowds passing through Transit Road became considerably reduced.

Like the Beach Road Army Market, the gift shops at Transit Road, selling mostly military supplies and apparels, saw their businesses declined since SAF introduced the concept of eMarts and their credit system in 1997. The electrical appliance-selling Lucky Store was the oldest shop in the vicinity, having operating at Transit Road since 1948. Danny Tattoo Art, another old name, was in the business since the seventies.

The former kopitiam, located at the end of the row of shops, had already been demolished and replaced in 2004 by the Forest Hills Condominium. A decade later, at the end of April 2015, the Transit Road shops will face the exact fate. It has been the same story for many old places elsewhere in Singapore, where they were torn down for private residential projects. This has become an increasing and worrying trend especially in the recent years.