One by one, the good old (or bad, depending on your memories) cinemas of the eighties and nineties have closed down; their sites redeveloped or demolished. Bedok once had four cinemas – Bedok, Changi, Liwagu and Princess/Raja – at its town centre and within walking distances from the old Bedok Bus Interchange.

After their respective closures in the late nineties and 2000s, Changi and Bedok Cinemas were demolished and their sites redeveloped into the new shopping mall Bedok Point, whereas the building of the former Liwagu Cinema was first taken over by Geylang United Football Club and later used as a church premises for Bethesda Community.

By the late 2000s, the last old Bedok cinema standing was Princess, but even then it could not escape its eventual fate of closure. After screening Chinese movie Painted Skin in September 2008, Princess Theatre officially walked into history.

Princess was once a common name for cinemas and theatres. In the sixties and seventies, there were Princess Theatres at London, United Kingdom, as well as Kampar and Sungei Siput at Perak, Malaysia.

Bedok’s Princess Theatre began as Princess/Raja that was officially opened on 11 February 1983. It featured a dual screen cinema at the 1200-seat Princess Hall and 800-seat Raja Hall. In the eighties, the Princess Cinema was mainly used to show Chinese blockbusters while Raja Cinema screened a mixture of Chinese, English, Malay and Indian films.

The Malay movies, in particular, were popular among the large Malay communities living at the eastern side of Singapore. In 1990, Indonesian film Isabella stirred up some interest – a 10-second kissing scene between the male and female leads had been censored – when it was screened at Princess/Raja.

In 1995, after a year of renovation, the Princess/Raja Cinema was converted into a three-screen cinema and became known as Princess Theatre. The original cinema hall of Princess was split into the smaller Princess 1 and Princess 2, whereas Raja hall was refurbished to become Princess 3.

Movie goers of Princess Theatre in the nineties would remember that the cinema, by then, had relatively poorer amenities compared to the newer cinemas in the city area. The seats were cramped and squeaky, never mind that some were even broken due to lack of maintenance and had been left unattended for years.

If there was something positive about the cinema, it was the movie ticket prices, relatively cheap by the standards then. Weekday movie ticket prices were charged at $5, while watching a movie at Princess during weekends cost $7 each. Another “positive” thing was the cinema’s lax regulations. Outside food and drinks could be dabao (packeted) into the cinema halls for consumption. Hence, it was not uncommon to see some movie goers eating their favourite McDonald’s burgers or even Hokkien mee while watching the movies.

Things got unruly in the eighties and nineties, when the cinema premises became a favourite haunting place for teenage gangs and school dropouts in the Bedok neighbourhood. Fights and extortion occurred occasionally. In 1983, a robber gang overpowered the cinema’s watchman and got away with tens of thousands of dollars from the manager’s office. In 1997, the Bedok residents were shocked when a 14-year-old boy was killed by a youth in a fight at the cinema lobby.

After its closure in 2008, the cinema building was leased out to be used as recreational club, karaoke bar, LAN game shop and billiard saloon. McDonald’s, the longtime tenant at Princess Theatre, lasted another eight years until 2016.

The same year also saw Princess Theatre, previously owned by OCCB International, being mentioned in the news as a potential redevelopment target. True enough, it was redeveloped, and completed in 2018, as the new Djitsun Mall, a Golden Village cineplex equipped with six screens and 600 seats. After a 10-year gap, the Bedok residents can enjoy a movie in a cinema in their neighbourhood once again. 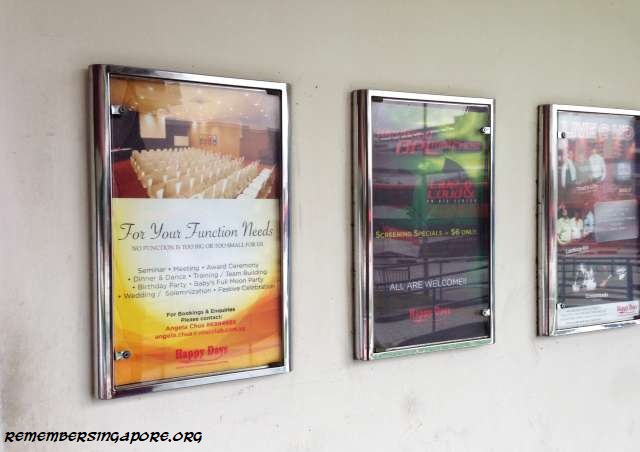 25 years of blockbusters, kungfu flicks, comedies and horror movies at the former Princess and Raja cinemas had become nostalgic recollections for the Bedok residents. It is now replaced by the new cineplex, which will provide another set of memories perhaps 20 or 30 years later.

1 Response to Memories of Bedok’s Princess