Searching for the Remaining Old Flood Gauges in Singapore

Located at the junction of Cambridge Road and Carlisle Road, this old one-metre flood gauge serves as a reminder of the frequent floods that occurred in this vicinity especially in the seventies. Such flood gauges were installed at many low-lying areas in Singapore in the past, as a means to record the depths of the waters and the severity of the floods. Not many are left standing today.

Another one can be found along Commonwealth Avenue, near the MRT station, but its wooden frame and markings are in relatively poor conditions as compared to the Cambridge Road one.

There is also an old flood gauge located along the canal at Kampong Lorong Buangkok. 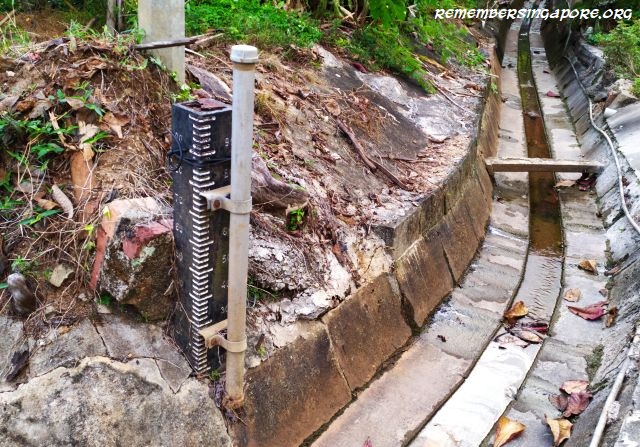 In tropical Singapore, rainfall is plentiful and thunderstorms are common. On average, it rains 167 days a year (a rainy day is defined when the total daily rainfall reaches at least 0.2mm), with Novembers and Decembers receiving the largest amount of rainfall. According to the National Environment Agency (NEA), between 1981 and 2020, the annual rainfall in Singapore averaged 2166mm.

For example, one of the worst floods in Singapore’s history occurred on 11 December 1969, a Hari Raya holiday. Incessant heavy rains led to many parts of Singapore to become severely flooded, with water depths almost at the waist’s level. Electricity and telephone lines were cut, whereas farms were drowned and poultry swept away. There were several deaths, caused by the landslides and fallen trees.

The government launched Operation Rehabilitation, made up of food distributions, rent subsidies and other aids to the affected residents and farmers to help them resume their lives and work back to normal. Major clean-ups were also carried out to remove piles of debris accumulated during the floods.

Another flood disaster happened on the early morning of 7 September 1974. Three hours of torrential rain led to a 38mm accumulation of rainfall, recorded by the Paya Lebar meteorological station.

The low-lying Jalan Besar and Rochor areas were hit badly – at one stage, the floods there were almost 2 feet (61cm) deep. Many houses at Cambridge Road, Geylang Serai and Bukit Timah were flooded, forcing their residents to move out temporarily. Hundreds of cars at the downtown and city areas were stranded, with huge traffic jams reported during the morning peak hours.

In December 1978, thunderstorms again caused disastrous flooding at the areas from Bishan to Potong Pasir. This time, the floods claimed seven lives, thousands of pigs and poultry and destroyed large areas of farms and crops. 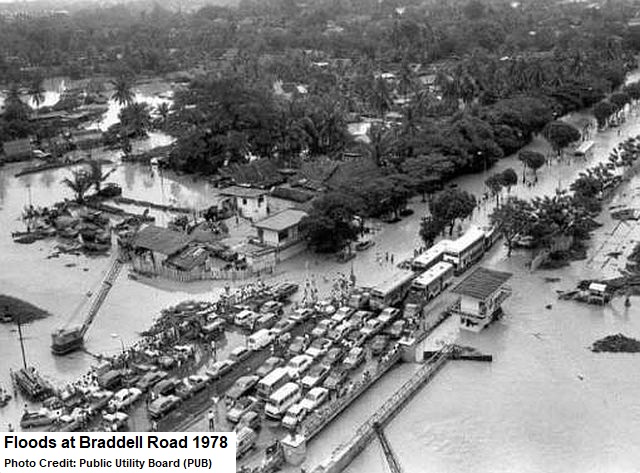 Since the early seventies, almost $2 billion had been invested to improve Singapore’s drainage infrastructure. A drainage master plan was drawn in the mid-seventies by the Ministry of Environment. Major diversion canals were constructed. A large canal, for instance, was constructed at Ulu Pandan in 1970 as part of the anti-flood scheme. New towns and housing estates developed in the seventies were also designed with better drainage networks. By the late eighties, things had significantly improved.

Further enhancements were carried out after 2000. The Marina Barrage, opened in 2008, is equipped with pumps to flush out the water into the sea during thunderstorms. In many of newer buildings, detention tanks and retention ponds were also installed to slow down the flow of water, hence preventing the overloading of the drainage network within a short period of time.

The Public Utility Board (PUB) has also installed water level sensors and CCTVs at numerous canals and drains, providing the public with quick updates of possible flash floods. Today, flash floods still occur due to sudden surge of rainfalls, but the waters tend to subside quickly. These new advanced devices are a stark contrast as compared to the old flood gauges that were once found in the different parts of Singapore.