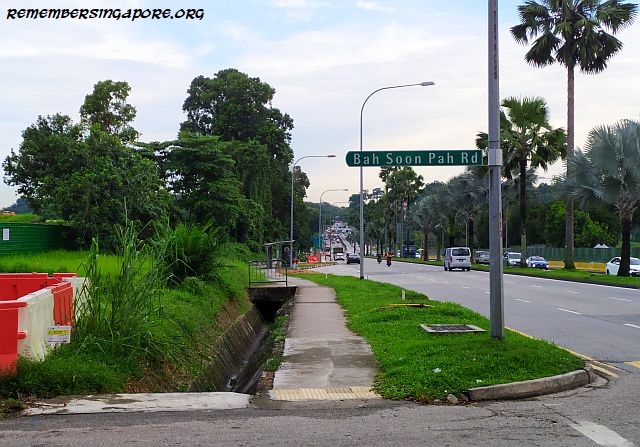 The rustic nature of Bah Soon Pah Road may soon be no more. The area has been marked for residential development, as an extension of the Khatib housing estate, in the Urban Redevelopment Authority (URA) Master Plan. Sembawang Road, where Bah Soon Pah Road is linked, will also be part of the route for the up and coming North-South Expressway.

Bah Soon Pah Road has been home to many plant nurseries in the past decade. With the impending expiry of their leases, most of them have already moved out by March and April 2022. The area is now waiting for the redevelopment project to commence. 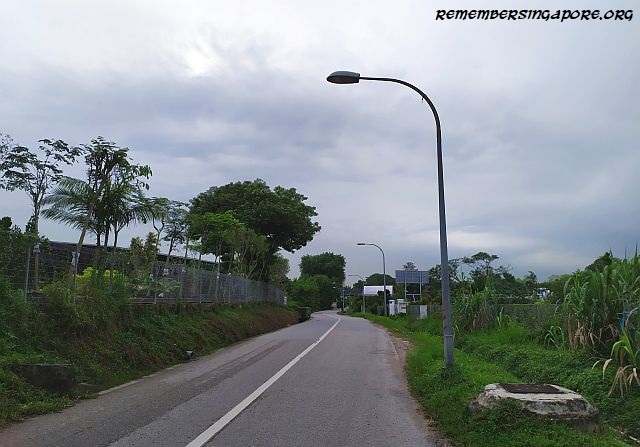 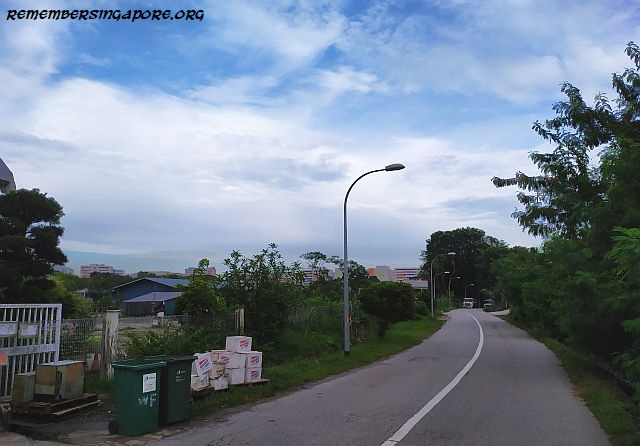 The Bah Soon Pah area was acquired by Lim Nee Soon (1879-1936), a well-known rubber magnate and “pineapple king”, from the colonial government in 1919. The main road Bah Soon Pah Road (华顺芭路) was constructed and named after him. Lim Nee Soon was fondly known as Bah Soon, where Bah is possibly Baba and Soon his name, due to his Peranakan maternal grandparents.

During the peak of his business in the 1920s, Lim Nee Soon owned large pieces of rubber estates in many parts of Singapore, including the Mandai area, and along Sembawang Road and Upper Thomson Road. 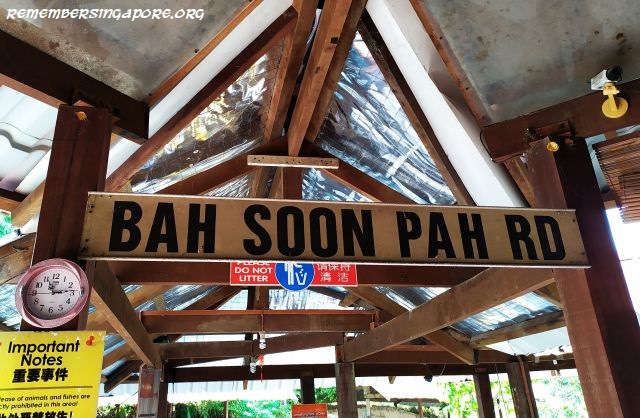 Bah Soon Pah Road was also commonly known as Sembawang Road 11th milestone by the locals. The road cut through rubber plantations and pockets of small farms and was frequently used by military trucks from the nearby Nee Soon Camp. In 1949, Bah Soon Pah Road became so badly damaged that the Singapore Rural Board considered banning the British military from using it.

The Great Depression caused the rubber prices in Malaya and Singapore to slump by 80% between 1929 and 1932. The rubber industry continued to decline throughout the 1930s and 1940s. In the fifties, the Bah Soon Pah area was converted by the Primary Production Department (PPD) from a rubber estate to a site meant for agricultural purposes. 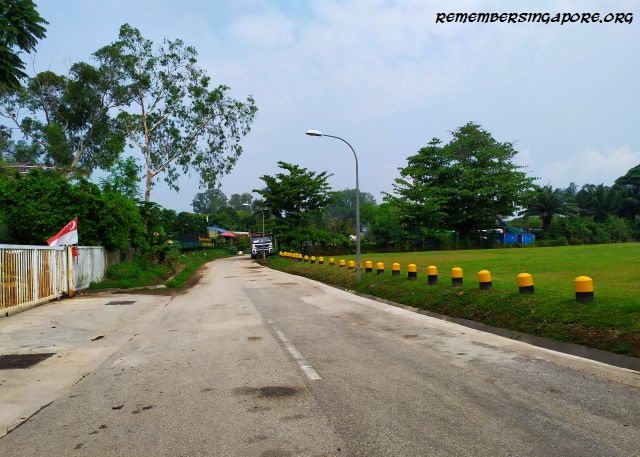 There were as many as 4,000 farmers living at the Bah Soon Pah area by the early sixties. In 1961, Singapore was hit by a drought and water supply disruptions. A water wagon had to be dispatched to Bah Soon Pah’s farms when their wells ran dry for the first time in the dry season that had already lasted for two months. Bah Soon Pah Road and other many other areas in Singapore were hit by another dry spell in 1972.

In the seventies, Bah Soon Pah was the site for several pilot projects launched by the PPD. In 1974, they collaborated with the Singapore Livestock and Agricultural Co-operative Society to set up a pig farm with mechanised feed system. A year later, a 40-acre parcel of land along Bah Soon Pah Road was reserved for a farm engaging hydroponics for its vegetable production.

Bah Soon Pah had at least two schools for the provision of basic education to the children living in the area. Onn Hwa Chinese School (旺华学校) was established in 1954 by a respectable Ng family living at Bah Soon Pah, who donated both funds and their lands to build the rural school. The school was made up of offices, teachers’ quarters and eight zinc-roofed classrooms. During its peak, Onn Hwa Chinese School had 500 students, many of them were children of the rubber plantation workers and farmers living at Bah Soon Pah.

Another school, Hua Nam Chinese School (华南学校), was set up in the late 1940s after the Second World War. It was merged from two pre-war schools called Hwa Soon School (华顺学校) and Kian Nam School (建南学校), which were founded by the Teochew and Hokkien communities at Bah Soon Pah. By 1959, Hua Nam Chinese School had grown to 4o0 students. Its old premises was upgraded in 1967, but it eventually walked into history in 1984 due to dwindling student enrollment. 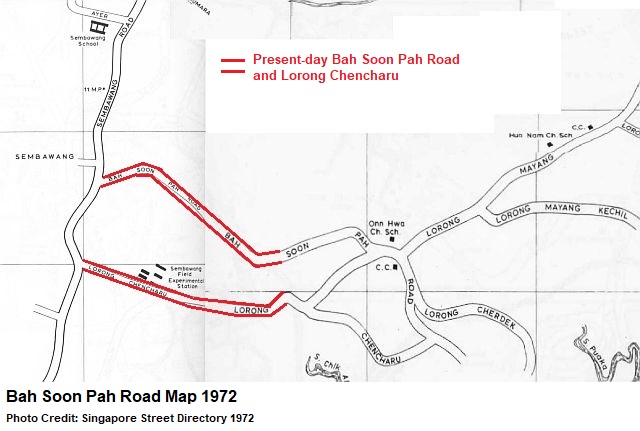 The present-day Bah Soon Pah Road is a remnant of its original longer form in the past, where it was linked to other rural roads such as Lorong Chencharu, Lorong Cherdek, Lorong Mayang, Lorong Mayang Kechil and Lorong Akar. Except for Lorong Chencharu, the rest were expunged when the vicinity was redeveloped as Khatib housing estate in the eighties. 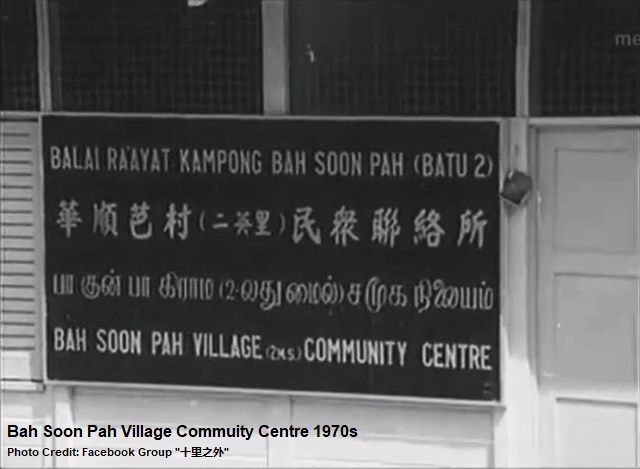 Hundreds of families living at Bah Soon Pah were progressively being resettled at the new Yishun New Town in the early eighties. There were, however, still some 4,000 to 5,000 residents living at Chye Kay and Bah Soon Pah villages in 1983.

Bah Soon Pah was briefly used by the Singapore Armed Forces (SAF) for their military exercises from 1980 to 1985. In the mid-eighties, a new Yishun Avenue 2 was constructed, cutting across Bah Soon Pah Road and Lorong Chencharu and shortening the two roads to their present states. 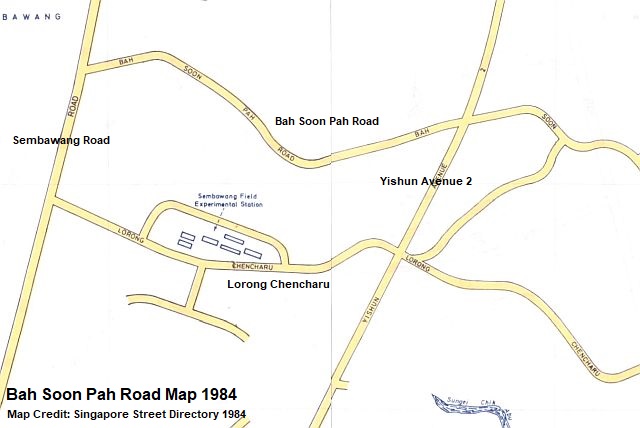 New Housing and Development Board (HDB) flats started appearing between 1986 and 1988, replacing several former roads, community centres and schools. The new North-South Line (NSL) of the Mass Rapid Transit (MRT) was laid along Yishun Avenue 2, where Khatib MRT Station was opened in late 1988. 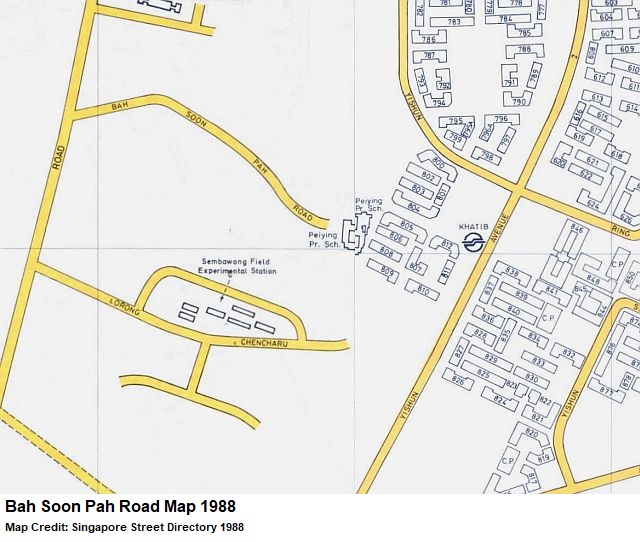 The double-storey black and white bungalow at Bah Soon Pah Road is one of the oldest landmarks in the vicinity. Built in the early 20th century, it was the residence for the manager of the Bukit Sembawang Rubber Company, who would oversee the management and operations of the rubber plantations in the vicinity.

Beside the bungalow was another cluster of buildings functioning as the company’s estate office. The estate office was moved to Chye Kay after the war, and the buildings were subsequently used as offices for the Labour Front Government (1955-1959) and Sembawang Field Experimental Station. 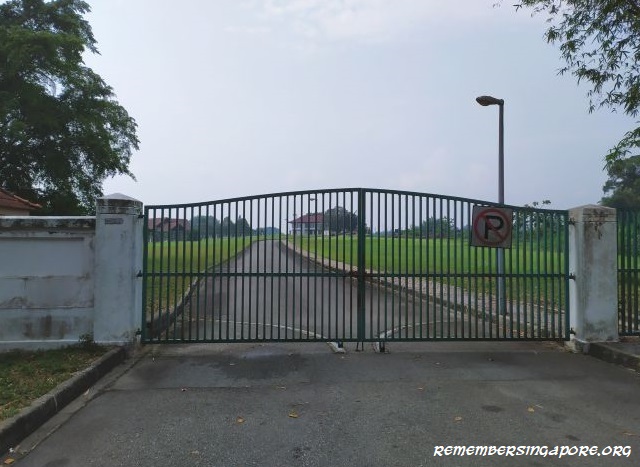 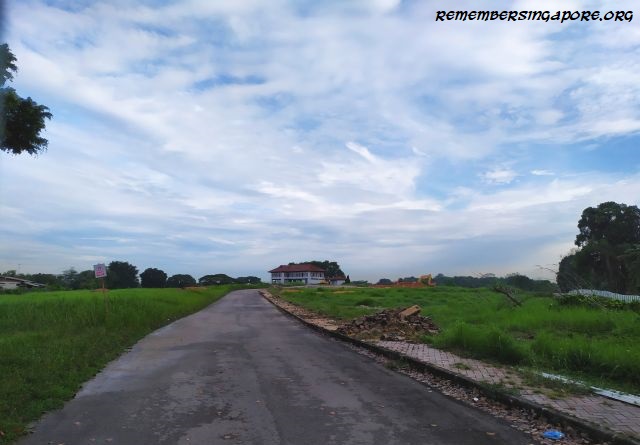 It was at the Sembawang Field Experimental Station where the Sembawang Farm School was initiated in 1966 to provide formal training to the next generation of farmers. Various courses such as animal husbandry, freshwater fisheries and horticulture were taught at the school. 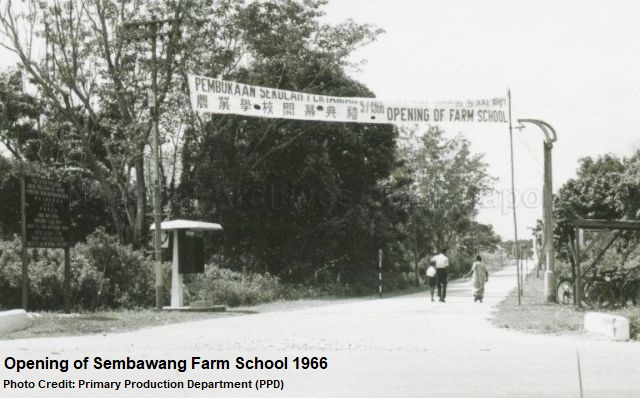 The bungalow became a Orchid Research and Service Centre in 1994. Opened by Lim Hng Kiang, then-Acting Minister of National Development, the centre aimed to propagate existing and new species of orchids for local production and exports. It later evolved into a Horticulture Service Centre to support the plant nurseries that had moved into Bah Soon Pah.

While most of the other buildings at Bah Soon Pah will be demolished during the redevelopment phase, the century-old bungalow is likely to be retained as part of the new housing estate’s history and heritage. 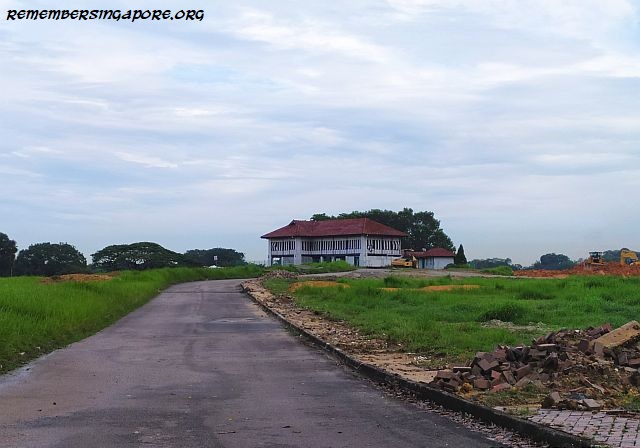 In the early 2010s, there were as many as eight plant nurseries operating at Bah Soon Pah Road, where it became a popular place for plant lovers and hobbyists. After just a few years of operation, the nurseries were concerned by some news that the vicinity would be redeveloped soon. However, a parliamentary response in 2013 assured that they could stay for ten years until the end of their leases.

In 2017, the plant nurseries were informed to move out by end-2021, and were subsequently given another five months of grace extension until May 2022 for their relocation plans. 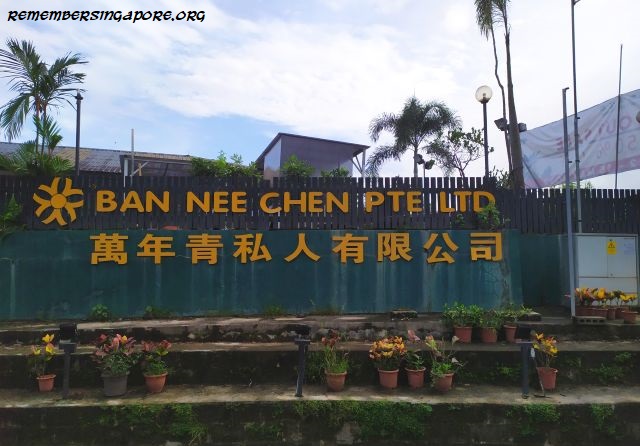 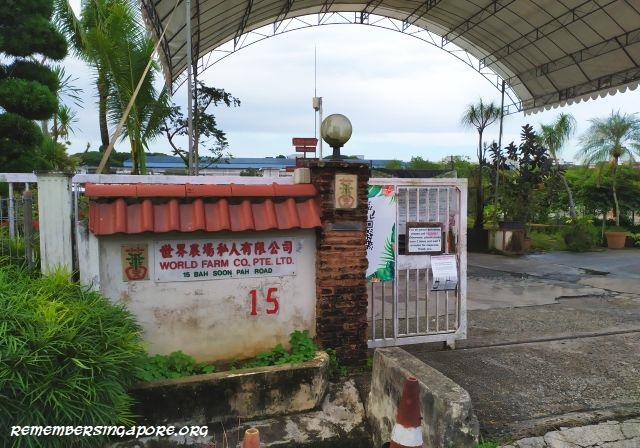 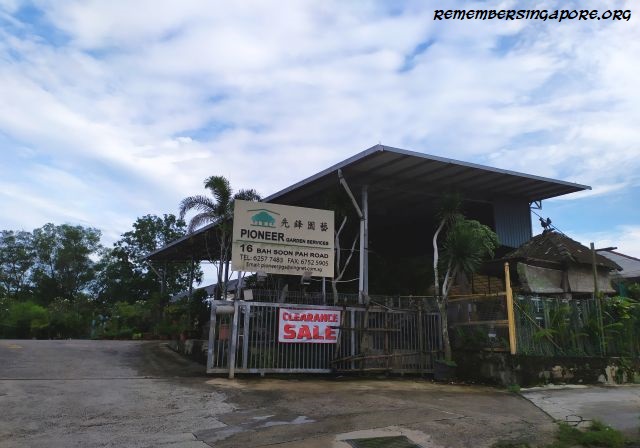 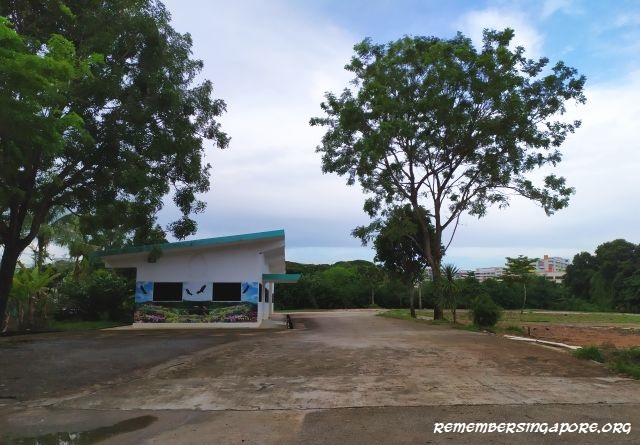 The Bah Soon Pah area had evolved from gambier, rubber and pineapple plantations to vegetable, pig and poultry farms, before taken over by orchid farms and plant nurseries. Its farming history will soon be over as it looks to be redeveloped into an extended housing estate of Khatib. 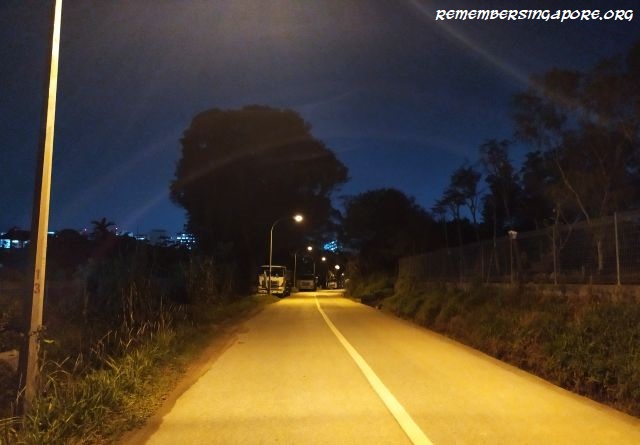 1 Response to Redevelopment of the Rustic Bah Soon Pah Road