There are two set of railways in Singapore; one northbound towards Malaysia (known as North-South Line) and the other is westwards to Jurong (Jurong Line). Malaysia railway operator Keretapi Tanah Melayu (KTM)’s North-South Line, also known as West Coast Line, runs along the western coast of Peninsula Malaysia from Padang Besar to Singapore.

The total length of the railway system in Singapore is about 40km; 26km belongs to the northbound railway whereas the Jurong railway is 14km long.

Constructed in 1902, the Bukit Timah Railway Station opened in 1915 as part of the Singapore-Kranji railway system. One end of the line, also known as Singapore Government Railway, ran though Cuppage Road, Newton Circus and Cluny Road to Tank Road Terminal. The other end was connected to Malaysia via Kranji and Woodlands. 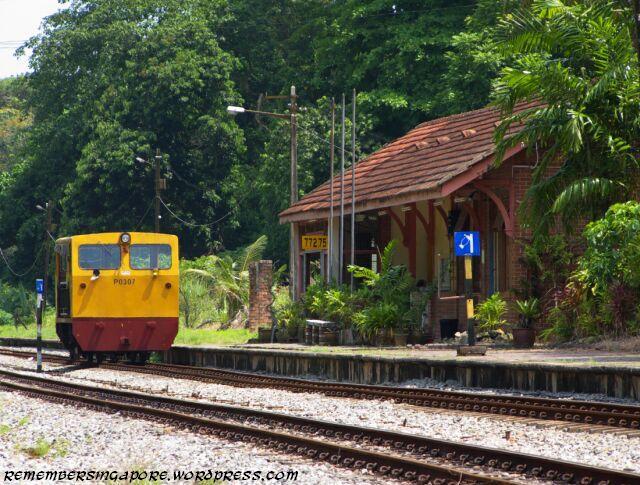 The government of Federal Malay States purchased the entire Singapore-Kranji Line in 1918 for a sum of $4.13 million. It was subsequently owned by Keretapi Tanah Melayu Berhad (KTMB).

After the Tanjong Pagar Railway Station was completed in 1932 and part of Singapore-Kranji Line (Bukit Timah to Tank Road Terminal) was dismantled in 1939, the Bukit Timah Railway Station gradually lost its importance. After 1940, passengers could no longer board the train at this station as it was used as a passing loop station.

When the Jurong Line became operational in 1965, Bukit Timah Railway Station acted as a freight interchange until the early nineties. From 1993 to 2011, trains have sped by without stopping here. There are still daily exchanges of tokens between the trains and the station masters. The tokens serve as proofs of authority that the trains are on the right tracks and are allowed to continue from Bukit Timah. 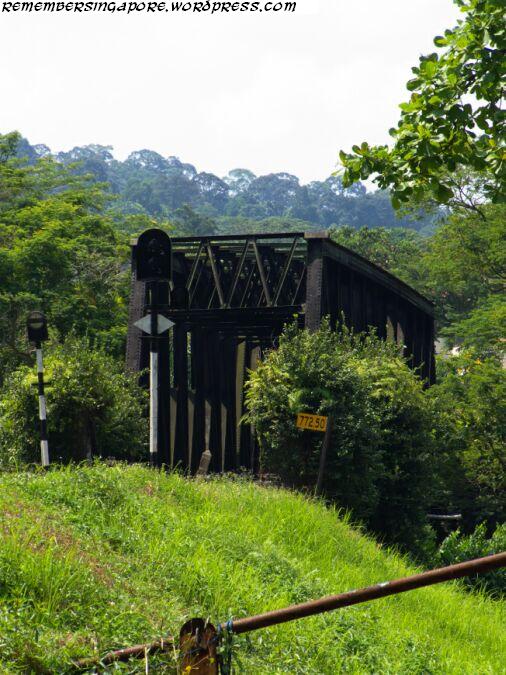 This cast iron railway bridge allows the trains to travel above the busy Bukit Timah-Dunearn Road.

In April 2011, the government announced that the conservation of the Bukit Timah Railway Station. 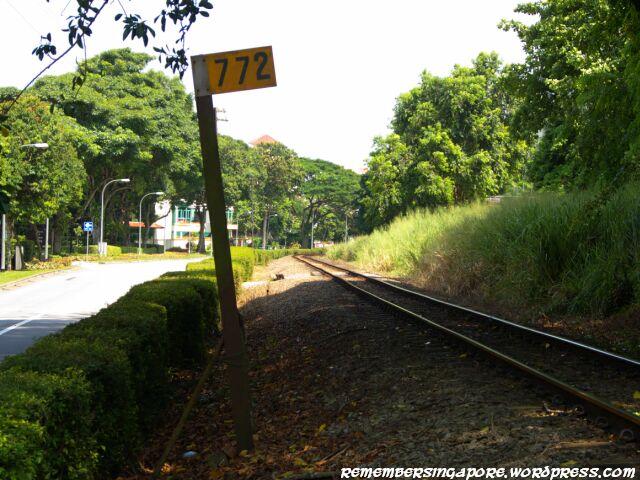 The entire North-South Line is about 950km and the starting point is at Butterworth of Penang. The yellow number sign represents the distance from the starting point, thus the one shown in the picture above tells us it is 772km from Butterworth. It is also 750m from the Bukit Timah Railway Station (which has the 772.75 sign). 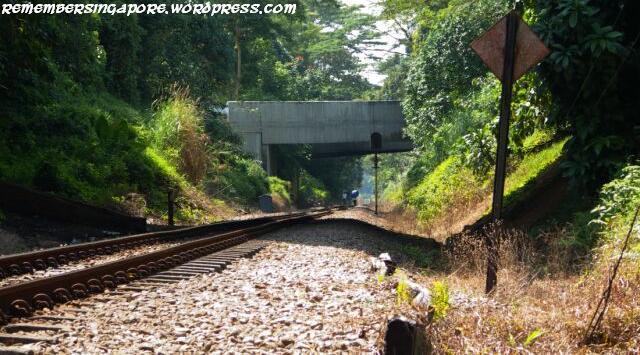 This stretch of Pan-Island Expressway (PIE) was constructed over the railway in the early eighties. 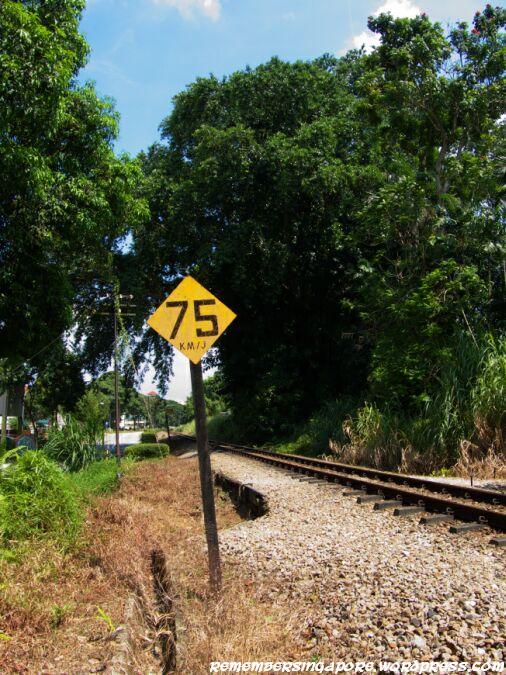 The speed of the train is limited to 75 km per hour. 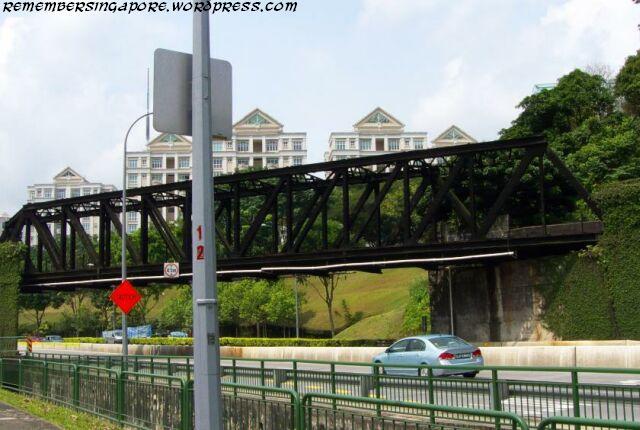 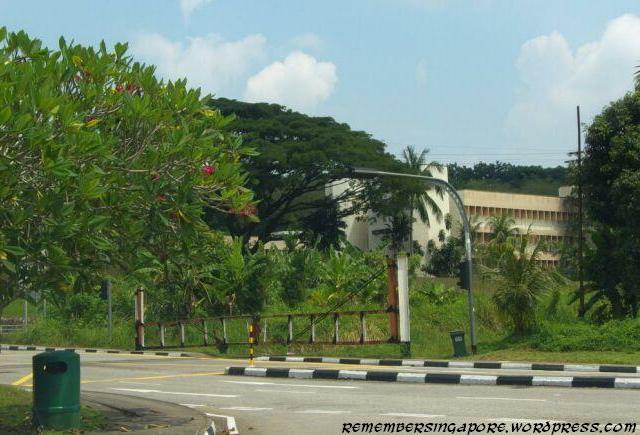 Passing by Singapore’s Ministry of Defence at Bukit Gombak, the train runs along the long Upper Bukit Timah Road and will soon approach Bukit Panjang. 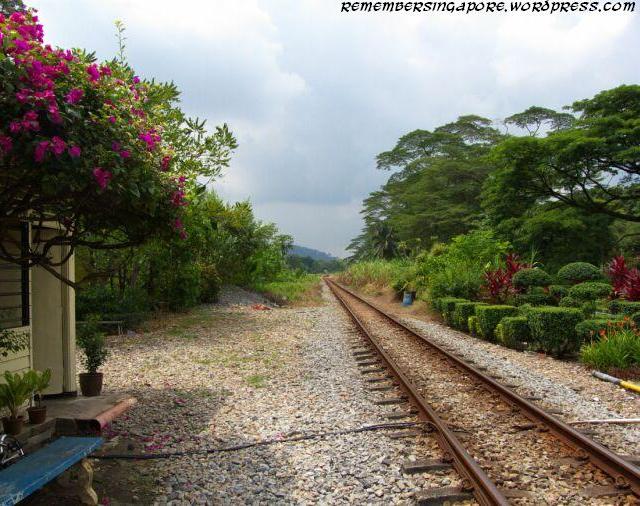 The tracks cut through a rather busy Choa Chu Kang Road and is near the junction where Upper Bukit Timah Road meets Bukit Panjang Road and Woodlands Road. 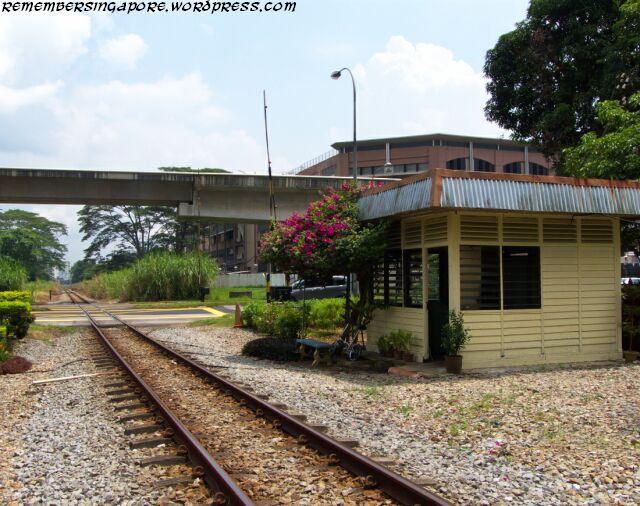 The area is not hilly enough to build a bridge, thus barrier system completed with traffic lights are set up here. A KTM personnel will activate the barriers when a train is approaching, stopping all traffic on both sides of the road. 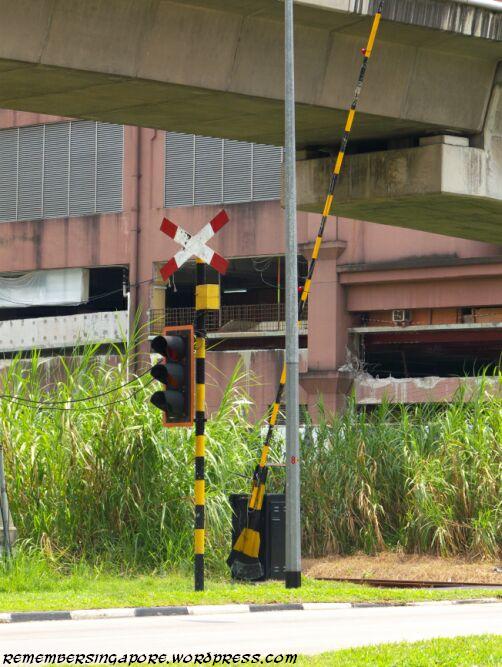 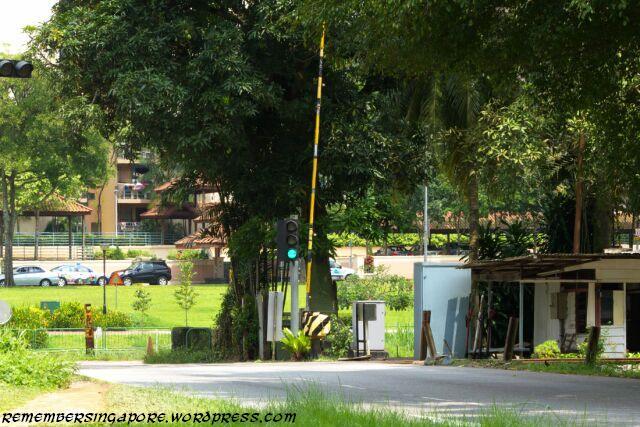 One more set of barriers, supervised by another KTM personnel, is stationed at Stagmont Ring, which links Woodlands Road to the new town of Choa Chu Kang.

Almost reaching the causeway, the train skirts past Kranji industrial area. which has  a pair of gates at the interception of Kranji Road and the railway.

One more KTM railway staff is responsible for activating the gates everyday for the trains to pass through.

This sign tells us it is about 761.25km from Butterworth, the starting point of KTM’s North-South Line. It is also 11.5km from Bukit Timah Railway Station.

In 1965, the 14-km Jurong railway was completed for trains to carry cargoes to the Jurong industrial area. Passing by warehouses, refineries and plants, the line ended at one of the ports in Jurong. However, its importance declined rapidly due to low usage, which finally led to its defunct in the late eighties after Ayer Rajah Expressway (AYE) was built. 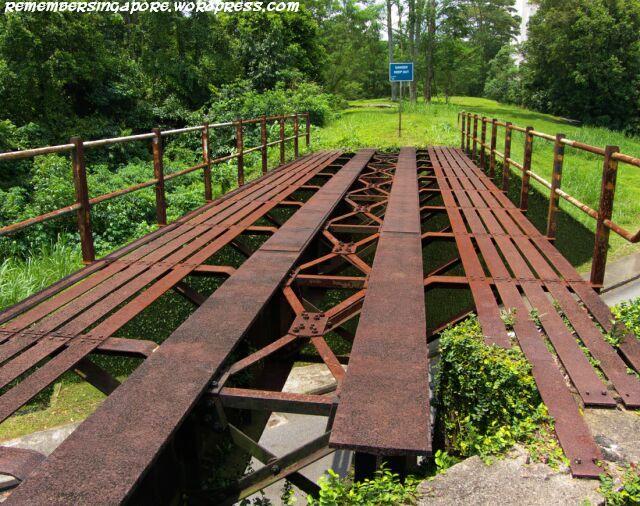 This short iron cast bridge spans over Sunset Way. Its railway, which was branched off from Bukit Timah Railway Station, was already dismantled.

The railway tracks in the other direction, though, are still intact on a tiny hill at Clementi Street 14, but are not easily visible with the overgrown weeds.

Extending over Sungei Ulu Pandan, this magnificent iron bridge is about 5m tall and connect the Jurong Line westward towards Teban Gardens. 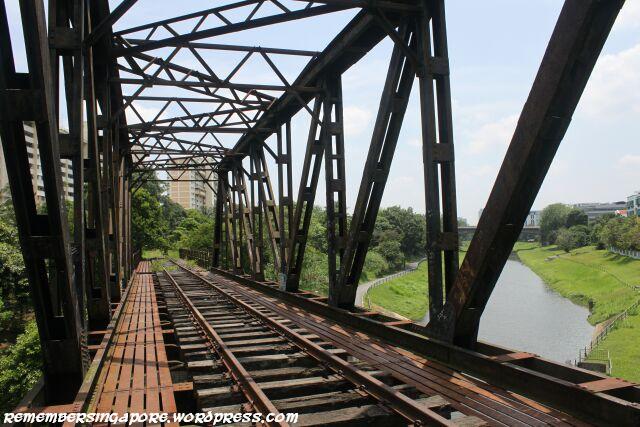 Forgotten over the years and without maintenance, the iron tracks have rust all over them and the wooden planks have started rotting due to daily exposure to sun and rain. Also covered by weeds and vines, it is quite a dangerous place for anyone who attempts to explore it. 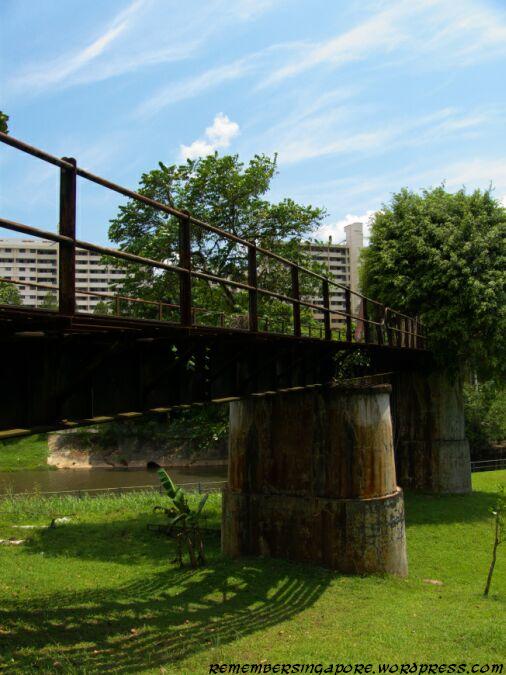 The westward railway tracks were laid along Sungei Ulu Pandan, and passed under the flyover of Clementi Avenue 6. 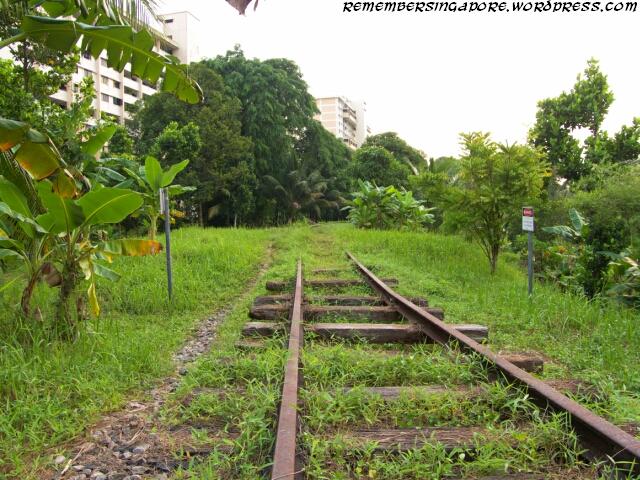 Near the Singapore Buddhist Youth Mission, a stretch of the railway is totally buried underground, before it re-emerges near Commonwealth Avenue West flyover. 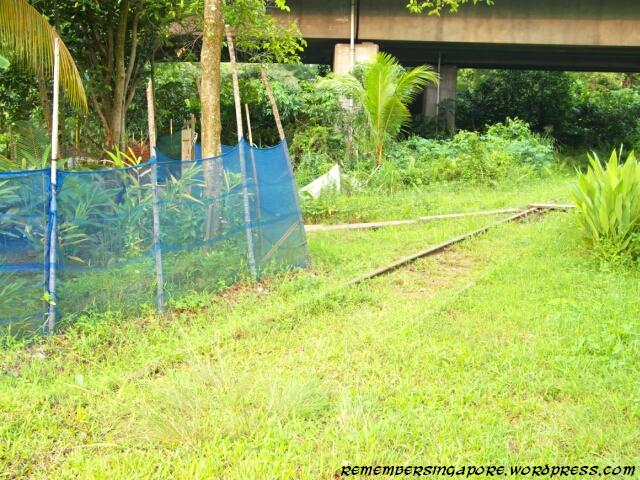 Thick overgrowth has covered certain parts of the forgotten tracks. Even some small trees have managed to grow in between the tracks.

The area is more lively now with the new Ulu Pandan Park Connector just beside the tracks.

As the railway continues its journey to the west, it cuts through a private estate known as Faber Estate. 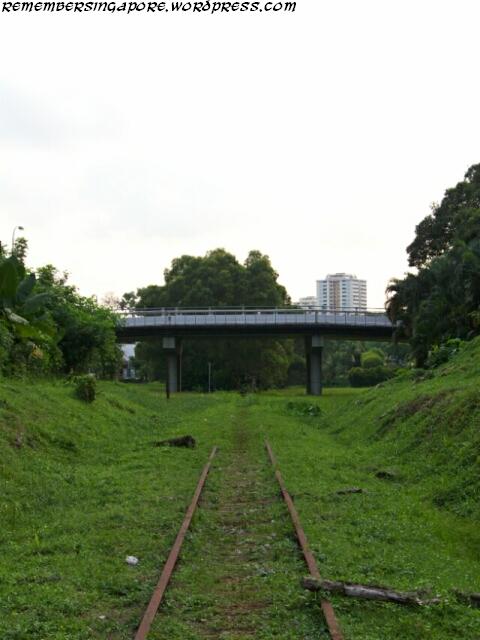 With AYE running parallel to it, the railway soon reaches Sungei Ulu Pandan once again, crossing the river in a smaller bridge compared to the one at Sunset Way.

Near Teban Flyover, lands were raised and tunnels were constructed over the railway tracks so as to allow the continuation of AYE.

However, the iron tracks were no longer around as they have been dismantled and removed recently. 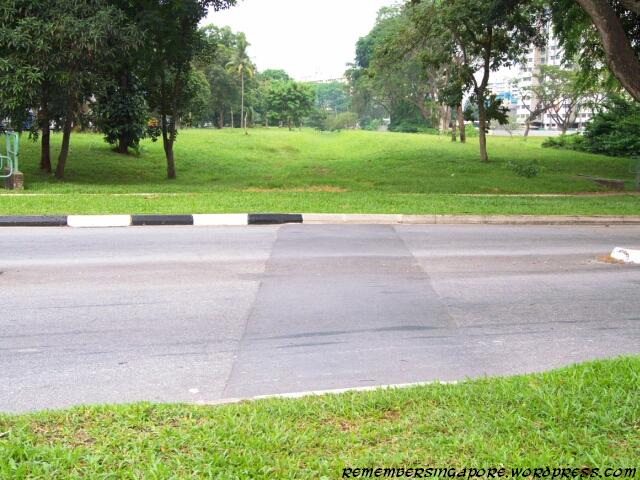 The removed railway tracks have left its marks on Penjuru Road. This should be a railway-road junction for a period of time before the tracks were removed, thus resulting in the different colour tones of the tarmac.

Just beside the road, a defunct railway traffic light stands lonely in the middle of very dense undergrowth, but the tracks can no longer be seen. 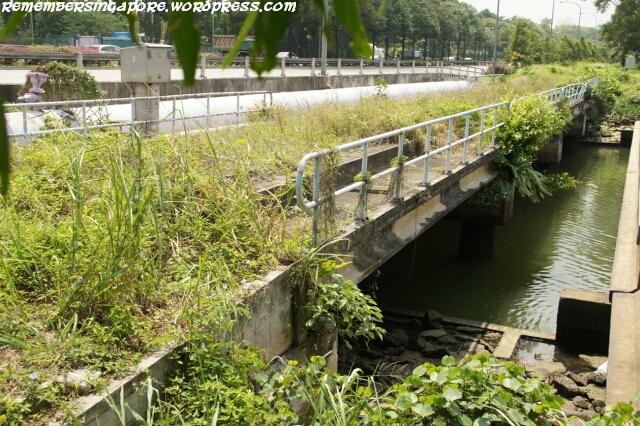 After Penjuru Road, the railway spans over Sungei Bajau Kanan, with AYE running by its side once again. 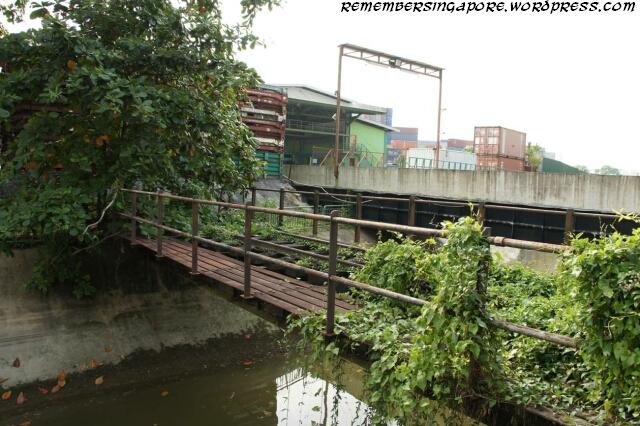 Before hitting Jurong Port Road, the railway flies over a small canal which is a small branch off Sungei Bajau Kanan.

The railway splits after Jurong Port Road; one to Jurong Port and the other leads to Shipyard Road, passing under the roundabout junction between Jurong Pier Road and Jalan Buroh.

The tunnel at the roundabout junction is currently covered with thick vegetation.

The railway makes its way over the last bridge of its Jurong journey at Tanjong Kling. The bridge is built over Sungei Kajau.

The last visible tracks are found near Shipyard Road, before they disappear in the restricted compounds of Exxon Mobil.